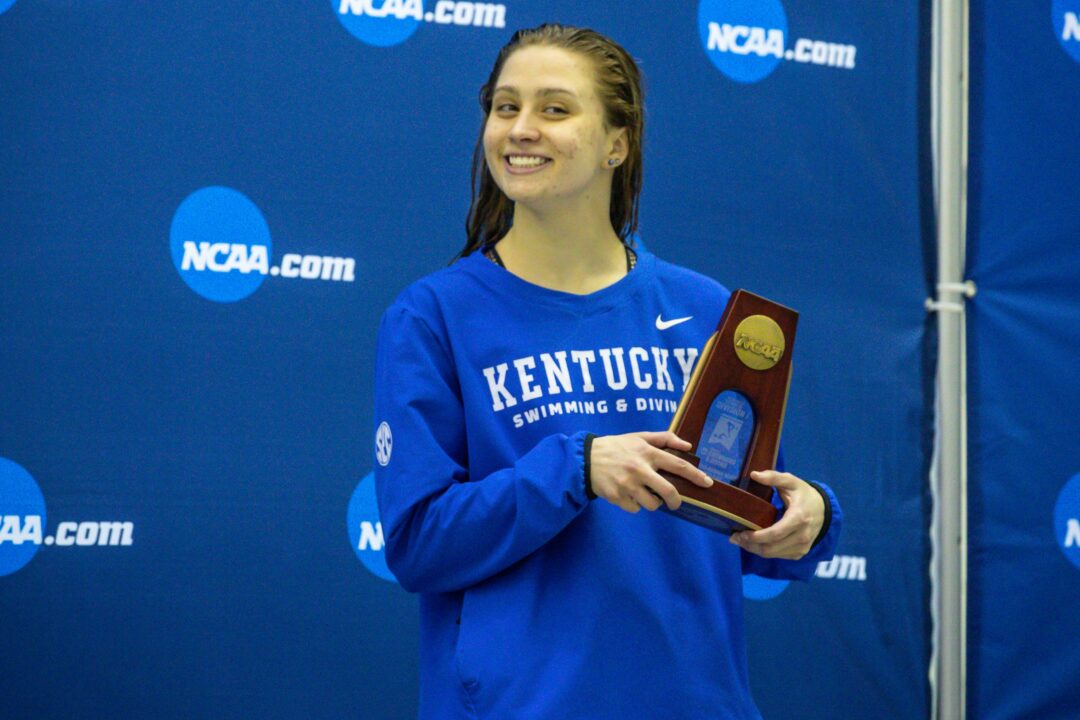 The team's highest scorer at NCAAs Lauren Poole returns for her senior season and have a class of incoming freshmen coming in to fill gaps. Archive photo via Jack Spitser/Spitser Photography

The Wildcats were coming off of a SEC Championships and 11th place finish at NCAAs during the 2020-2021 COVID-19 season. They only lost one NCAA qualifier for the season.

The team had another exciting season, squeaking out a second place finish at SECs (finishing ahead of Alabama by five points) and moving on to finish 12th at NCAAs. Notably, they were one of three teams to finish in the top 12 that did not have any first, second, or third place finishes.

The team loses Riley Gaines who finished fifth at NCAAs in the 200 free. At SECs, she won the 200 free and was fourth in the 100 free as well.

The good news for the team is that they return fifth year Izzy Gati who swam the 200 free at NCAAs last year swimming a 1:45.57 to finish 22nd and was only slightly over half a second off of making the B final. Gati has a best time of 1:44.27 which she swam leading off the team’s 800 free relay back at the 2021 NCAA Championships. That best time would have made the B final in 2022.

Also good news for the team is that they bring in numerous girls as freshmen who have potential in the sprint freestyle events.

The group of incoming freshmen is slightly faster than last year’s sprint freestyle freshman and also displays more depth in the 200 free.

The distance free group had three swims at NCAAs with two in the 500 and one in the 1650, although they scored 0 points.

Sophomore Megan Drumm had a huge season for the team, dropping almost two seconds in the 500 free as she swam a 4:46.97 at midseason. She was unable to hit that time again at SECs or NCAAs, but is on the right trajectory from season to season.

Izzy Gati swam the 500 at NCAAs but was slightly off her time of 4:42.71 from SECs. Her time at SECs was a best time. Like Drumm, Gati also changed her event lineup this season and this was the first season for her to swim the event.

Potentially joining the distance group will be Jordan Agliano who has a best time of 4:47.22 in the 500. Notably, she swam that in March so she is on a positive trajectory in the event.

The team had numerous backstroke qualifiers at NCAAs but will be on the thinner side as most of them were seniors. Fortunately, the team has multiple solid backstroke recruits coming in.

Leading the way in the 100 was Caitlin Brooks who swam a 52.16 at NCAAs to finish 24th. Brooks was slightly off her season best as she swam a 51.46 leading off a relay at SECs.

Also key for the team this past season in the 100 back were seniors Sophie Sorenson (52.11) and Parker Herren (53.23). Neither will be taking a fifth year, so the depth in the 100 back will be getting smaller from the returning-swimmers perspective.

Brooks has been much faster though as she swam a 1:50.73 to finish second in the event at SECs. That time would have finished seventh at NCAAs so if she is able to replicate that time again, she could be a huge boost in backstroke points.

Davey returns in good shape for her senior season and has a best time of 2:05.59 in the 200 from 2021 SECs. She has dropped almost a whole five seconds in her first three years and had a solid swim in the 200 long course at US Nationals where she swam a 2:28.13 for fifth place.

Poole also returns in good shape for her senior year as she has dropped in the 200 breast all three seasons at Kentucky. She entered as a freshman with a best time of 2:13, dropped to a 2:11 freshman year, a 2:07 sophomore year, and now a 2:06 junior year. This progression is huge and notably her 2:06 in finals at NCAAs would have made the A final if she swam it in prelims.

Joining Davey and Poole will be incoming freshman Denise Phelan who has a best time of 1:00.62 and 2:11.23 SCY. Notably, that time would have made Phelan the second fastest on the roster this past year only behind Bonnett who has since graduated. Phelan had a huge swim in the 200 LCM at US Nationals swimming a 2:30.54 in prelims which also was a best time by over a second.

Brooks swam a best time in the LCM 100 this summer at US Nationals which should set her up well for the fall.

The incoming freshmen are very deep in the butterfly events, especially in the 100. Jordan Agliano is not far off making NCAAs in the 100 already.

Bailey Bonnett and Lauren Poole both made the B final at NCAAs in the 200 IM, but only Poole will be returning. The also both had huge A final swims in the 400 as Poole was fifth and Bonnett was seventh. Poole went a 4:04.17 but has been as fast as 4:02.73 which she swam to finish third at 2021 NCAAs.

Kyndal Knight returning is huge for the diving squad as she scored in the B final of all three diving events at NCAAs scoring a total of 9 points. She wasn’t the only diver at NCAAs though as junior Morgan Southall was also in attendance.

Both divers return this season which is huge as they were the only divers for the team at SECs.

The teams freestyle relays look to be very underclassmen heavy as the team brought in many sprint freestylers the last two years.

Overall, the team is generally stronger at the 200s of each stroke than they are in the 100s, making scoring in the medley relays also slightly more difficult. If the 800 medley relay was a thing, the Kentucky women sure would be up there as a title contender.

Their medley relays have potential especially if some of the incoming freshmen are able to step up in the short distances which can also shift some of the upperclassmen allowing them to focus on their more distance-oriented strengths.

The NCAA team was very upperclassmen heavy this past year, and is taking many more hits than it did this past year. The good news is that the team brings in strong recruits especially to replace where they scored points in at NCAAs such as the 200 backstroke, 200 breaststroke, and IMs. The team has at least one swimmer overlapping in most events they scored in at NCAAs which could potentially help develop the underclassmen and incoming freshmen.