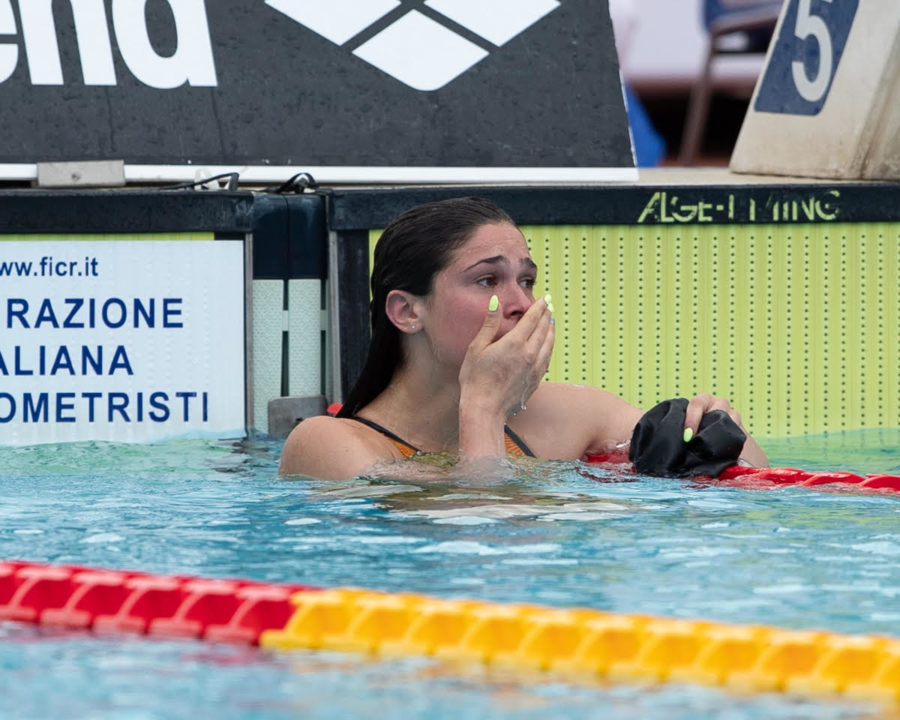 14-year-old Italian swimmer Benedetta Pilato already qualified to represent her nation at next month’s World Championships in Gwangju, Korea, but the teen is not simply resting on her laurels.

Instead, Pilato continues to get even faster, first lowering the Italian Junior Record in the 100m breast (1:08.74) on night 1 of the 2019 Sette Colli Trophy, but also by smashing a new senior Italian Record today.

In this morning’s prelims of the women’s 50m breast, Pilato fired off a super quick mark of 30.13 to take the top seed and surpass the Italian National Record of 30.30 set by Arianna Castiglioni at the 2018 European Championships.

Pilato now ranks #3 in the world this season, only behind American Lilly King and Russian Yuliya Efimova.

On the all-time performers’ list, the teen now checks-in as the 13th fastest ever in the women’s 50m breast, with the final yet to come tonight.

The World Junior Record remains at the 29.86 recently-retired Lithuanian Olympic champion Ruta Meilutyte clocked back in 2013, but with the way Pilato is swimming, that record is officially on notice.

That’s a big yikes from me. Wow that’s fast

Mind = blown. A question to our Italian friends, could it be that this girl is training under some type of USRPT regime? The 50 is her best event, she is throwing down PBs all the time… Or maybe she is just crazy young and crazy fast 🙂

Since last Autumn Pilato’s team is under the supervision of Max di Mito who is the coach whom discovered Federica Pellegrini and brought her to Athens 2004.

She is training under her coach but I think the sinergy with Di Mito is clearly beneficial for her.

Thanks, JFG. I guess some people misunderstood, I was asking about a Micheal Andrew type of training, nothing fishy

No worries, I understood you (I have been following MA for a whilr now).

As far as I know, in Italy I believe there is nobody doing it like MA does; perhaps certain time of the year o similar like Rossetto’s group does with Dotto & Condorelli or Nozzolillo does with Di Pietro & Ferraioli, a lot of pace work and max speed but combined with aerobic sets depending on the time of the year

Read this first as “14-year old piano nails Italian..” and was like wow SwimSwam being sassy hahaha