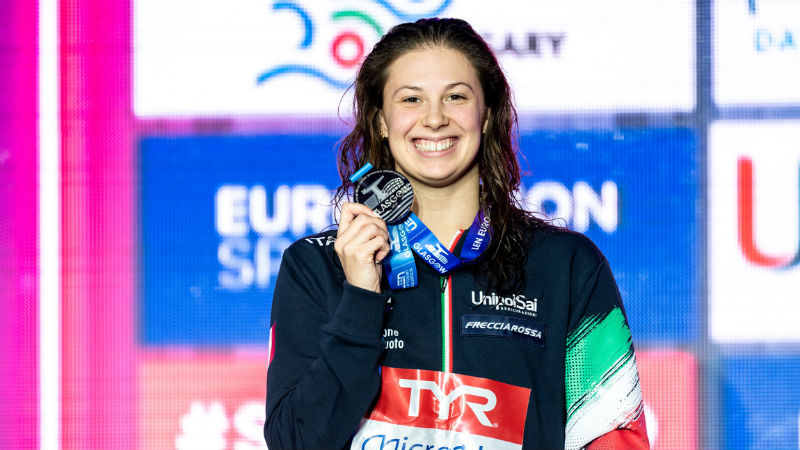 After a silver medal in the 100 breaststroke, Italy's Arianna Castiglioni has scratched her final individual race of the meet in the 200 breaststroke. Archive photo via Andrea Staccioli / Deepbluemedia / Insidefoto

Women’s 100 breaststroke silver medalist Arianna Castiglioni has withdrawn from Saturday’s 200 breaststroke, which leaves a possible swim in the women’s 200 medley relay (possibly in prelims or finals, but probably not both) as her last remaining swim of the meet.

Castiglioni is one of 4 Italian women who have broken a National Record in a breaststroke race this year, but in the 200 meter event. She was seeded 12th in the 200 breaststroke on the entry lists, but that made her just the 4th-best Italian in the event. In spite of her medal in the 100 breaststroke, her time of 1:05.01 was about 6-tenths from her best, meaning that finishing among the top 2 Italian women and advancing to the finals was a long-shot anyway.

Hers was the only significant scratch for the last preliminary session of the meet.

That women’s 200 breaststroke will be one of the morning bloodbaths that we’ve seen all week, where 3 swimmers from the same country are battling for 2 spots coming out of prelims. The Russian trio of Evgenia Chikunova, Mariia Temnikova, and Daria Chikunova are the top 3 seeds in the race, including a battle of sisters between 15-year old Evgenia and 20-year old Daria.
The other races to watch on Sunday will be the women’s 50 free, which will include a number of swimmers who have been stars all week long. That includes the Olympic champion Pernille Blume of Denmark, and a group of swimmers like Maria Kameneva of Russia, Beryl Gastaldello of France, Freya Anderson of Great Britain, and Kasia Wilk of Poland who have been exploring their countries’ record books this week.

Anderson, who is being written as the new female star of British swimming, is also scheduled to race the 400 free on Sunday morning.

Anyone seeing the similarities to Katie Meili or is it just me???