10 Things We Noticed on Day 2 of the 2014 U.S. Junior National Championships 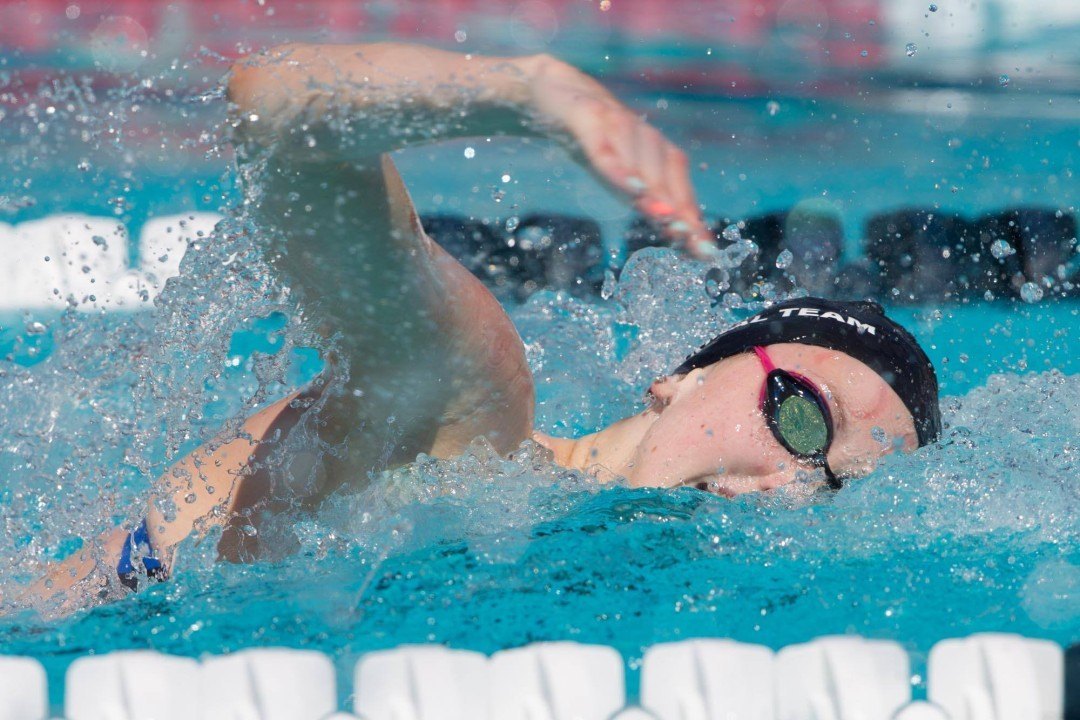 If you want to know the next star of U.S. women’s sprinting, or I guess the next, next star, after Lia Neal, and Simone Manuel, look no further than high school senior (1) Amy Bilquist from the Carmel Swim Club. She’s 6’3″ tall, and she swam a 54.85 to win the women’s 100 free.

That’s her lifetime best as compared to pre-meet by seven-tenths of a second: she had been a 55.59 coming in. This is her first long course taper since moving to Indiana to train with one of the best women’s high school sprint programs in the country. Last summer, training with the Scottsdale Aquatic Club (another very good sprint program), she was 57.14 at Junior Nationals.

That swim makes her the 6th-fastest American of any age in 2014. She’ll have to fight at senior Nationals next week to keep that ranking, and it’s going to probably take under 54 to make Pan Pacs team, but Bilquist isn’t far off of there. I’d give better than 50/50 odds of her making the Olympic Team in 2016.

Not swimming in that 100 free was Blake Pieroni, who is a part of the group just here to warm up for senior Nationals next week. Pieroni was on the World Juniors roster last year, and had he swum the individual might have given Haas a run for his money. Pieroni, who is headed to Indiana this fall, (4) split a 49.55 on the Indiana University Swim Team winning 400 free relay. He’s still entered to swim the 50 free individually, for now.

Once again, (5) the trend continued and almost all of the individual winners were slower than last year. Bilquist was the lone exception. If Haas stays in the 200 and 400 free, he’ll crush that trend – especially in expecting to beat his own Meet Record and winning time in the 400 free of 3:51.99 from last year.

(6) The relay winners were faster, however. That says that the top teams are just getting deeper and deeper.

(7) Her transition has been much talked about, but a couple of years ago, who would have guessed that 16-year old Allie Szekely would be a Junior National Champion in the 200 backstroke (2:11.29)? She was one of the greatest young breaststrokers we’ve ever seen until about age 14, though she did struggle with some DQ problems due to the unique kick she used. We, for one, can’t wait until Szekely is about 18 or 19 to see where her 200 IM sits. She’s very Katie Hoff-like in her ability to excel in both the breaststroke and backstroke races, at a young age, by themselves.

(Bonus) Courtney Mykkanen, another member of the Youth Olympic Games team, also raced the 200 backstroke, but didn’t fare quite as well. She was 42nd in prelims with a 2:19.63. She’s from the home team Novaquatics though, so she didn’t travel for the meet and has less incentive to rest for it rather than train straight through to Nanjing.

Is the finish of the first and second swimmer in the Girl’s 200 back C-Final legal?

I didn’t see Amy Bilquist so tall. 6’3”? Like Missy! It can help on sprint.
Great prospect for the future.
But we can’t forget the second of the race, Stanzi Moseley. She’s the revelation of that event. Nice time drop from 56.27 to 55.03. She finished close to Bilquist.
The 50 free should be another great battle between both girls.

Like you I’m impressed by the 14-year-old kids at this meet.

I can’t mention everybody!
And please reply Braden Keith, not me. 😯
I didn’t write the article above! By the way, a very good article. 😉
About Ruby Martin, yes, she has a great potential.

I thought any member of the World Championship Team has the right to post a time for consideration to challenge a spot for the relay teams.