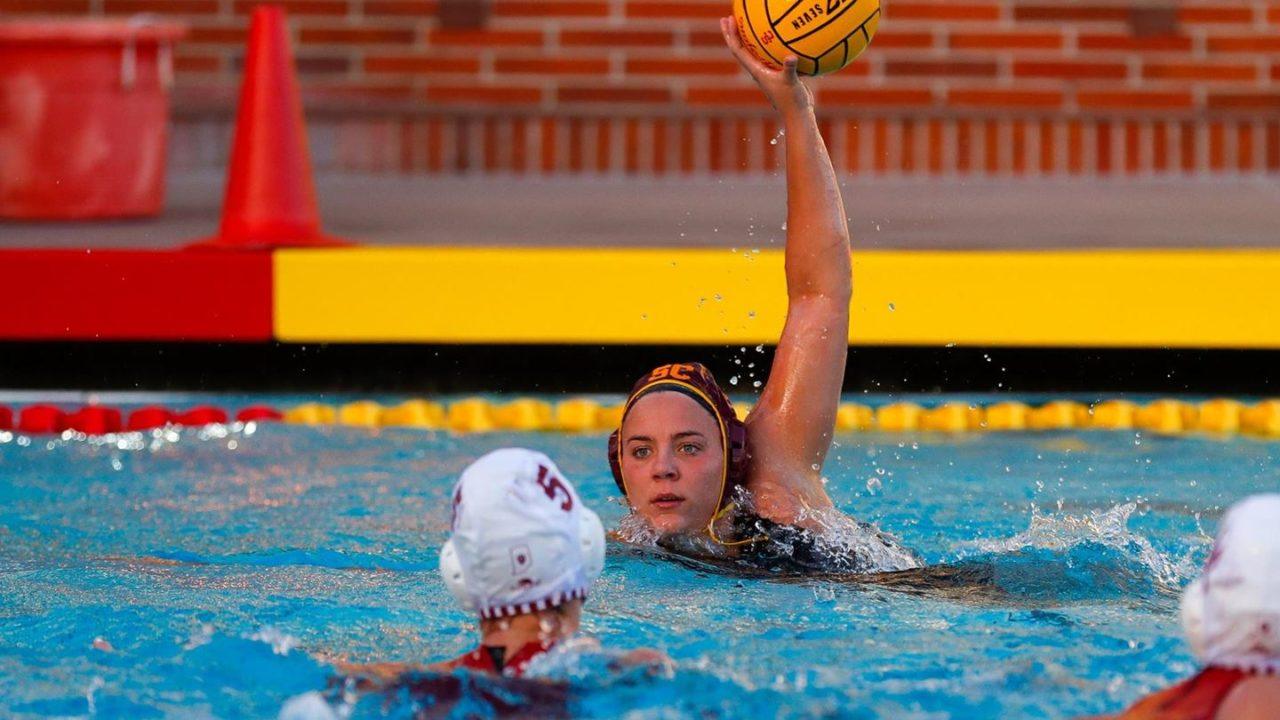 The top-ranked Women of Troy ride a 29-game win streak into action at the competitive Barbara Kalbus Invitational this week in Irvine. No. 1 USC is grouped up with No. 8 Arizona State, No. 25 San Diego State and No. 9 UC Santa Barbara for this one, opening up against the Aztecs in a 10 a.m. opener on Friday (Feb. 22). USC will face off against either the Sun Devils or the Gauchos in a morning match on Saturday (Feb. 23). Two wins in group play would carry the Trojans into a 2:45 p.m. semifinal that afternoon. The tournament championship game is set for 1 p.m. on Sunday (Feb. 24), preceded by an 11:30 a.m. third-place game.

BKI NOTES
This year’s edition of the Barbara Kalbus Invitational features 16 teams, including six MPSF teams in Arizona State, Cal, San José State, Stanford, USC and UCLA. The teams will open up action playing through four-team brackets, designated as follows:
Bracket A: #1 USC, #8 Arizona State, #9 UC Santa Barbara, #25San Diego State
Bracket B: #2 Stanford, #7 UC Irvine, #10 Pacific, #21 CSUN
Bracket C: #3 UCLA, #6 Michigan, #12 LMU, #17 Long Beach State
Bracket D: #4 Cal, #5 Hawai’i, #13 San José State, #17 UC San Diego
Saturday afternoon will feature semifinal games, with placement games taking place on Sunday. Last year at the event, USC opened up with a solid 17-1 win over San José State in its first game of group play. The next morning, USC pulled out a tight 8-6 win by making a late move to break a 5-5 tie and lean back on its defense to claim the victory over No. 6 ASU and secure a semifinal spot. Up against No. 2 Cal in the semis, USC’s defense reigned supreme again. Goalie Amanda Longan locked in a career-high 18 saves, while Annika Jensen delivered her second hat trick of the day to get the Trojans back to the title match. On Sunday, USC’s competitive Saturday competition caught up with the Trojans, and No. 1 Stanford was able to build a lead and stymie USC in the title match with a final 9-3 victory over the defending champs as the Trojans took their first loss of the year.

LAST ACTION
USC cranked out a 19-1 win for an MPSF-opening victory in topping conference newcomer Indiana last week at Uytengsu Aquatics Center. Four Trojans had hat tricks in the win, led by a four-goal outing from junior Maud Megens, who climbed to No. 18 all-time at USC in scoring with her team-high effort. Fittingly, Megens struck first for the Trojan cause, taking a feed from fellow junior Kelsey McIntosh for a 1-0 lead on USC’s first possession of the game. In that first frame, USC had six different Trojans score, with Megens, McIntosh and Grace Tehaney all getting to the back of the net to start up their individual pushes to hat tricks on the day. Indiana got one goal to go late in the first period, making it 6-1 after eight minutes of action. The Trojan defense buckled down after that, rendering Indiana scoreless for the last 25-plus minutes of the game, Offensively, USC hammered in seven more goals before halftime. Tehaney and McIntosh both had their hat tricks in place by the halftime buzzer, while freshman Bayley Weber tallied two of her final three during that second period as USC built out a 13-1 halftime lead. In the third, Weber notched her third before Megens punched up back-to-back goals to make it four on the day and make that move to No. 18 on the USC career scoring charts. Paige Hauschild issued the last goal of the third, and USC clutched a 17-1 advantage with eight minutes to go. In that final stretch, two new Trojan scorers got in on the action. Randi Reinhardt unleashed a lob to make it 18-1, ad then Sabrina Garabet laced in the last of the day to wrap a 19-1 USC victory.

SWEEPS WEEK
USC made it a sweep of the MPSF weekly honor roll after standout performances by Trojans at the Triton Invitational. Picking up her first career award as a Trojan was freshman Alejandra Aznar, who has been named MPSF Newcomer of the Week. Senior goalie Amanda Longan, meanwhile, secured her third career pick as MPSF Player of the Week. Aznar scored in all four games in USC’s run to the Triton Invitational championship, accumulating six goals at the tourney. Aznar had one goal in USC’s opening 15-4 win over Pomona-Pitzer before unleashing three in a 16-5 win over No. 13 LMU to wrap group play. Aznar would score again in USC’s 10-3 semifinal victory over No. 8 Michigan before adding her sixth of the event during USC’s 10-3 win over No. 3 UCLA in the title match. Aznar now stands as USC’s second leading scorer with 19 goals in helping USC to a 12-0 start to 2019 and to USC’s sixth consecutive Triton Invite title. Longan had three consecutive double-digit save efforts in USC’s run to the Triton Invitational. Along the way, Longan registered seven shutout periods of work. In the opener vs. Pomona-Pitzer, Longan had three saves and allowed no goals in her one half of action in the 15-4 win. Against No. 13 LMU, Longan had 10 saves in three periods in the cage while giving up just two goals in that span. On the final day, however, Longan’s dominance would grow greater. She collected a season-high 14 saves in a 10-3 win over No. 8 Michigan in the semifinal before making 11 stops against No. 3 UCLA to help beat the Bruins 10-3 and claim the tournament crown for the sixth straight year.

CLIMB ON
As the 2019 season gets underway, the Trojans already have players climbing the career charts. With her fifth goal at the UCSB Winter Invitational, junior Maud Megens tallied her 100th career goal as a Trojan on Jan. 18. Megens now ranks No. 18 all-time at USC in scoring with 128 career goals. On the defensive end, senior goalie Amanda Longan entered her senior season ranked No. 3 all-time at USC in career saves. She’d haul in a career-high 19 saves in USC’s season opener to tally the second most single-game saves by a Trojan. The next week, she collected her fourth career complete-game shutout, The senior now grips 679 career saves.

BY THE NUMBERS
Now 13 games into 2019, USC has outscored opponents 210-35. Junior Maud Megens is the Trojans’ top scorer to date with 33 goals. Behind her on the 2019 scoresheet sits sophomore Paige Hauschild with 21 goals and  true freshman Alejandra Aznar and with 19. They’re followed by freshmen Tilly Kearns with 17 and Mireia Guiral with 16. On the defensive end, two goalies have checked into the cage to date. Senior Amanda Longan has logged minutes in 10 games, averaging 11.65 saves and 2.47 goals-against per game. She also boasts the second most single-game saves by a Trojan, having made a career-high 19 stops vs. Cal Baptist on Jan. 19. Redshirt sophomore Holly Parker has stepped in in seven games, averaging 7.56 saves and 3.11 goals-against per game to date. The Trojan defense has rendered opponents silent in at least one period of play in all but one game while accumulating a grand total of 28 shutout periods this season so far, including back-to-back complete-game shutouts. Overall, USC is averaging 16.15 goals per game on the offensive end and is allowing just 2.69 goals-against per game defensively.