#1 in the Class of 2018, Eva Merrell Hands Verbal Commitment to UGA 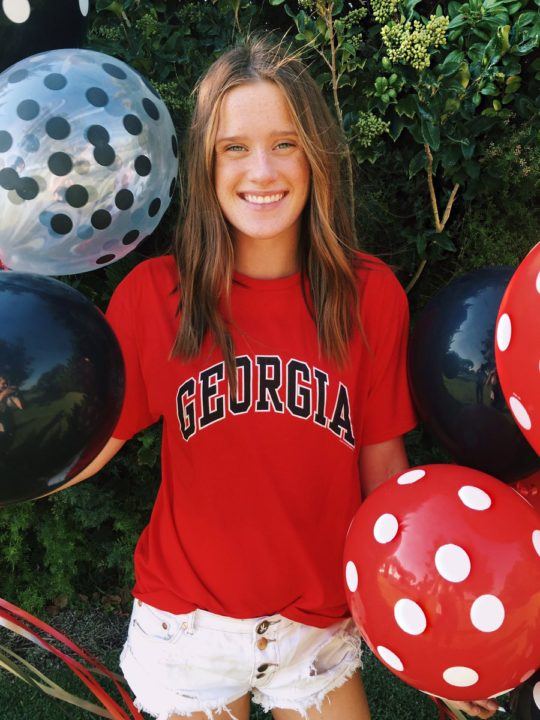 Eva Merrell, the top girls’ recruit in the high school class of 2018, has elected to make her verbal commitment to the University of Georgia class of 2022. Current photo via Eva Merrell (Instagram)

Eva Merrell, the top girls’ recruit in the high school class of 2018, has elected to make her verbal commitment to the University of Georgia class of 2022. She wrote on her social media:

“i am so truly honored&excited to announce my verbal commitment to UGA!!! GO DAWGS❤️????”

Merrell is a senior at Newport Beach’s Crean Lutheran South High School and swims year-round with Aquazot Swim Club. Known primarily as a butterflyer, she has dropped gobs of time in the backstroke over the last year and leads the class in that discipline. She has also just begun showing what she can do in the 200 fly: last fall she went from a 2:03 to a 1:56 in SCY. But that’s not all; she is also a solid freestyler who will be an asset to any number of relays.

A two-time USA Swimming Scholastic All-American, Merrell broke a total of 7 CIF-Southern Section Division II records this past May. She and her Crean Lutheran teammates took down the previous Crean mark in the 200 medley relay twice (she split a 24.55 50 back leadoff), she broke the 100 fly record twice (settling it at 52.51), Crean broke the 200 free relay twice (with a 23.41 leadoff from Merrell), and Merrell lowered the 100 back mark that had been set in prelims, going 53.12 in finals.

Merrell won the 200 back in the Big Ten vs. USA College Challenge meet last fall, dropping 5.2 seconds to go a lifetime best of 1:52.20. She also went a PB in the 100 back to finish third. At U.S. Olympic Team Trials she was a finalist in both the 100 fly and 200 back, finishing 5th and 6th, respectively. Merrell traveled to FINA/airweave Swimming World Cup 2016 with Team USA last fall, and represented the Red, White, and Blue at 2016 Junior Pan Pacs.

Merrell’s best 200 back and 100 fly times would already score at NCAA’s and her 100 back isn’t far off (she would have been 26th out of heats at 2017 NCAAs). Her rapidly-improving 200 fly would have finished in the top 30. Merrell will join the Bulldogs’ class of 2022 with fellow verbal commits Dakota Luther, Madison Homovich, Olivia Carter, and Tatum Smith.

i am so truly honored&excited to announce my verbal commitment to UGA!!! GO DAWGS❤️???? pic.twitter.com/jyFREA8tlW

I can’t believe I’m saying this, but Georgia might have just passed Stanford. I would probably wait to see any other commitments as well as senior year improvements before stating that for sure, but Georgia is definitely close than I thought anyone could get.

Please see yourself out

I am sorry if my comment was not clear, but I was discussing the recruiting class, not the overall team. Georgia still has a ways to go to beat Stanford there.

Second year in a row they’ve snagged the #1 recruit. Strong butterfly class UGA has picked up.

Congratulations Eva and UGA! Great addition to the Dawg Legacy!