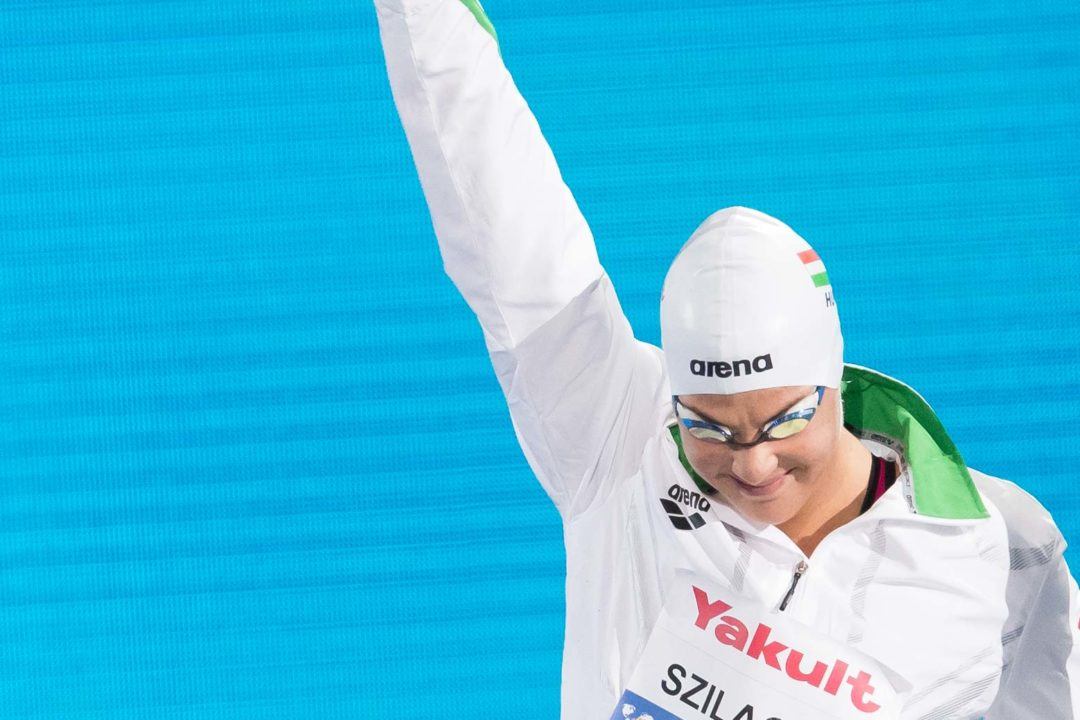 Double Youth Olympic Games champion Liliana Szilagyi will not swim for the University of Florida this season, a spokesperson has confirmed.... Archive photo via Mike Lewis/Ola Vista Photography

Double Youth Olympic Games champion Liliana Szilagyi will not swim for the University of Florida this season, a spokesperson has confirmed.

Szilagyi was originally committed to join the team in January of 2017, and after not appearing in a meet for the Gators last year, did initially appear on their 2017-2018 roster. Some time in the last month, however, her name disappeared from that roster, and we have confirmed that she won’t swim for the team this season. We’ve asked for clarification as to whether she might still join the team in future years, and the spokesperson said that she would get back to us with a response on that topic.

The 20-year old Sszilagyi, a Hungarian native, did spend time training in Florida, but earlier this week posted to her Instagram a photo with a caption that reads “Thank you Gators, thank you Florida❤️❤️ I will miss You ??? #alwaysand Keep up Guys, kick that ass?????????????????”.

That post and its replies imply that she has left the program for good and will instead head to Switzerland (though at some point she replies “not Switzerland yet.”) We’ve reached out to Szilagyi to confirm her future plans.

Szilagyi was the 2014 Youth Olympic Games champion in both the 100 and 200 fly, and a year prior was the silver medalist in the same events at the World Junior Championships. Her most recent senior medal came at the 2016 Eurpean Championships, where she was 2nd in the 200 fly, which was followed later that year by her 2nd Olympic appearance. She wound up 12th in the 100 fly and 10th in the 200 fly.

where would you put florida in the class rankings after her departure? just curious

2010 is 7 years ago……pretty much downhill from there. but men have been consistently top 5 or better

two years is consistent in your mind?

yep 19th and then not scoring is not a good trend.

So if they do bad for two years after doing good for 3 years they are consistently bad? This is next level stupidity

Some poor recruiting years that they are paying the price for now… But their girls swam well last year relative to their ability just no superstars as in years past….

If a Hungarian girl cannot stand the Gator workload then it is not likely many others will either .

Those other girls look happy too but they are not NCAA stars either .

Nice Try G.I.N.A… Had nothing to do with workload and judging by her Instagram post, appears that she loved it at Florida.

She actually got in really good shape and swam pretty well after training at Florida. She didn’t leave until before the summer Euros/Mare Nostrum circuit started. I think this has more to do with her wanting to concentrate on long course competition exclusively. I just hope Florida didn’t tie up scholarship money they could have had available to recruit other swimmers while she was making this decision.

Or maybe she had some Eligibility problems ?