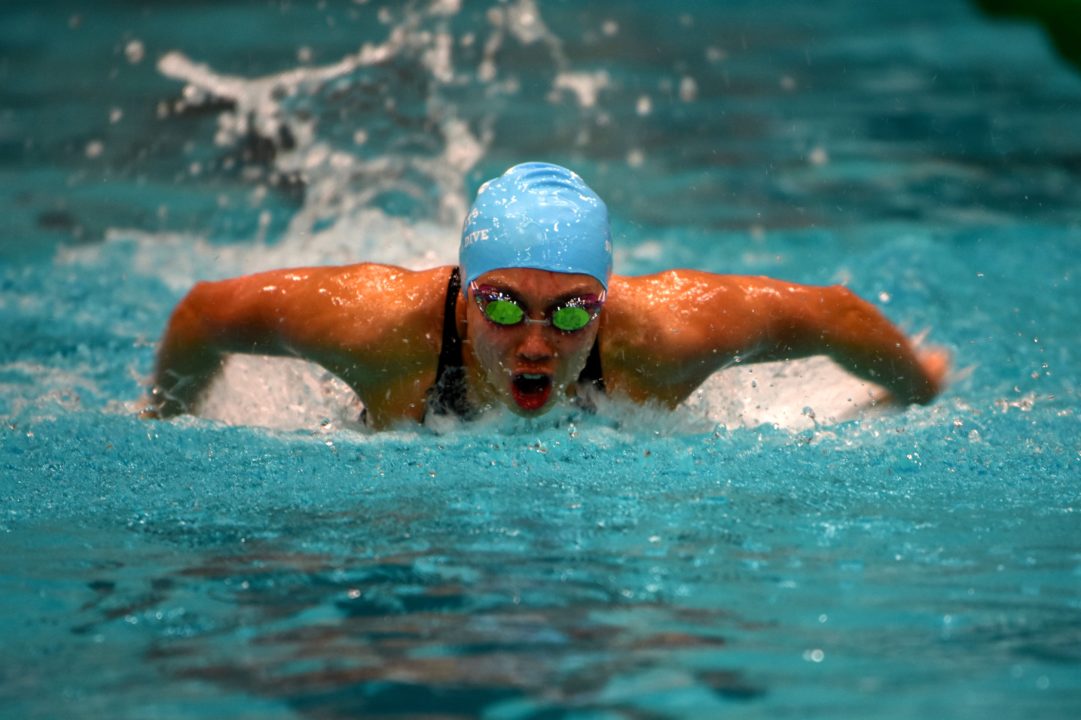 The VHSL Class 6 State meet was held this past week, seeing VHSL records, and even a pair of national high school records fall. Stock photo via Christine Burgeson

The VHSL Class 6 State meet was held this past week, seeing VHSL records, and even a pair of national high school records fall. The Yorktown girls pulled out the team win, coming in with a significant margin over Battlefield, while Ocean Lakes boys won a pretty tight finish with Woodson Cavaliers.

National HS records fell at the hands of Torri Huske. Huske, a Yorktown senior who already held the girls 100 fly national record, blew away her previous mark, swimming a 49.95 to break the 50-second mark for the first time in her career. Huske’s swim also makes her only the 2nd female swimmer to break 50 in the 100 fly before entering college. Huske had also swum a 1:53.73 to break the girls 200 IM National HS record. She got out to a brilliant start on that race, splitting a 23.51 on the fly 50. Huske was also electric on the relays, splitting 21.65 on the 200 free relay lead-off, and 48.04 leading off the 400 free relay. She would set the VHSL record in both the 50 free and 100 free with her relay lead-off splits.

Battlefield sophomore Camille Spink posted a VHSL overall record, winning the 100 free with a 48.93. The swim was a personal best for Spink, and brought the VHSL record under 49 seconds for the first time. Spinke only held the record for a short time however, as Huske would swim her 48.04 leading off the 400 free relay. Spink also won the 50 free with a 22.55, establishing another personal best.

James River senior Grace Sheble continued to be a force in the VHSL 100 breast, winning the event again with a 1:01.68. Sheble was actually in 2nd halfway through the race, splitting 29.34 on the first 50, while MCLN freshman Catherine Hughes was 29.04. Hughes went on to finish 2nd in 1:02.18. With Sheble graduating, it looks like Hughes will be the breaststroke favorite heading into next year.

Ellie Joyce, a Washington-Liberty sophomore shattered the VHSL 6A record in diving, accumulating a 478.95 points in the event.

Oakton senior Anthony Grimm was in excellent form this week, picking up another 2 individual VHSL titles to cap off his career, and providing a few more stellar relay performances. Grimm kicked off his meet with a blistering 20.87 lead-off on the 200 medley relay, establishing a new personal best. The swim was the fastest back split in the field by over 2 seconds. Grimm also provided a 19.24 anchor split on the 200 free relay, which you can watch below:

Yorktown freshman Nolan Dunkel popped off a big swim to win the 100 back. Dunkel clocked a 49.22, out-pacing the field on both 50s of the race. Dunkel also won the 100 fly, posting a 49.14, which was also a personal best. He won the 100 back by over half a second, and the 100 fly by over a second, marking Dunkel as a force to reckon with in those events for the next 3 years.

Team champion Ocean Lakes picked up a pair of event wins in the 200 IM, where sophomore Bobby DiNunzio swam a 1:52.39. DiNunzio was in a tight race through most of the race, but opened up a 26.58 split on the final 50, pulling himself away from the field as he charged into the finish. DiNunzio went on to win the 500 free with a 4:31.34, displaying the same closing speed he did on the 200 IM.

Since Huske went a 48.04 on the leadoff of the 100 free, do that and or her 50 leadoff count as state records (assuming the 50 was faster than the posted record)???

I would think definitely yes

Spink also split a 21.7 on the 200 free relay which is just dirty for a sophomore girl