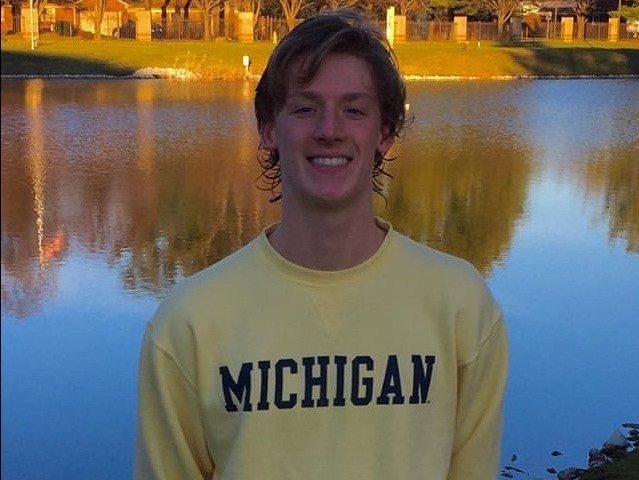 The Michigan Wolverines hosted the Michigan State Spartans for a men's dual on Friday, in what was potentially the final dual meet between the two programs. Stock photo via Petra Davis

The Michigan Wolverines hosted the Michigan State Spartans for a men’s dual on Friday, in what was potentially the final dual meet between the two programs. Michigan State is set to cut both the men’s and women’s swimming & diving programs after this season as things currently stand. Michigan came out on top tonight by a 137-77 decision. Michigan and Michigan State will have a women’s dual tomorrow (Saturday), along with Rutgers. Live results for tomorrow’s women’s meet will be available on MeetMobile.

Wyatt Davis picked up the 200 free with a 1:37.86, leading a massive group of Wolverines. Michigan had 10 swimmers in the race, but Davis was the only to swim for points, the rest raced exhibition. Jacob Mitchell was right behind Davis in 1:37.98, and Gus Borges swam a 1:38.19. Michigan State was led by veteran Aidan Farley, who clocked a 1:40.76. Davis also went on to tie for 1st in the 100 with teammate Donald Scott, both of whom swam 45.54. Farley led the Spartans again in that race, posting a 46.27.

Charles Morici won the 100 fly for Michigan in a tight race with a few swimmers. It was actually teammate Cam Peel who led the field with a 49.12, but he ultimately swam exhibition. Morici was just behind, posting a 49.38, while Spartan freshman Stephen Freitag clocked a 49.96. LeBuke also swam the race exhibition, finishing between Morici and Freitag with a 49.56.

ANN ARBOR, Mich. — The No. 9-ranked University of Michigan men’s swimming and diving team held a swimming meet at Canham Natatorium for the first time in nearly a calendar year on Friday (Jan. 22), winning all 13 events in a 137-77 win over Michigan State. The team scores will be updated following the conclusion of diving Saturday morning (Jan. 23).

Overshadowing the result was the realization that it was likely the final dual meet between the two in-state schools who have competed against each other for 100 years. Last fall, Michigan State made the decision to discontinue its swimming and diving program following this season. The U-M swimming coaches and members of the team donned “Save MSU Swim/Dive” facemasks, standing in solidarity with their opponents across the pool. The women’s teams will meet Saturday.

“We talked before the meet about how we could honor them,” said head coach Mike Bottom. “We want them as our competitor. We make each other better, there’s no question about it. The long rivalry we’ve had for 100 years is coming to an end, and the idea of not competing against Michigan State in the future is so sad.”

The Wolverines opened the meet with the 400-yard medley relay, swimming that event for the first time this year. The quartet of Eric Storms, Will Chan, Alex King and James LeBuke brought home the win in 3:15.67. Storms led off in 47.79, while LeBuke anchored in 44.17.

In the 200-yard freestyle, freshman Wyatt Davis outdueled freshman Jake Mitchell and senior Luiz Gustavo Borges over the final 50 yards, touching first in 1:37.86. Junior Jared Daigle trailed by a half-second with 50 yards to go in the 200-yard butterfly, but powered home, overtaking teammate Bence Szabados for the victory in 1:48.88.

Mitchell got the victory in the 200-yard backstroke, swimming past King and holding off a hard-charging Storms down the final 50 yards (1:49.22).

The foursome of Cam Peel, Szabados, Storms and LeBuke closed the meet with a win in the 200-yard freestyle relay (1:20.20).

The last and final dual meet of the season is scheduled for Saturday, Feb. 6, when Michigan welcomes rival Ohio State to Canham Natatorium. The start time is to be determined.

East Lansing, Mich. –Michigan State finally had an opportunity to get in the pool and compete, racing Michigan on Friday evening at Canham Pool in Ann Arbor. The men’s teams from the two institutions faced off on Friday, with the women’s teams and all diving competition slated for Saturday.   With a limited number of athletes competing on Friday, MSU trails by a score of 137-77.  Diving, which will be contested on Saturday, will finish out the competition.

“I’m really proud of our team.  Its been a really difficult couple of weeks.,” said head coach Matt Gianiodis.  “We came down here with mostly freshmen and sophomores, and we haven’t been able to train or work together as a team in a good while.  I thought the freshmen did a really nice job in their first meet.  For us to compete the way we did today – missing a lot of our upperclassmen and swimming against a top-10 Michigan team – I’m incredibly happy with our efforts.”

Sophomore Travis Nitkiewicz took second place for MSU in two events.  In the 100 breast, he posted a time of 57.06, edging out a pair of Wolverines who had designs on a podium finish.  His time of 2:00.16 gave him his second second-place finish of the day.

The women’s squad get their turn on Saturday, as will both men’s and women’s diving.  Action in Ann Arbor beings at 11 am.