The Mountaineers took a combined 17 of 18 events on day one of their tri meet with Xavier and Seton Hall. Stock photo via West Virginia Athletics 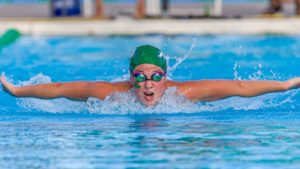 West Virginia won a combined 17 out of 18 events on the first day of the Big 12 vs Big East tri meet hosted by West Virginia. The only event the Mountaineers didn’t win was the women’s 1000 free, where Xavier’s Emma Kauffeld beat the rest of the field with a time of 10:30.40.

WVU’s Logan McHenry broke the school record in men’s 3 meter diving. McHenry’s winning score of 380.80 broke the previous record of 264.96, which was set in 2009 by Matt O’Neill. WVU’s diving coach, Michael Grapner, said of McHenry, “He is very deserving of this honor. His hard work has come full-circle since learning a 3-meter list starting in his freshman year, to now rising to the top and setting a new record. Logan came into the season looking to accomplish his goals and I look forward to what else he will accomplish this year”.

MORGANTOWN, W.Va. – Senior diver Logan McHenry set a new school record in the men’s 3-meter dive as the West Virginia University swimming and diving teams got off to a quick start against Big East Conference opponents Seton Hall and Xavier on Friday night at the WVU Natatorium.

In all, The Mountaineers combined to win 17 of 18 total events on the first day of the two-day competition, jumping out to an early lead over the Pirates and Musketeers.

“It was a very impressive night,” WVU coach Vic Riggs said. “It started with both of our 400 medley relays just missing pool records, and they were significantly faster than they were three weeks ago. There were many quality swims tonight, highlighted by Morgan Bullock, Morgan Carr and David Dixon, who all just missed pool records in the 200 fly. In every event we had multiple swims that were either best times or in-season best times. The team’s energy and focus were very good tonight and we’ll need to bring that again tomorrow to duplicate and improve on this season.”

Friday’s action began on the springboard, where the Mountaineers dominated for the second consecutive meet. Senior Michael Proietto won the men’s 1-meter, earning a score of 365.25, while junior Austin Smith earned his NCAA Zone-qualifying score of 313.10 to finished second. McHenry (312.25) took third.

Later on, McHenry had his big moment on the 3-meter. The Ventnor City, New Jersey, native’s school-record score won the event, while freshman Jacob Cardinal Tremblay placed second in 343.40. In all, the Mountaineers secured the first five finishes.

“We’re very proud of Logan,” WVU diving coach Michael Grapner said. “He is very deserving of this honor. His hard work has come full-circle since learning a 3-meter list starting in his freshman year, to now rising to the top and setting a new record. Logan came into the season looking to accomplish his goals and I look forward to what else he will accomplish this year.”

Swimming events began with the women’s 400 medley relay, as the WVU team comprised of Currat, Harris, Bullock and freshman Sofia Bernard earned the Mountaineers’ first victory in the pool of the night. The group combined to register a time of 3:47.94 to take the event. The WVU team of junior Maggie Miller, sophomores Julia Miranda and Julia Niltonand freshman Olivia Heflin placed second in a time of 3:49.36.

For the men, DiSibio, El Merini, junior Drew Damich and freshman David Dixon won in a time of 3:20.30. The Mountaineers also claimed second place in the event, with junior Jake Armstrong, sophomore Sam Neaveill and freshmen Angelo Russo and Max Gustafson earning a time of 3:23.32.

In the 1,000 free, sophomore Trayton Saladin touched the wall first for the men, recording a time of 9:27.67, ahead WVU senior James Koval (9:36.68), who finished in second. Freshman Luisa Winkler led the way for the Mountaineer women, placing second in the event in a time of 10:34.61.

Currat added to her win total in the women’s 100 backstroke moments later. The Dunkerque, France, native finished in a first-place time of 56.46. Freshman Ally VanNetta was finished third, touching the wall in 57.17.

Then, Russo kept WVU’s winning ways going in the men’s event, finishing first in 49.97. Sophomore Luke Hene was third in 51.81, while sophomore Austin Hartke (52.03) was fourth.

The Mountaineers conclude the tri-meet with Seton Hall and Xavier on Saturday, Oct. 28, at 10 a.m. ET, at the WVU Natatorium. Admission is free for all fans. Parking is available in the lots surrounding the WVU Coliseum and WVU Natatorium.

Additionally, representatives from the WVU Medicine Cancer Institute will be collecting donations for its pink shirts benefiting its breast cancer program during the meet.