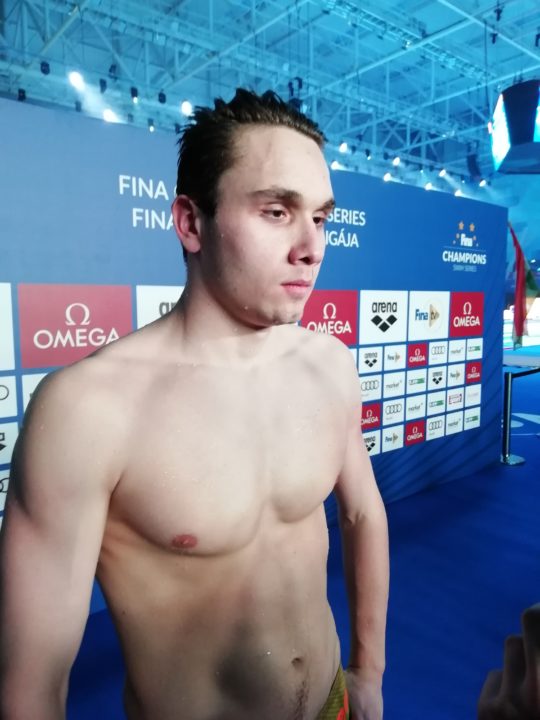 Kristof Milak is mature beyond his 20 years, focusing on following up on his 2019 World Championship title and World Record this summer in Tokyo. Archive photo via Adrian Mancebo

The teen had been on the rise for some time, setting the World Junior Record at 1:52.71 in 2018. But the fact he beat the fastest ever in the event, by well over half a second to boot, was really quite spectacular.

Now a 20-year-old, Olympic gold is on Milak’s mind, with the Hungarian wanting to follow-up his breakthrough performance with that coveted shiny medal this summer in Tokyo.

While at a training camp in Thailand, Milak spoke with news outlet Index on what he’s been doing to prepare for this summer’s highly-anticipated Olympics. The fly specialist who also can throw down solid freestyle and backstroke performances has typically trained on his own but has been mixing it up with Bence Biczo and Richard Marton.

“[Training alone] had its advantages,” Milak said. “I was concentrating only on myself. But swimming in a team also has its advantages and I am happy that I can swim with them. I like it that way; they do not let me relax, as we’re competitive.”

Also among the subjects of conversation are who Milak has his eye on in terms of competition for the 200 fly, including Japan’s on-fire Daiya Seto. “Seto has swum a time of 1:52.53 in January; no one had done a time like that this early in the season before.”

“Gianluca is even younger than I am and will put on a show this year.”

“World Records are so precious because they are so hard to do again. If we were at home, I’d be training next to Katinka [Hosszu] and see how hard she has to work to stay on top.

“My other hero, Michael Phelps, needed 3 years to get to a new personal best. After 2003, he was only chasing himself until 2006.”

The man reveals how he is hoping to shave tenths of seconds off of his time by focusing on the mechanics of his turns. “I can save time on my turns and start. I still have room for improvement.

“I do not have issues with reaching the wall and getting back to speed or dolphin kicks, but no one taught me how to turn properly. Strange to say it after a World Record, but I still have the feeling I sometimes die at the turns.”

Other events besides the 200m fly are under consideration for the talented Milak, although he says that he is keeping it a secret for now and, when the time is right, ‘everyone will know.’

In the meantime, as well as dealing with pressure in the pool, Milak is contending with a type of fame he had never experienced. “I feel like my life has been changed. I have been invited to events I never would have been invited to before. I see myself on posters and this is really an unusual feeling.

“This is why I really need to be smart now.”

You can read the interview in its entirety, in Hungarian, here.

He can definitely get silver in 100 especially if he’s next to Dressel and can drag off of him. Dude went 50.6 at 17

World championships have been a 17 year old settling for silver behind Dressel in the 100 fly. Who’s gonna take it in 2021?

no way he does both 400s. they’re in the same session. wouldn’t call minakov a lock for silver, as his place in the olympics is up in the air because of the russian ban. regardless, milak went 50.6 and 1:53.7 at 17, then focused solely on the 200 and smashed the wr, and is now back to training for multiple events. i wouldn’t be surprised if he breaks 50 this year, especially if he improves his starts and turns

I meant: one of those.

Any word on how Urlando’s recovery is going?

Hoping Luca recovers quick he is such a great kid with a bright future and has many who look up to him. Love the things he’s done and what he is bound to accomplish.

As for Phelps not improving for 3 years, I feel like that had to do with his focus on backstroke and freestyle for his 400 IM