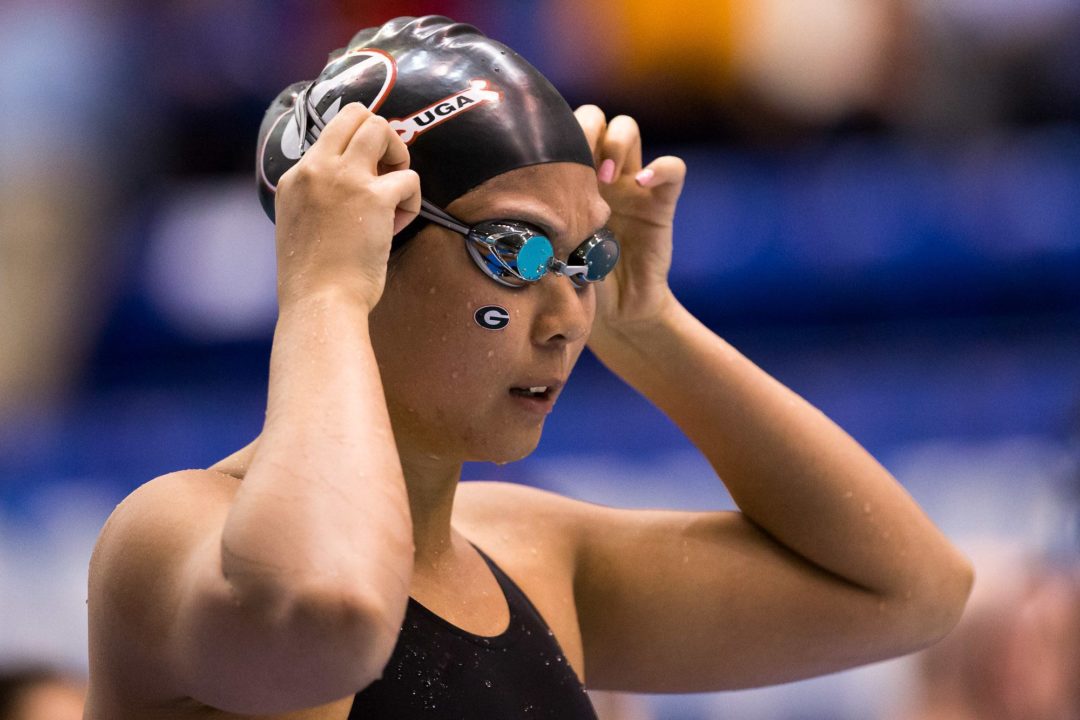 Annie Zhu won a swim-off to make the A final of the 200 IM, one of 8 Georgia swimmers to make a championship heat on day 1. Archive photo via Tim Binning/TheSwimPictures.com

One session into the 2015 NCAA Championships and the defending champs are already making a run. Georgia blasted through the first session, earning 13 scoring swims including A final slots in both relays and 4 swimmers in the A final in the 500 free.

It’s not a huge surprise that Georgia made a run – the 500 free is one of the cornerstone events with this roster and the 50 free corps are no slouches either – but it’s a good sign for the ‘Dawgs’ title hopes with a lot of ground make up on Cal based on seed times.

Probably the most pleasant surprise for Georgia was the 200 IM, where 3 women will score when not a single Bulldog entered the meet seeded in the top 16. That includes a championship final appearance from Annie Zhu, who had to win a swim-off for 8th place and is now guaranteed at least 11 points.

Georgia’s success is no reason for Cal to hit the panic button, though. The Bears have 9 scoring swims set up, including dual A final slots in the relay races. That’s headed by a 1-2-3 punch in the 200 IM, a momentum boost that would be very hard for any other teams to match if Missy Franklin, Liz Pelton and Celina Li can hang onto their prelims spots.

The third team in the projected three-headed monster of title contenders is hurting some for swims though. Stanford has just a single individual coming back for finals, and that’s Simone Manuel in the 50 free, who was all but guaranteed a lane in finals. The Cardinal relays should be made up almost entirely of fresh swimmers, and they’ll need those relays to place high to stay in the hunt with Cal and Georgia.

The other two teams really worth noting are Virginia and Louisville, each of which has two A finalists individually. Virginia has new NCAA 500 free record-holder Leah Smith leading the way, and Louisville is getting huge production from Kelsi Worrell, who made the 50 free A final and blasted two incredible relay splits this morning (21.04 on the 200 free relay and 49.56 swimming fly on the second-ranked 400 medley relay).

Note: these totals do not include 1-meter diving.

Relay events list the A or B final, while individual events track the number of swimmers up followed by the number down (Up/Down).

Hello Jared…isn’t Louisville in the 200 F.R. A final? Just checking….thx

Very interesting! I am surprised to find out that I am not the only one nerdy enough to sit and score out the meets from the psyche sheets (with the exception of coaches). It is important to remember, the psyche sheets and talking heads can say as much as they want, but it comes down to a real gut check!