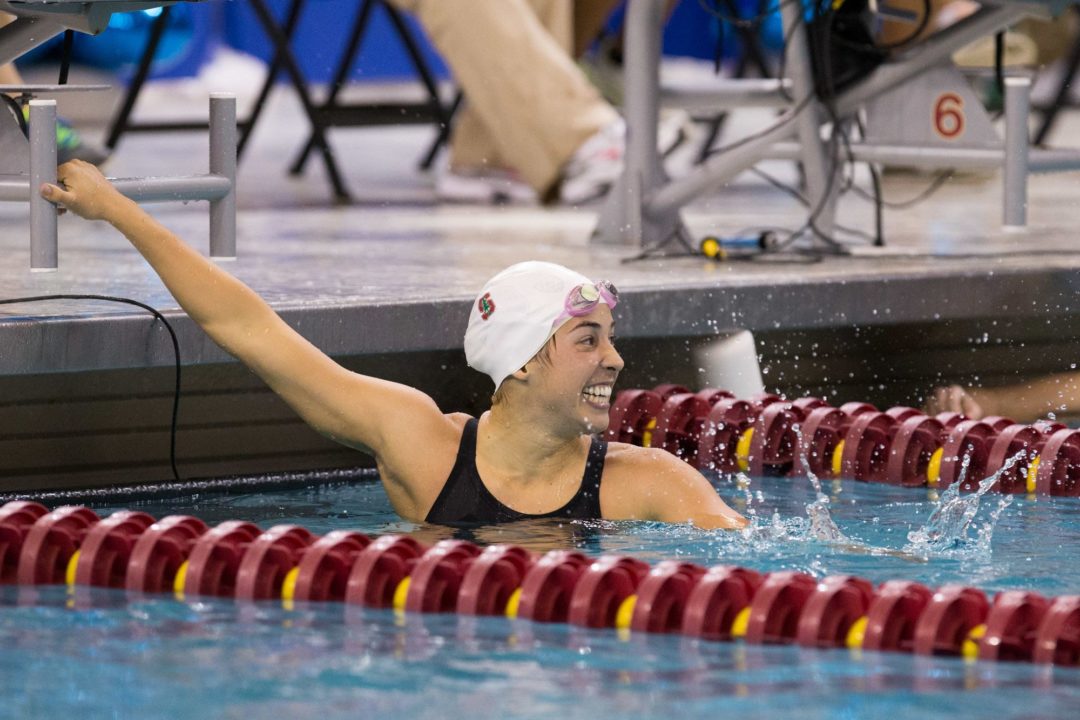 Maya DiRado is our top pick for the women's 200 IM at 2014 Nationals. Archive photo via Tim Binning/TheSwimPictures.com

Margalis rose to the top of the national list of 200 IMers at the Bulldog Invite this past July 10-13. She dropped 1.5 seconds off her lifetime best, dating from 2012 long course season, and 2.5 off her top time from 2013. Margalis finished third at World Championship Trials last summer, a mere .13 seconds behind second-place Elizabeth Beisel. Margalis made the same strides in short course this year, dropping two seconds at NCAAs over her best 2013 time (when she set the meet record at SECs). It’s interesting to note that, although her strongest weapon is breaststroke, she has improved fairly evenly among the four strokes, dropping about a half-second off each. Margalis has had enough of second-place finishes and will really be gunning for the win this time around.

Hoff took two years off from competing (she’s still only 25) and is making quite a comeback this summer, and she’s really an exciting prospect – she’s going to bring the buzz to this event. In 2012 her best time was 2:12.9; so far in 2014 she has been under that three times untapered. Her 2:12.05 season best dates from mid-June, in a final where the second-fastest swimmer trailed her by 8.7 seconds. Interestingly, Hoff has been under 2:00 six times in the 200 free this year, too. She seems to be enjoying swimming again, and when Katie Hoff is on, there aren’t many people who can beat her. It will be interesting to see what she does with her taper.

DiRado just seems to be getting stronger and stronger. She doesn’t have any weaknesses and closes really well. The 2:12.30 comes from the Los Angeles Invitational over the weekend of July 17-20 where she just edged out Leverenz for the win (you can watch the race video here), and is only .04 off her best time from 2012 Olympic Trials. DiRado and her Stanford teammates –and Leverenz and her Cal teammates, for that matter– used this meet as a tune-up for Nationals. They’ll spend the next two weeks working the kinks out and then we’ll get to see them at their best. We really like DiRado in the 200 distance; she is so strong in the long axis strokes and really works the finish. As long as she doesn’t lose too much ground to Leverenz, and Hoff for that matter, on the breast, we think she she’ll get her hand to the wall first.

With a 2:10.13, Leverenz was the fastest American 200 IMer in long course meters by almost a full second last summer with her fifth-place finish at World Championships. She is currently the SCY American record-holder in this event. Leverenz has gone 2:12-mid twice so far this season but her personal best is 2:08.95 from the 2012 Olympic Games in London. (That time is the world’s eighth-fastest ever.) Leverenz is a great athlete and just may prove us wrong, but she is our second pick for this year’s 200 IM. While she is quite strong in the short axis strokes, with only a 50 of each stroke she doesn’t have as much time to build an advantage in the breast as she does in the 400 IM. We see her right at DiRado’s shoulder but we’re giving the edge to DiRado in the 200 distance.

Baker has already gone a lifetime best this season; her 2:13.17 is .18 faster than her third-place finish at US Open last summer. Although Baker lost to Ella Eastin in the 200 IM at FINA Junior World Championships in Dubai, she finished the 2013 season with a faster 200 IM by 3/10. This year she owns the top 18-and-under time in the country, three seconds ahead of Katie Ledecky, Becca Mann, and Eastin (just to name a few). What remains to be seen is how much more she has in her.

Elizabeth Pelton is not one to be counted out. Owner of the 21st-fastest time long course in history, 2:10.02 from Winter Nationals in 2011, Pelton is a contender. She has had more success in short course, however, where she was ranked third this past season and tied for first with Leverenz in the 2012-13 season. Pelton is arguably the strongest backstroker in the group; if she doesn’t lose ground in the breast she could challenge DiRado and Leverenz for the title.

Celina Li is always right up there among the top eight in the 200 IM, both short course and long course. She finished this past short course season ranked 3rd in the US after a very successful NCAAs. Last summer she finished fourth at World Championship Trials in June and then second at the US Open in August. If you look at her history, she tends to hold 16s through the lead-up to her championship meet, then swims 12s when it counts. So far this year she’s on schedule to repeat; her time from Los Angeles Invitational was 2:16.0.

Elizabeth Beisel’s personal best comes from the preliminary heats at 2013 World Championships, where she dropped a 2:11.16 in her first swim. That was a full second under her silver medal finish at World Championship Trials in June. The Bluefish and Gator Swim Club’s Beisel is perfectly capable of beating this field of women. She finished 2013 with the third-fastest long course time; in short course she is always ranked in the top five. Last summer at World Championship Trials she finished second to Leverenz, earning the chance to compete in the 200 IM in Barcelona. Beisel could be the one to throw this whole ranking off.

SwimMAC’s Emma Reaney had a breakthrough year, setting the American, US Open, and NCAA records in the 200 breast while swimming for Notre Dame at NCAAs in March. She clocked the 21st-fastest short-course 200 IM time in history during prelims at NCAAs. Reaney had a great finish to her 2013 summer with a fourth-place finish, and best time of 2:14.01, at the US Open in August.

Karlee Bispo, of Palo Alto Stanford Aquatics, currently sits in the world’s top 50 with her 2:13.64 from the Speedo Grand Challenge in Irvine. That’s the sixth fastest American time so far this year; Bispo also finished last long course season in the sixth position. While Bispo hasn’t been quite as successful in short course, she may be poised for a great 2014.

Felicia Lee of Stanford Swimming may be a long shot to win the 200 IM but she’s almost always there in the final pushing the field. Lee’s first half is among the strongest in this group of women –she is a standout butterflier and backstroker– but she tends to get overtaken in the breast. If she can bring her back half up a notch she will give this entire group a run for its money.

Eastin of SOCAL Aquatics won the 200 and 400 IMs at 2013 Junior Nationals, setting a meet record in the latter. She then went on to compete in the Junior World Championships where she also won the 400 IM with a world junior record. Eastin holds the national independent school record in the 200 yard IM with 1:55.15. Although she is stronger in the 400, Eastin could be a game-changer in the 200 if she hits her taper right.

My picks, along with each swimmer’s lifetime best:

Beisel is in Florida.. Also, I would rank her either 3rd or 4th she did great at Santa Clara

I would rank Margalis and Baker much higher. It should be a great race.

has quickly emerged into one of the strongest events for the US. No one star right now but a lot of top end depth