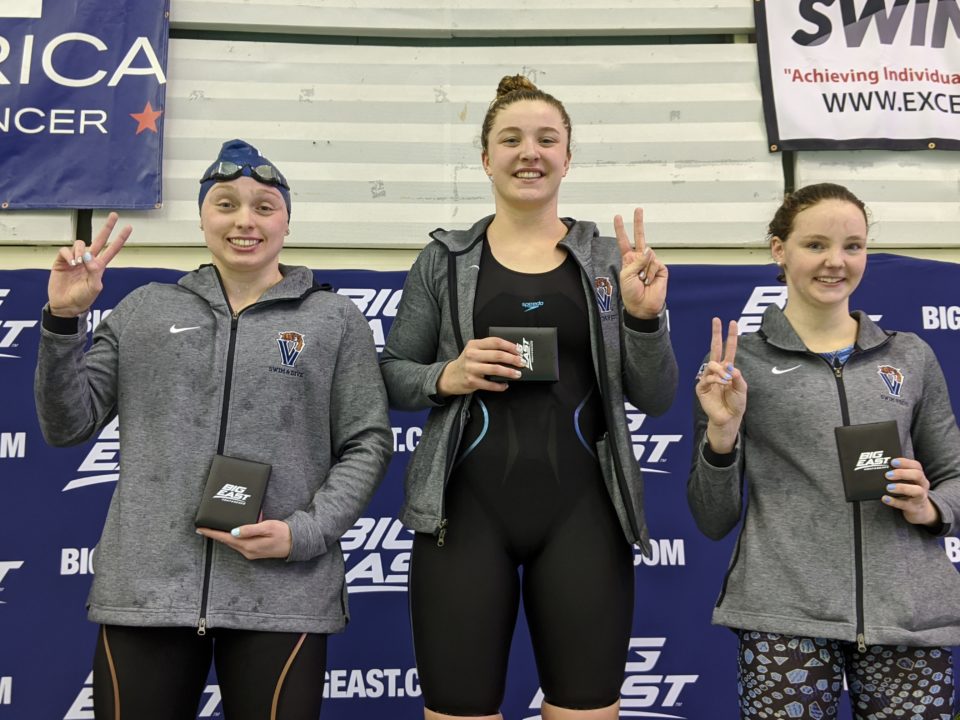 The Villanova women swept the 100 breaststroke on Friday night as the Wildcats holds a 61-point advantage heading into the final day of competition. Current photo via Gerry Dunn

After the second day of competition, the Villanova women launched themselves to the top of the leaderboard with three top finishes.

Between those finishes and good depth, Villanova earned 330 points giving them a significant lead over the competition. Georgetown is now in second place with 266 points, followed by Xavier in third with 201 and Seton Hall in fourth with 172. Providence (106) and Butler (105) are fighting it out for fifth and sixth.

For the men, the Villanova Wildcats and Xavier Musketeers came into the day tied for first with 246 points. Closely behind was Seton Hall with 237, Georgetown with 234 and Providence with 112.

All championship action will air live on the BIG EAST Digital Network and live-streamed on YouTube.

Kelly Montesi from Villanova took the lead at the backstroke leg and never looked back. She extended her lead throughout the race and finished first with a time of 4:18.19. Her teammate Kaitlin Gravell followed her to the wall for second with a time of 4:21.39. Georgetown’s Phoebe Slaughter finished third for the Hoyas with a time of 4:23.83.

On the men’s side, senior Justin Cucchi was a man on a mission. After leading the preliminary round with a time of 3:55.06, he shaved over 4 seconds off his prelim time to take gold with 3:50.91 to set a new Villanova record. Following in second was Georgetown’s Brett Sherman with a time of 3:52.01 and Justin Viotto of Providence with 3:55.77.

It was a tight race between the top three contestants. In the end, senior Wildcat Micaela Grassi stepped on the gas and out-touched the field. Her time of 54.87 won her the gold. Sierra Cripps of Seton Hall was second with a time of 55.06 followed by Butler’s Hannah Pugh in 55.31.

The men’s event was a whitewater sprint with Seton Hall’s Liam Cosgrove touching first with a time of 47.80. Xavier took the second and third spots with Charles Clark (48.47) out-touching Brandon Abboud by two-tenths (48.67).

Millicent Routledge of Villanova led this race from start to finish. She earned Villanova the gold with a time of 1:47.05 and a NCAA “B” cut. Emily Conners of Xavier took second with 1:49.98 and Abigail Garner took third with 1:53.30.

It was a sweep for the Lady Wildcats in the finals. Margaret Kleinsmith touched for Gold at 1:03.11, followed by teammate Rayann Jaryszak with 1:03.37 and freshman Perri Stahl in 1:04.39. This young trio will be tough competition for the next few years.

In a loud and exciting race – Josh Tosoni of the Seton Hall Pirates is the new Big East Champion with a time of 53.96. He was closely followed by Connor Morikawa (54.51) and fellow Hoya Nathan Goldfarb (55.60)

In one of the more exciting races of the night – Georgetown’s Enlin Chen pulled ahead to touch the wall first with a time of 55.85. In quick succession, freshman Brooke Rowe of Xavier touched for second (55.92) and Sally Alrutz from Providence took third (56.01).

Andrew Carbone of Georgetown earned an NCAA “B” qualifying time – and a gold medal – with a time of 47.18. In was a battle for second between Andrew Kelly of Villanova and Alexander Sironen of Xavier. Kelly out-touched Sironen with a time of 48.59. Sironen quickly followed for bronze with a time of 48.77.

Riley Fujioka continued to put on a show in the Three-Meter Diving finals. She carried a 38.5 point lead into the competition – and continued to excel. She did not miss a dive all night. Her score of 574.65 earned her the gold.

Georgetown’s Elizabeth Miller and Villanova’s Bridie Dunn traded places three times during the Finals. It came down to the last dive with Bridie Dunn of Villanova regaining the lead for second place with a score of 527.20. Senior Elizabeth Miller from Georgetown ended the night with 519.25 points and bronze.

The Villanova women led from start to finish in this race. The team of Montesi, Jaryszak, Grassi and Stahl took the gold with a time of 3:43.29. They were followed by Xavier (3:26.38) with the silver and Georgetown (3:47.91). Seton Hall, Providence and Butler took fourth, fifth and sixth.

In the men’s final, Georgetown University took the gold with a time of 3:13.71. The team of Carbone, Morikawa, Michael Baldini, and Sean Devlin are the new BIG EAST Champions. Seton Hall (3:14.85) took second and Xavier (317.40) earned the bronze medal. Villanova and Providence took fourth and fifth respectively.

On the final day of the BIG EAST SWIMMING & DIVING CHAMPIONSHIPS – preliminary events will start at 10 am. Men’s One-Meter Diving will start at Noon with warm-ups starting at 11.

The Senior Recognition Ceremony will start at 5:30 p.m. to celebrate all of our senior swimmers and divers. There will be a parade of Senior athletes introduced by team – and recognizing each for their contributions to the team, personal accomplishments and future plans.

Finals will begin at 6 p.m., starting with the 1650 yard freestyle event. Due to the length of the swim – there will not be a consolation final.

Gerry Dunn is a contributing writer for SwimSwam. He is a “Diving Dad” and resides in Washington, D.C. Gerry continues to dive competitively and currently serves on the USA DIVING Board of Directors. He is also the Chairman of US Masters Diving. Would you like to share your thoughts? E-mail Gerry at [email protected].