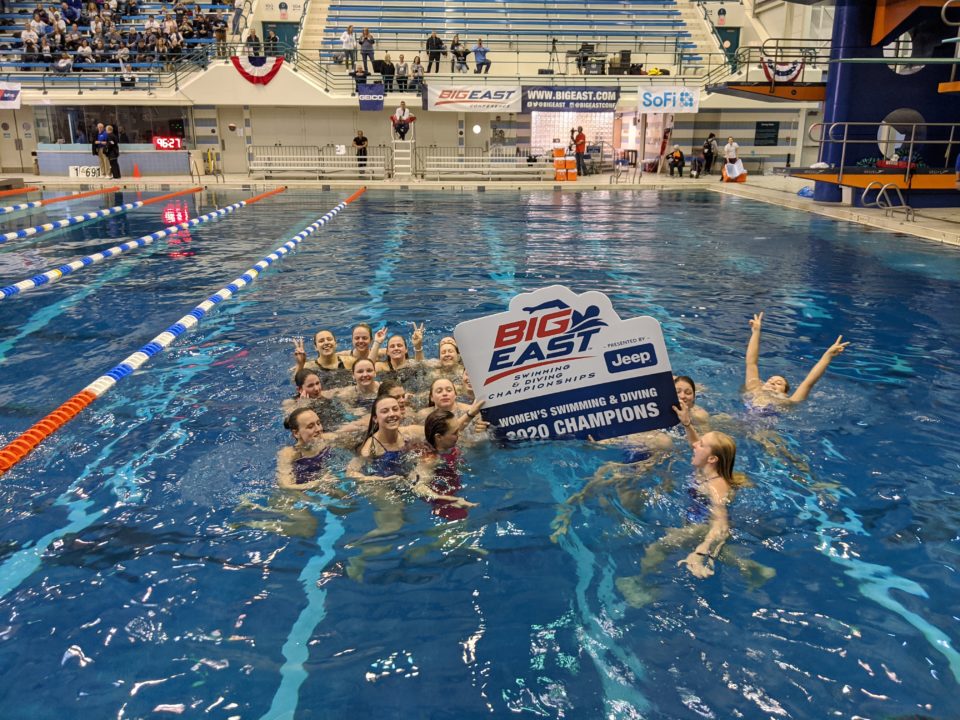 Villanova sophomore Millicent Routledge was honored as the Most Outstanding Women’s Swimmer of the meet after winning the 50 free, 100 free and 200 free. Georgetown’s Drew Carbone is a three-time winner of Most Outstanding Male Swimmer after earning three individual gold medals and a new BIG EAST record in the 200 backstroke.

Rounding out individual awards, Georgetown’s Marc VanDyken was awarded Women’s Diving Coach of the Year and Villanova’s Todd Michael earned the award for the men’s side for the third year in a row.

Villanova Freshman Brenna McLaughlin made her mark in the mile swim in some very fast company. Her time of 16:47.23 was nine seconds faster than Georgetown freshman Corey Moon (16:56.49). The balance of the podium was taken up with Villanova swimmers. Anna Turner took third (17:00.48) followed by Emily Provenzo, Nicole Welsh and Andrea Fong.

Villanova Sophomore Kelly Montesi led the race from start to finish. She took gold with a time of 1:58.00. Georgetown’s Pheobe Slaughter and Villanova’s Gracie Wielar fought for the second spot with Slaughter (2:01.22) out-touching Wieler (2:01.37) for second.

Georgetown’s Carbone defended his 200 backstroke title for the third time in 1:42.11, which was both an NCAA ‘B’ cut as well as a new BIG EAST record. The original record was set in 2012 by Pedro Oliveira. Villanova’s Justin Cucchi was second in 1:44.61 also with an NCAA B qualifying time, and in third was Ross Pantano of Seton Hall in at 1:46.91.

Routledge sprinted to a first-place finish with a time of 49.78. Emily Connors of Xavier was just behind in 50.40, followed by Georgetown’s Belinda Donohoe (50.78).

Villanova freshman Kaitlin Gravell led from start to finish. Her time of 2:18.53 was good as gold – and her fellow Wildcat Margaret Kleinsmith followed with a time of 2:20.03 for second. Georgetown’s Alexandra Rieker rounded out the top three for bronze with a time of 2:20.

Josh Tosoni of Seton Hall won a close-fought race with an NCAA ‘B’ qualifying time of 1:57.90. Freshman Connor Morikawa of Georgetown also finished with an NCAA ‘B’ time and took the silver in 1:58.20. Freshman Jonathan Bernard from Xavier posted a 2:00.30 for the bronze.

Taylor Hogan of Xavier took the gold medal in the closely contested race. She touched the wall at 2:02.13 ahead of Villanova senior Taryn Els (2:02.63). Seton Hall freshman Sierra Cripps took third place with a time of 2:02.67.

For the men, Xavier senior Charles Clark reached the wall in a time of 1:48.30 for the gold. Closely following was fellow Muskateer Brandon Abboud. Rounding out the top three was Joseph Gibson of Seton Hall with a time of 1:49.27.

Senior Michael Perra of Villanova swept the men’s diving events with a victory on the 1-meter springboard. Perra scored 579.00 points to secure the win and his fourth Big East title on 1-meter.  Villanova sophomore Michael Ackert came from behind on the last dive to take second with a score of 511.40. Joseph Hoffman of Georgetown was less than a point behind to take third (511.25)

The Xavier and Villanova women tied atop the podium in the 400 free relay. Photo: Gerry Dunn.

The most exciting event of the day was the women’s 400 free relay. Villanova and Xavier exchanged the lead and on the last 25 yards touched the wall together for a tie. For the Wildcats, Montesi, Abbey Berloco, Wielar and Routledge touched the wall together with Xavier in 3:21.62. The Xavier team was led by Emily Saugstad, Abigail Gardner, Erin Merke and anchored by the senior Connors. It was a wonderful finish to a very competitive championship. Georgetown rounded out the top three for the bronze in 3:26.13. Seton Hall (3:28.06), Providence College (3:28.20) and Butler (3:29.36) took fourth, fifth and sixth respectfully.

Gerry Dunn is a contributing writer for SwimSwam. He is a “Diving Dad” and resides in Washington, D.C. Gerry continues to dive competitively and currently serves on the USA DIVING Board of Directors. He is also the Chairman of US Masters Diving. Would you like to share your thoughts? E-mail Gerry at [email protected].

Watch out for UConn next year