Why the Commonwealth Games are Good for Swimming 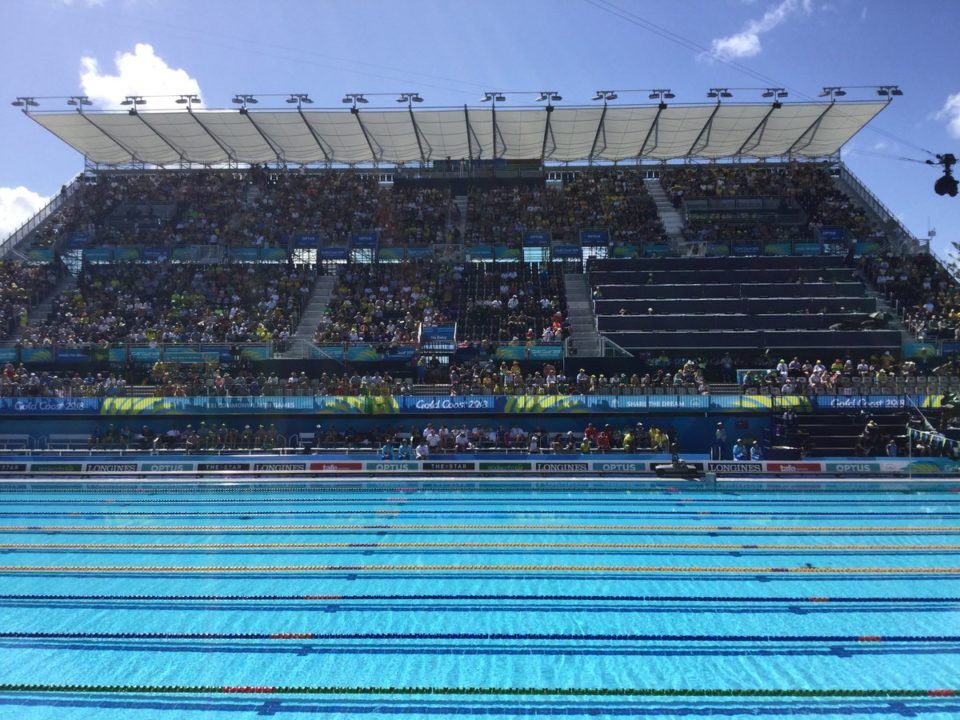 The debate about the residual value of the Commonwealth Games as the Queen, the head of the Commonwealth, ages has grown louder than ever in 2018. Some want so-called “minnow” countries to be culled from competition, citing lopsided results (3 Australian teams won by a combined 155 points on Friday across men’s and women’s basketball and netball). Others cite the murky and often violent history of the British Colonial rule. Those in favor of the event cite its ability to unite the members of the Commonwealth in a more positive air, promoting camaraderie among citizens, building better international bonds, and allowing the countries’ athletes to compete on more even footing.

The debate over the politics of the matter is of less concern to me than the debate over whether it is good for swimming. Several of our commenters have expressed frustration with the event, asking ‘what does it count for?” and rolling their eyes over Australians swimming fast, presuming that it will preclude them from speed later this summer at the Pan Pac Championships.

For example, Scotland is sending 29 athletes to the 2018 Commonwealth Games. Many of those athletes will never break through and qualify for the broader British roster for the European Championships, World Championships or Olympic Games. The same goes for England’s roster of 39, or Wales’ roster off 15. The subdivision of the teams, and the ensuing national financial support for those athletes, provides an incentive to continue training as they get older. We don’t necessarily know which of those next-tier of athletes will or won’t qualify for bigger stages, but the Commonwealth Games can motivate them to continue fighting for those national roster spots. The rise in Scottish swimming is good evidence of that in action – Scotland’s success at the Commonwealth Games has helped the country grow into a bigger portion of the overall British team.

Fans like resumes with medals – and the broader populace is less-discerning about the nature of those medals than some of the more in-tune swim geeks might be. Giving money back to the athletes is good for swimming.

And finally, the Commonwealth Games create a significant investment in swimming facilities from outside of the sport. The Tollcross Swimming Center underwent a nearly-$20 million (£13.8 million) upgrade ahead of the 2014 Commonwealth Games. Australia’s Optus Aquatic Centre received about $42 million in upgrades before hosting this year’s events – and that’s spent on an outdoor pool, where $42 million goes a lot further than an indoor pool. There’s a laundry list of ‘crown jewel’ facilities around the Commonwealth that were either built for, or renovated for, the Commonwealth Games, and they were built with money that would’ve been hard to find otherwise.

This money could all surely be put to other good in the communities, to some charities or some social programs that would help far more people (though the Commonwealth Games do result in a lot of employment, even if much if it is temporary). We’re not ignoring the broader social impacts of the Commonwealth Games, both positive and negative, in a discussion of whether the event should continue to exist. However, viewed in the narrow lens of “what is good for swimming,” there’s a whole lot for this event to hang its hat on.

Excellent article! I concur wholeheartedly – the commonwealth games are good for swimming, there’s no ifs or buts about it.

For further evidence to support this point (if indeed one needs it), see #2 and #1: https://swimswam.com/swimmings-toptentweets-the-future-of-swim-fandom/ 🙂

It is a “Games” experience with all the pomp and ceremony. Competing alongside and cohabiting with other sports. National pride is at stake and home and international media are present. This, World University Games and Pan-Am Games offer a glimpse of the real world distractions and environment of the Olympics. Pan Pacs doesn’t nor does the World Championships. Nobody cares about those meets but other swimmers. World Championships no doubt provides superior competition but these types of meets help prepare young swimmers for the Olympics in ways World Championships
cannot.

Ummm just because they are good for swimming doesn’t mean winning a metal there matters that much. I doubt anyone thought it was bad for swimming. I wonder consider just about as important as a National Championship not a massive international competition that it’s presented as. It’s just how I see it. Or I might just be salty cause all the men are swimming slow and Caeleb wasn’t invited.

u wasted a lot of energy …to gain what ? nothing except down votes . Time to travel outside of Usa mate , it would do u a great service to start understanding others .

I was just expressing my opinion. And I’ve been out of the country plenty of times. Hawaii is my favorite place to visit.

Hawaii is in the USA….

your opinion is based on what u think – not real experience of how other nations of swimming perceive what’s valuable for them – so again , Hawaï has nothing to do with CWG , so what your point ?

You need to listen more carefully to the speeches at the Olympic opening ceremonies and the words of Pierre de Coubertin; it’s not the winning that counts but the taking part. The Commonwealth Games isn’t claiming to be anything it is not. No Aussies are going up to Americans and waving their medals in their faces. Ultimately, I’m afraid it wasn’t designed for the satisfaction of none-commonwealth countries or for them to turn their noses up at how low the standards are compared to other competitions. It must be great to swim as fast as Caeleb Dressel, but if everyone swam like him, he wouldn’t be famous. It must be great to be able to look at things from an… Read more »

Yep it wouldn’t be worth his time.

How many Commenwealth games medals have you won? Or world medals?

Can’t win any cause I’m not part of the commonwealth.

Oh no going to have to change my username after this?