Whittle, Bell, Mildred & Downham Among Teens Who Did Damage At East Midlands 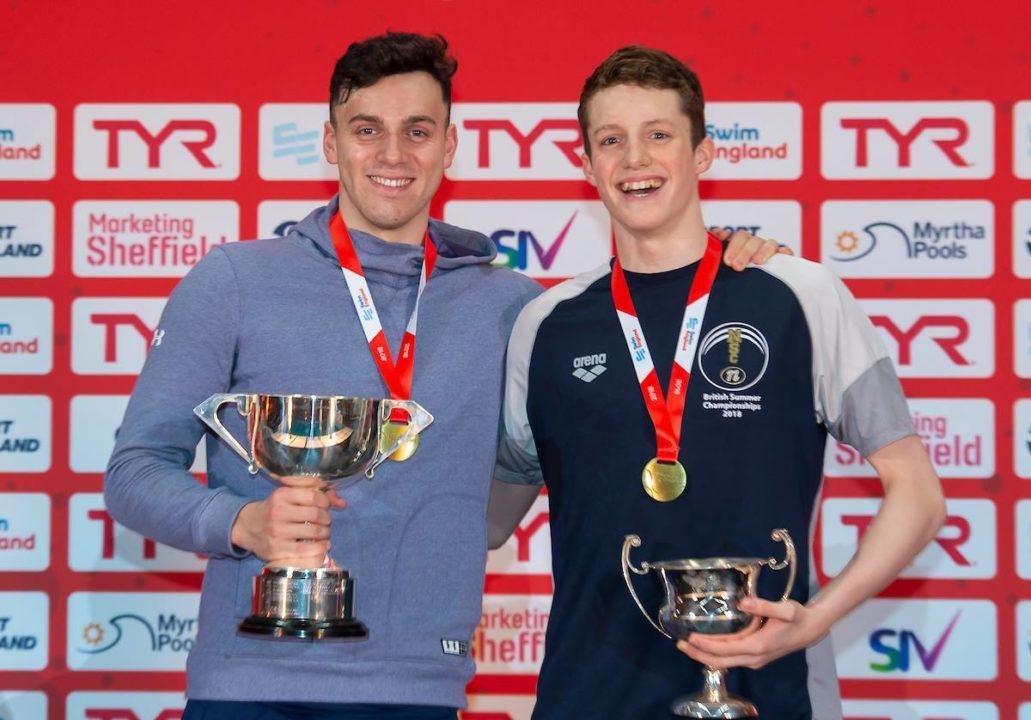 Edward Mildred (right) put up some impressive times to collect multiple golds at the East Midlands Regional Championships over the weekend. Archive photo via SWpix/Swim England

The 3rd and final meet within the trio of East Midland Regional Championships wrapped up yesterday at Ponds Forge, with the region’s emerging and elite talent putting down some solid swims on their home turf. We reported on how 14-year-old Jacob Whittle shined brightly at the 2nd gala that took place on May 6th and the fastest 100m freestyler ever for his age was back at it this weekend.

Taking on a variety events in Sheffield, Whittle first took the men’s 14/15 crown in the 400m IM, clocking a time of 4:48.86 to win age group gold. His time was just over 3 seconds slower, however, than the personal best he established in the morning heats. Stopping the clock in 4:45.41, Whittle nailed a lifetime best in the event to take the top seed.

The teen also took flight in the 100m fly event, racking up the gold in his age group in a time of 1:00.29. As with the aforementioned 400m IM, Whittle was quicker in the heats of this race, too, registering a new personal beset of 59.76 to take lane 4 for the evening final.

Whittle also struck gold in his age category for the 400m freestyle, hitting the wall in a mark of 4:13.00. That was well off his PB of 4:06.44 from the British Championships, but enough to add more hardware to his impressive East Midland Regionals collection.

Another age group stand out from the British Championships was 17-year-old William Bell the Leicester swimmer who broke the British Age Record in the 800m freestyle, with his silver medal-garnering 8:01.20. Bell was present in a big way here in Sheffield this weekend, earning the 400m IM gold for his age group in a time of 4:27.39. That checks-in as a new best time for the teen, taking over his 4:27.75 notched in France last year.

Bell also topped the podium in the 400m free in a time of 3:57.53, marking the 4th best time of his young career. Bell’s lifetime quickest rests at the 3:54.87 he notched for silver in the Transition Final at this year’s British Championships, but he’s been under the 4:00 mark a dozen or so times.

Mildred’s 100m free time was especially eye-opening, seeing how his in-season mark here would rank his performance among the top 20 ever among British 16-year-olds. The Northhampton swimmer already holds the distinction of owning the 5th fastest performance for his age ever in British swimming history with the 51.05 he threw down at the British Championships.

15-year-old Freya Colbert also did damage for her Nova Centurion club, winning the women’s 14/15 400m freestyle massively in a time of 4:18.23. That time was just off her PB of 4:17.09 logged at the British Swimming Championships where she finished 6th in the senior final.