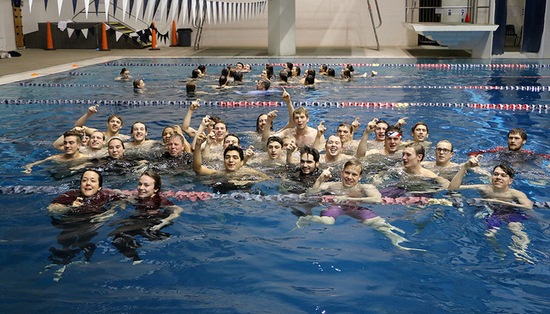 The Whitman women won their fourth straight Northwest title, while the Whitworth men claimed their third in a row. Current photo via Whitworth Athletics

FEDERAL WAY, Wash. – The Whitman women and Whitworth men have claimed NWC Championship titles at the 2020 Northwest Conference Swimming Championships at Weyerhaeuser King County Aquatic Center in Federal Way, Wash. The Pirates recorded a total of 680.5 points, while the Blues finished with the highest recorded team score since 2016 with 718.

The finals session began with the 1650 freestyle races, with all top-three men’s finishers nabbing B-times. Linfield’s Matt Lemire took first place with a time of 15:48.82, followed by Dylan Reimers of Puget Sound’s 15:52.52 mark, and Connor Florey of Whitworth’s 15:52.76 time. Whitworth’s Cameron Lyon placed first for the women with a 17:51.79 time, followed by the Whitman duo of Sarah Davidson and Kathryn Woodburn earning marks of 18:00.81 and 18:01.68 to place second and third, respectively.

Whitworth’s Hannah Galbraith earned her second individual title of the weekend in the women’s 200 backstroke with a time of 2:04.14, with Isabel Hendryx of Whitman placing second in 2:05.97. Linfield’s Molli Hartzell rounded out the medalists in third with a 2:06.43 mark. For the men, Whitman’s Tanner Filion nabbed a 1:48.51 to take first, with William Walters of Whitworth in second with a 1:50.42, and Daisuke Fitial of Linfield with a 1:51.30 time, good for third.

Jamie Siegler swam a 2:21.58 in the women’s 200 breaststroke for the Pirates, with Whitman’s Shea Tsuha finishing in 2:24.91 to take second, and Victoria Nguyenle of Pacific Lutheran finishing third in 2:25.01. In the men’s 200 breaststroke, Whitworth freshman William Ryherd was the individual medalist with a B time of 2:03.62, followed by teammate Alexander Henderson’s second-place finish of 2:05.74, and Seth Koivisto of Pacific Lutheran’s 2:06.61 third-place time.

The Whitman women continued to rack up their points with Bella White’s first-place finish in the women’s 200 butterfly, recording a time of 2:05.91. Cameron Lyon of Whitworth came in just short of three seconds later with a 2:08.02 second-place time, followed by Pacific Lutheran’s Claire Cranch, who touched the wall in 2:08.97.

In the final events of the championship, Whitman (Felley, Tsuha, Hill, Selznick) capped off their remarkable team win by taking first-place in the women’s 400 freestyle relay with a time of 3:31.04. Puget Sound (Callahan, Haven, Brown, Skog) contributed to their fourth-place finish by taking second in the relay with a time of 3:34.32, with Whitworth (Siegler, Hoff, Lyon, Galbraith) placing third in 3:36.86.

The Linfield men (Oliveira, Sutton, Simpson, Donaldson) finished their championship efforts by taking first-place in the men’s 400 freestyle relay with a 3:02.99 time. Pacific Lutheran (Trieu, Koivisto, Mortensen, Johannessen) swam to a second-place finish in 3:06.93, with Puget Sound (Reimers, Cole, Kolb, Champagne) locking in a third-place finish with a time of 3:07.10.