What’s the Buzz On The Web: Twas the Night Before Swimming 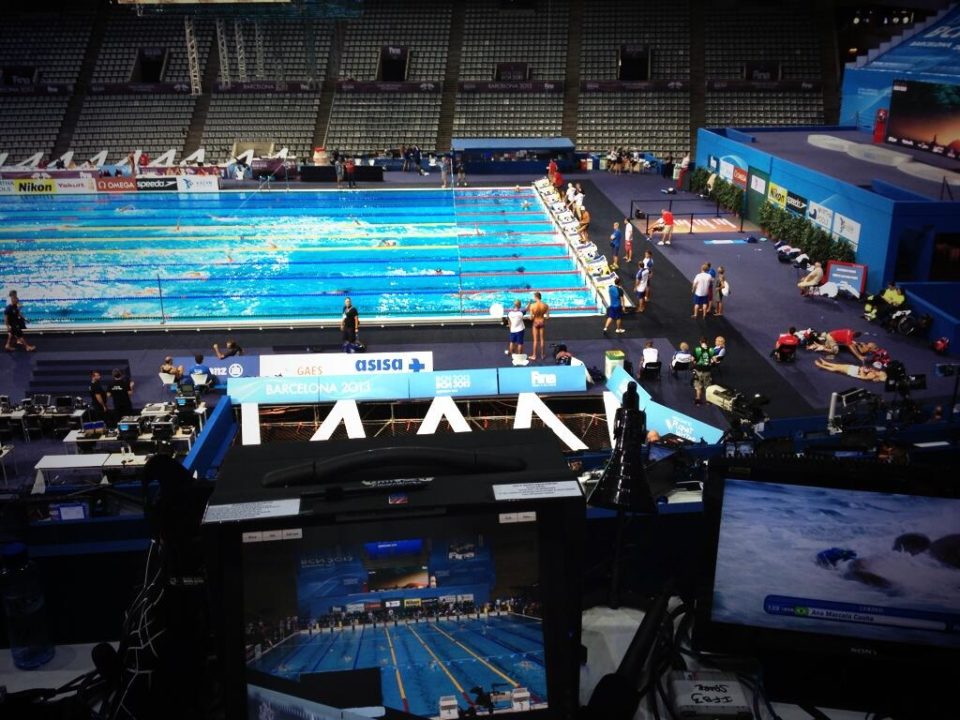 We’re going to try something new for the World Championships. We may tweak the title a bit, but for now, it shall be named “What’s the Buzz on the Web,” with a subtitle of “television commentators’ cheat sheet.”

Some of you may have picked up during the World University Games that the commentators were basically reciting the SwimSwam comment sections. Now, this is no guarantees that they were actually reading SwimSwam, as compared to somewhere else, but we figured we’d help them out, and make a sort of cliff’s notes of what comments have been trending hot, and what the hoi polloi of the swimming community can’t stop talking about.

We’ll specifically curate those comments related to the World Championships, though if all goes well, perhaps we’ll expand it further.

So, the pre-meet conversation (which, admittedly, is somewhat influenced by our posts) has centered around a few things in the lead-up.

Belmonte or Hosszu: Will the Stick to their Guns?

Our readers are both marveling at their endurance, and questioning their decisions:

Mireia Belmonte is certified CRAZY!
or at least her coaches!

And I thought Hosszu was an iron woman, well this Belmonte must be adamantium woman!

We thought that Kevin Cordes was the key to the medley relay. Our commenters, however, feel that the backstroke leg is, in fact, will be the difference-maker.

The key for Australia is Delaney.
If Delaney can get to 53 low, yes they have very good chance to win, but if he swims 53 high, they won’t be able to overcome US.

Kosuke Kitajima, after being initially named a “relay-only” swimmer by the Japanese Swimming Federation, was a surprise entry into the individual 100 breaststroke.

Some of our readers thought that only made sense, others didn’t, and others questioned the qualifying standards for Japan altogether.

So what is the point of a qualifying standard that keeps out the 5th fastest time in the world?

“Bossanova,” notorious for trying to rile other commenters up, retorted that:

The Japanese Swimming Federation is gonna feel silly doing this for Kitajima after he goes slow in that 100 breast.

Kitajima was already on the team, why not let him swim the 100, it doesn’t disadvantage any other swimmer anyway.

The meet starts tomorrow, are you ready? All the links you need to follow can be found here.

I’m rooting for ranomi kromowidjojo to split 51+ in the relays (just because she has javanese blood in her, just like me 🙂

Also good luck to I Gede Siman Sudartawa (an Indonesian of Balinese descent) in the final heats of both 50 and 100m back! and break his PBs and national records!

Somebody is going to make a statement in the men’s race. Hopefully, a clear one, a sub 47.5 lead off or a 46low anchor. My gut feeling is that the favorite for the 100freestyle will establish himself tomorrow, clearly and unequivocally.

My gut tells me we will see a few jaw-dropping splits in both relays tomorrow.

I looked up the fastest men’s textile relay split, and was absolutely blown away. I could never have guessed it, and I bet most people here wouldn’t have guessed it either. Magnussen? Nope, he usually leads off and was lacklustre when anchoring. Adrian’s 46.85 in the medley relay? Nope. Agnel’s clutch 46.74 in the 4x100m freestyle final? Closer but nope.

Is it Peter van den Hoogenband ?

Yeah. Insane, even for Van den Hoogenband, he rarely went below 48-low in individual swims. It was two whole seconds faster than what he swam individually to get silver at the same meet.

“I bet most people here wouldn’t have guessed it either”

Now you are underestimating swim fans, that swim by VDH is pretty famous.

Damn…tomorrow never comes!haha…
I am rooting for WR´s, 200breast,200back…who knows, a WR in 100free with Magnussen will be great for our sport!
Rooting for Cate Campbell deliver what i think it was always there(a super-speed).
Rooting for Cesar Cielo knees work fine and he bests his textile bests(his goal for this Worlds Champs).
Rooting for Thiago Pereira first medal in a WorldChamps.
And rooting for Brazil to qualify for men 4x100free final.

I’m rooting for Brazil’s m4x100 free final too, as I’ve been in the past championships, cause we really want to see the absolute best final!

For guys who wants a video feed live of Worlds in portuguese, R7 portal will streaming finals live in:
http://esportes.r7.com/ao-vivo/r7-transmite-ao-vivo-o-mundial-de-esportes-aquaticos.html

Sorry, but the audio will be in portuguese.

DDIAS, I wouldn’t mind the Portuguese audio at all, unfortunately I get a warning in that language “Sorry, but this video can not be displayed outside the Brazilian territory”! (I’m currently in the US)

Thanks for the link at any rate.

Sorry, i forgot about that.
You can turn that block down with a proxy, TOR or using HotSpot Shield, but will be a pain if you are not tech savvy.

I’ve been trying the “Hola Unblocker” extension for Chrome. Switched the comment on that video to unavailable in my region to just unavailable at this time.

Probably worked because will be unavailable till the moment of live feed.
For everyone around the word: try to connect with a brazilian proxy(or get a BRA IP).

I think it worked. I just got the extension to play BBC videos and I’m in America. It might be a little slower, but I think this’ll work.

If streams don’t work in your country, install this extension and pick the country the stream’s from. Voila!? I think…

Some news from the Danish camp, Lotte Friis has scratched the 400 free to concentrate on the 800 and 1500.

That must be a VERY late scratch. She’s still listed on the start sheets as of Midnight Barcelona time. Will they reseed everything or leave the lane open?

To those who watch live, please let us know the results IMMEDIATELY! Give race details if you can. Thanks!

Hey suzzie2012 & Lane Four – we’ll have live recaps going in the morning, that would probably be the best place to discuss the session! We’ll keep that post at-or-near the top until finals begin.

Excellent! Thank you, Braden! Braden are you in Barcelona????? Is anyone from SwimSwam at the pool????

Arrived here in BCN today! Can’t wait until tomorrow afternoon! (actually, it’s 1:50am, so I guess I could say THIS afternoon)…..

Have a great time, PAELLA747 and please post some photos if you can.

That would be greatly appreciated, especially if they are as detailed as possible.

Ugh, I’m all about the opposite – when I can’t watch live, seeing race results written in post titles up on my RSS feed makes me sads.

Hozzu and Belmonte-Garcia are trying to do more-than-Phelpsian schedules, but I’ll bet neither will swim heats-semis-finals of all 6 individual events, and neither of them will have 3 relay finals, obviously.

What’s the buzz on the deck re: Herisimenia? Really sick, or busted again??

People read these comments? And that stuff influences what people say on TV?