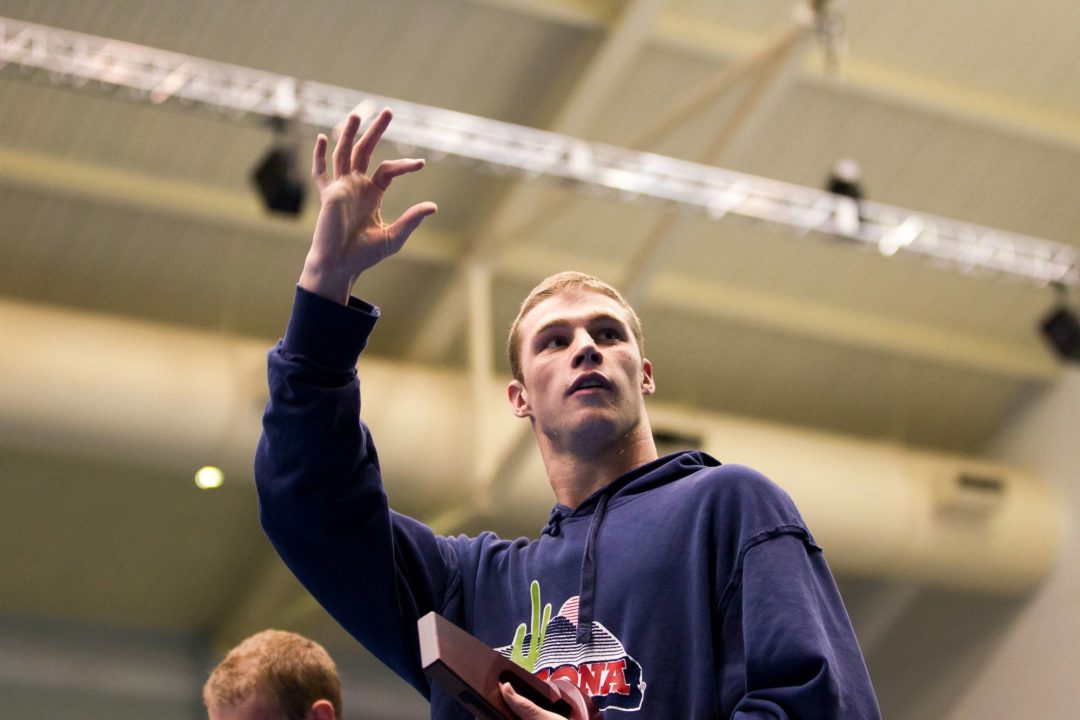 There's a lot of weight on Kevin Cordes' shoulders in the 400 medley relay, as he'll need to be competitive with Australia's Christian Sprenger.

At the 2012 Summer Olympics, the Americans had a sizable advantage in this 400 medley relay. They won by two seconds ahead of Japan and Australia, but that was with Brendan Hansen and Michael Phelps through the middle of their relay, though, and they are both retired in 2013.

The Americans have two pretty good swimmers to step in and replace them. On the breaststroke leg, they’ve got Kevin Cordes, whose potential nobody can quite agree upon, and Eugene Godsoe, who rocked the US National Championships and World Championship Trials.

As good as they are, though, the Americans will likely have to battle a little more at the wall for this win, as compared to last year when Nathan Adrian had relatively clean water en route to a magical 46.85 closing split.

The Japanese have also found more holes this year. They still don’t have a freestyler (Takuro Fujii was only 48.50 anchoring this relay to silver at Worlds – which shows how big their lead was going into that leg), and their breaststroke situation is very shaky.

For relays, let’s take the probable lineups (keep in mind this is the end of the meet, so coaches should have a good idea of who’s hot and who’s not when the meet rolls around), and look at what each team’s strengths and weaknesses are. Times included here are their best of 2013.

This is as uncertain as the Americans’ medley relay has been in a long, long time. There’s plenty of reason for optimism, though, as Nathan Adrian had the best anchor of the entire field in London last year (46.85), Kevin Cordes has sky-high potential, and the Americans have options on the backstroke and butterfly legs.

My best guess would be that Lochte gets the butterfly leg in finals, though he’ll have to show what he’s worth in the individual.

The Americans probably won’t beat the time that they won gold with at the Olympics last year, but they’re certainly still good enough to be under 3:30. Cordes has a big weight on his formidable, but young, shoulders in this relay. If he can go under 59 seconds, the Americans are in good shape.

Even without relay starts, the Australians’ aggregate time is within four-tenths of what they went at the Olympics. They’ve got two phenomenal legs, in world leaders Christian Sprenger and James Magnussen, and they’ll need that as their backstroke legs and butterfly legs aren’t quite of that quality.

Delaney could be the key here. He looks very good this year, and if he can go 53-low, and everyone else takes-care-of-business, then the Australians have every-bit of a gold-medal worthy relay.

This Japanese relay won silver at the Olympics, and then promptly proceeded to just implode. It’s scary to say it, but Japan actually has a huge weakness in breaststroke: their fastest this year is a 1:00.00, and he’s not even on this roster. Takeshi Matsuda hasn’t been very good, opening the door for Yuki Kobori to possibly take his spot on this relay at Worlds, and Fujii has struggled in his sprints (and has been deemed a “relay only” entry for Japan).

The good news is that Irie is still strong, but man is this relay really in trouble. One wonders if they can fit Kosuke Hagino in somewhere. Maybe the Japanese have changed their overall strategy to go slower in season and have a big taper at year’s end, like most of the world, rather than their typical all-fast-all-the-time history.

The Brits are without Liam Tancock on the backstroke leg this year. That, however, will be little more than a rattle to them, as the rest of the relay is swimming extremely well this year: including his replacement Chris Walker-Hebborn, who’s already been faster than Tancock was leading off the medley at the Olympics last year. Michael Rock’s butterfly has been incredible, and Brown showed last year that he’s a clutch relay performer. Don’t expect much of a post-Olympic letdown for the Brits, who were 4th in London.

The Hungarians have some options on this relay. Cseh swam the backstroke leg at the Olympics, but with Bernek swimming pretty well this year, they may opt to put Cseh on the butterfly leg instead – which would really improve that leg for them.

The freestyle leg here is still the weak-point. Takacs has been their fastest this year, but it was Dominik Kozma who anchored them at the Olympics (and did so fairly well compared to his flat start) last year. They’ve got a shot at leading to 300 meters, but could give more than two seconds back to guys like Adrian and Magnussen.

The one German relay that won’t be hurt by Paul Biedermann’s absence is this medley, as he wasn’t even on it at the Olympics.

Steffen Deibler had the second-best fly split on the medley at those Games (behind only Michael Phelps), and has as good-of-a-chance as anybody to win the individual 100 fly. Helge Meeuw has finally given up the backstroke spot on this medley, which will be the biggest challenge for Germany. Jan-Phillip Glania, their fastest this year, hasn’t even been an ‘A’ cut, and he didn’t make this World Championship roster (he swam at the WUG’s instead). Instead, it looks like Felix Wolf will have that spot. The Germans will be playing a big game of catch-up.

China failed to final in this race last year, taking 11th at the Olympics. Most of the relay, though, is swimming well this year, especially freestyler Ning Zetao, who should be the new anchor.

The Chinese are hurting badly for a breaststroker. They might have enough to final, but a medal is still a long-shot.

The Russians have every single piece that they need to medal in this relay. Knock on wood. We’ve been saying that for a long time about the Russians in this medley, but at Worlds in 2011 and the Olympics last year, they bombed out in prelims. At both meets.

Is this the year the Russians finally put things together? Morozov has no problem swimming at big meets, and the Russians were unbelievably good at the World University Games.

The French, like the Russians, routinely fall short of expectations in this event. At the Olympics, it was due largely to Yannick Agnel not stepping up on the anchor, like he did in the 400 free relay.

But D’Ortogna is swimming as well as he ever has, Stravius is a new star, Lacourt seems to be at least as good as he was last year, so the French should final. After that, it’s a lot about moving parts to see how high they can get.

Note: The Netherlands, who final’ed at the Olympics, didn’t enter a relay at this year’s World Championships.

Though it goes against the aggregate times, I like the Americans in this race. Adrian will be close enough to Magnussen (if not better than) to close a lot of that gap, and Cordes should have a lot of drop to go too (we’ve seen him go huge taper drops in the past). Lochte and Grevers look both maybe in a little less shape than they were last year, but expect them to both put it together at Worlds

I don’t think the French will medal in this event. I think they have a little post Olympic let down and the US depth is more than enough to fill the gaps. I see Cordes as being dominant on the breast leg. A 49.5 short course might not mean a lot to those who don’t swim yards but that split is epic and should be equal to a 57 high meters split. Godsoe and Lochte on fly are as solid as the Aussies or Russians and I don’t see anyone running down Adrian.

I agree France will not medal in this event; France has never even won medal in olympics or worlds in this event. Can’t see this change this year.

I think Russia is overhyped in this event. Can’t see them medal as well.

I don’t see Usa beaten in this relay . Cordes and Godsoe or Lochte are solid and will step up in the final . I see Plummer for the bacstroke ( he has been great at trials ) and of course Adrian won’t let anyone touch the wall first . The Aussies will be very close and the russians might sneak for third …. Or Japan .

A little reminder of what happened last year in London.
http://www.youtube.com/watch?v=2alP2ZlmmFA

All of Australian legs swam sub-par, they really should have won silver easily if all or most of them just swam the times they were capable of.