What Does a ‘Good Time’ Look Like in the New Olympic Swimming Events? 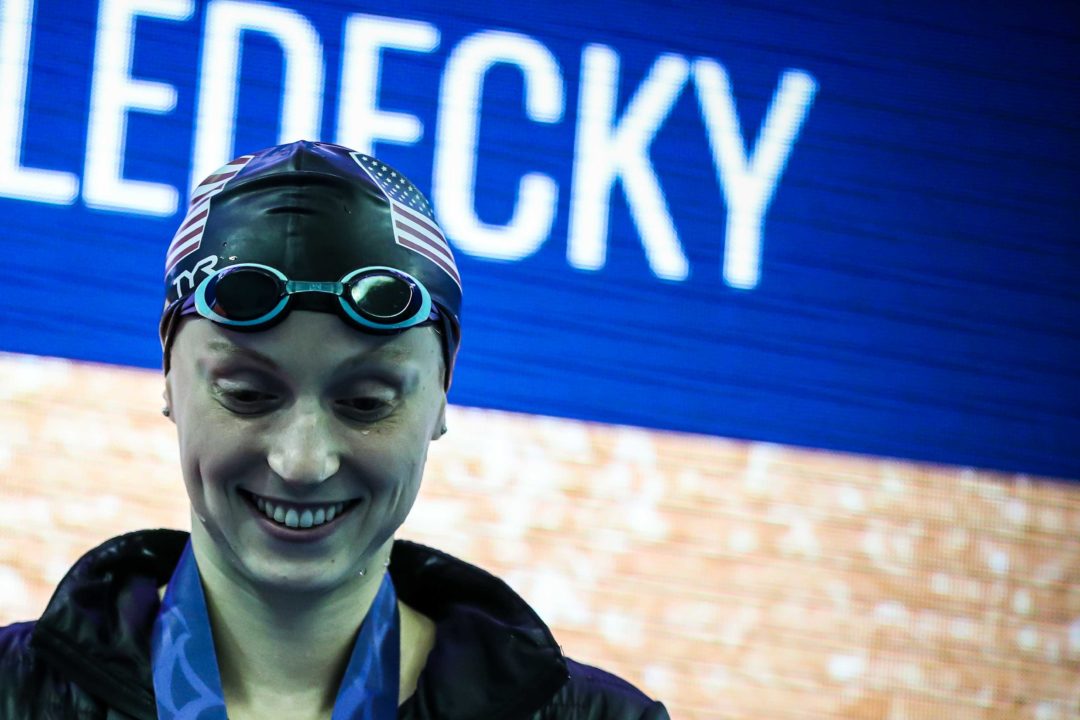 Katie Ledecky is already such an outlier in the women's 1500 free, that even inclusion as an Olympic event isn't likely to bring that record down. Stock photo via Jack Spitser/Spitser Photography

The former two races, long overdue, now bring full alignment to the men’s and women’s Olympic schedules. While there has been limited ‘enthusiasm’ for the addition of more distance rises from the swimming public, they’ve generally been supported for what they stand for, which is unifying the schedules.

The mixed medley, on the other hand, has been much more polarizing, with some (including this author) liking the concept and the strategy that goes with it, while others have labeled it a “circus act” event. It fits in the IOC’s general strategy of experimenting with mixed-gender events first at the Youth Olympic level, and now increasingly at the Olympic level.

For swim fans, these new races joining the Olympic lineup means a new level of fluency. While interest in swimming besides the Olympics is growing, the Olympics are still the grandest of games, and events that are Olympic events inevitably receive more focus and attention.

There’s another piece to this puzzle, of course. Even if events are World Championship events, until they’re Olympic events, they’re never going to have the full weight of the swimming populace. Coaches will tailor training to these events a little more, and further, there will be a cream-rising-to-the-top effect: a female swimmer whose natural gift would have been for the 1500, for example, might fight that nature to try and improve speed to be competitive in the 800, and live with the impact of that upon her natural endurance. In other cases, a true top-tier swimmer might just bypass the non-Olympic event altogether. We never, for example, saw Michael Phelps racing the 50 fly at the World Championships.

The World Record drop was less pronounced in the first four years here, falling by 1.9% from 1988 through 1992.

The finaling time from 1988 to 1992 dropped from 26.12 to 25.84. That is a less pronounced change from the men of 1.0%, though there are some heavy doping implications in this race that could skew that data. The women’s 100 free still dropped by less.

This one is an outlier among the three races. When the 1996 Olympic Games happened, the East German women of 1987 had the World Record at 7:55.47. That record wouldn’t be broken again until 2004, but again, dubious data because of the doping implications of the East German women. Relay records of any scale rarely last as long as that one did, and for that matter, while the 800 free relay was a new Olympic event, the 200 free that made up its parts wasn’t.

I suspect we’ll see this again with the latest round of new events. The mixed 400 medley relay records and depth probably won’t drop as quickly between the Tokyo and Paris Olympics, because all of those swimmers were already going to be on their Olympic teams for swimming those exact races.

The truth is that we won’t likely see a dramatic Olympic impact on World Records in any of these races. That men’s 800 swim by Zhang Lin, which was easily the highlight of his career, has felt like an outlier for years even among the outlier that is the concept of a ‘World Record.’ The same is true for Katie Ledecky, who is already so far ahead of any female distance swimmer in history that it already feels like it will be a generation or two before we see someone seriously attack her records.

So the key will be in depth – what times it takes to earn a medal, or an A-final swim at a major meet. That’s where we’re most likely to see the impact of these events at the Olympic level, at least immediately.

I’m not sure the conclusion follows, Braden. All three of these events debuted at the 1986 Worlds – the 1988 Olympics would’ve been like the 3rd major international with the 50 (after 1987 Pan Pacs). So it’s not super surprising that like… the 50 records were broken 11 times from 1986 through 1988, just because of the new-ness. I’d give more weight to the novelty than to the Olympics.

The men’s 800 and women’s 1500 have been around for a long time, I think just the fact that they’ve been contested for so long means we’re unlikely to major Olympic impact.

Another insightful comment from our favorite relay namesake commenter.

Glad to finally see distance swimming getting some love.

No one will ever win 5 individuals again, even IF they live in a country with a shot at 3-4 relay golds. Calebs max would be 7 golds, Katie COULD win 4 individuals but wouldn’t a top 2 100 freer in a million years, no way in mixed relay . The Phelps effect is real, the level of athletes choosing swimming will only increase now that it’s been “cool” for the last two decades. Will be interesting if/when the 50 strokes are included one day, unlikely given the max team limits but who knows. I for one would support a final day SCM 100 IM, 2 slots from each country from the current rosters, in a accelerated prelims/final session. Have… Read more »

At the age of 24, a 200 FR/1500 FR double/double (heats/final) would be the very definition of suicidal even for Katie Ledecky. Besides, a bird in the hand (1500 FR) is worth two in the bush. The evening heats of the women’s 1500 meter freestyle is scheduled on the same day of the morning final of the women’s 400 meter freestyle.

The claim that no one will ever win 5 individuals again seems pretty unlikely to me. To me part of what is so amazing about Phelps’ 5 wins isn’t just the wins, but that he could have had a legit shot in either backstroke or the 400 free as well. The guy was gold medal capable in at least 8 events at the same time (We used Spitz as the benchmark, but in reality, Phelps was so much more versatile and dominant than Spitz all around). I say that to illustrate that it wouldn’t take another Phelps to hit 5 wins, and never mind on the women’s side. It might be a stretch, but there is potential for someone like… Read more »

Ignoring the error, that 800 free record might be the most unbeatable of any of the super suit records. Only one person has been within 6 seconds, and that was Ous Mellouli in the same race (7:35). Thorpe was 7:39, Hackett and Sun were both 7:38. I bet someone breaks 1:42 in the 200 before someone gets the 800 record.

Dont think that will be broken i my lifetime (but I am old)!

Only two super suit world records remain on the books for the women’s side of the ledger:

Makes you wonder if these 2 records had a little bit more than just a supersuit going on.

A Chinese swimmer with a time recorded on Chinese soil.

Not to mention it was done in a LZR, not an X-Glide

Watching a very fit Paltrinieri swim the 800 last week and still be eight seconds off the WR…that time may be more ridiculous than the 200 WR.

Katie Ledecky’s impact on women’s distance swimming is so much deeper and more profound than the inclusion of the 1500 into the Olympics. Her impact goes way beyond her record as we can see from all the women’s distance events Olympic and not. That will challenge any attempt at quantifying this impact in a way that will be very tough to filter out. I think that is agreeing with the content of the article but counter to the last sentence.

Yeah I think it was the SCM record .

I was gonna say, I thought I would’ve remember someone going back to back 3:40’s