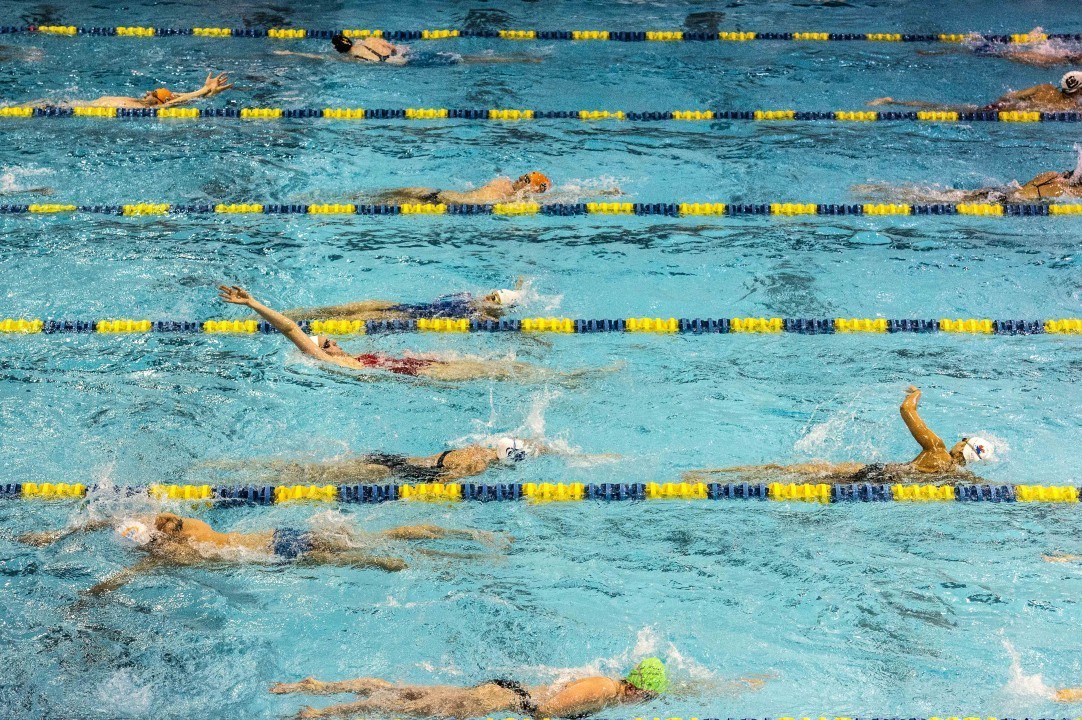 The Westport Weston Family YMCA Water Rat Swim Team and the boys and girls swim teams of Staples High School raised more than $37,000 with “Swim for Nepal,” a five-hour event held Wednesday, May 27 at the YMCA’s Bedford Family Center to benefit Save the Children’s relief efforts in Nepal. Current photo via Mike Lewis/Ola Vista Photography

Westport, CT, May 29, 2015 – The Westport Weston Family YMCA Water Rat Swim Team and the boys and girls swim teams of Staples High School raised more than $37,000 with “Swim for Nepal,” a five-hour event held Wednesday, May 27 at the YMCA’s Bedford Family Center to benefit Save the Children’s relief efforts in Nepal.

More than 175 swimmers, ranging in age from 6 to 18, took part in the effort. Swimmers age 9 and over pushed themselves to see how many laps they could swim in 60 minutes; younger swimmers swam for 30 minutes.

Water Rat and Staples coaches strive to teach swimmers the value of hard work, persistence and sacrifice – both in and out of the water. So, after a devastating 7.8 magnitude earthquake that struck Nepal on April 25, which was followed by a second temblor of 7.3 on the Richter scale on May 12, it seemed obvious to Staples High School junior Mark Schachter that he should mobilize his high school and club teammates to “Swim for Nepal.”

Schachter said, “Swimming has given me so much, and I am grateful for that. That’s why I want to use the sport to give back when I can and this is a time when there is a real need. People in Nepal need help right now.”

The earthquakes have killed more than 8,800 people and injured more than 23,000. Entire villages were flattened, leaving hundreds of thousands of people homeless in one of the world’s most impoverished countries. The monsoon season is only a few weeks away and people in Nepal urgently need shelter, clean water and health care.

“My teammates and I cannot imagine what it would be like to live through two earthquakes in two weeks. But we know the children in Nepal must be hungry, cold and scared,” Coyne said.

Sanjana Shrestha from Save the Children Nepal said: “The effect of this latest earthquake is deeply felt, and is setting people back psychologically, as we were all trying to creep back to some sort of normal life. Children and families in the worst affected areas are understandably terrified, with many sleeping outside.”

This was the fourth time in 10 years that Westport swimmers raised money for Save the Children. In 2005, the Water Rat Swim Team held a “Swim for Asian Tsunami” relief, raising $19,000. In 2010, the Water Rats and Staples High School swimming held a “Swim for Haiti,” raising more than $45,000. And in 2013, the Water Rats “Swim for the Philippines” raised more than $43,000 for Save the Children’s Typhoon Haiyan relief fund. Senior Max Wimer, a current Staples boys swim captain (who will be swimming at Wesleyan University next year), organized the Philippines event.

“Save the Children is so grateful to have this longtime support from the Water Rats and Staples swim teams,” said Abby Safirstein, Associate Director of Humanitarian Operations. “It was great to see all of the energy and commitment from the kids, the parents and the coaches during ‘Swim for Nepal.’ Our staff in Nepal will be so appreciative of the support received from this wonderful initiative.”