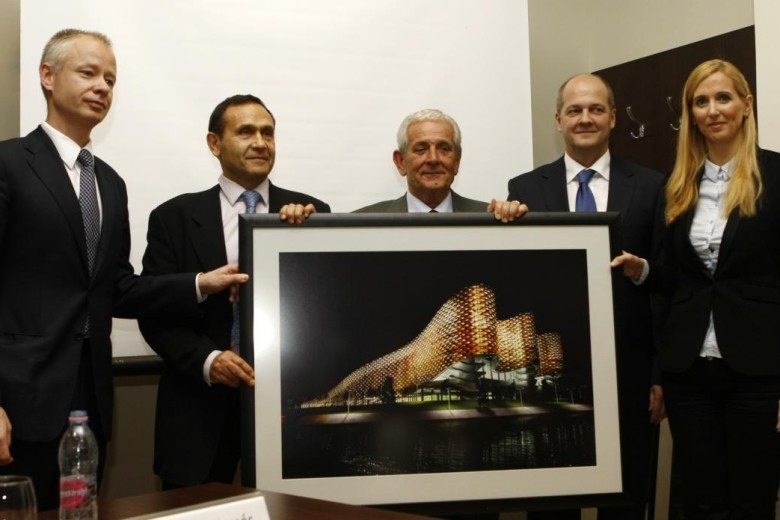 Taking over the 2017 FINA World Championships at the last minute could cost Hungary up to 49 billion forints, or about $177 million, Hungary Today reports. Archive photo via The Hungarian Swimming Federation

Taking over the 2017 FINA World Championships at the last minute could cost Hungary up to 49 billion Hungarian forint, or about $177 million, Hungary Today reports.

Hungary jumped into the running very late for the 2017 event, which was originally slated to go to Guadalajara, Mexico. Mexico pulled out of hosting the event back in February, citing the extraordinarily high cost of hosting a FINA event.

Budapest, Hungary popped up as the next likely host city shortly after. Budapest was already slated to host the 2021 World Championships, so the move simply moved up the time-table some for Hungary.

The brand-new facility was already set to be opened by 2017, as Budapest was already the host for the 2017 Junior World Championships.

It’s a major coup for swimming-crazy Hungary to host both events, but it comes with a steep price tag. Hungary Today reports that the World Championships could cost the host nation 49 billion forint, which roughly equates to $177 million in U.S. dollars or $157 million Euro.

Those costs are why FINA is having some speedbumps lately in getting their major events hosted. Mexico’s abrupt withdrawal was the biggest story, but Canada’s Lac Magog also pulled out of hosting one of FINA’s Marathon Swimming World Cups this week, again citing the cost to the host.

The United States, consistently one of the world’s biggest and most successful swimming nations, never appears in the hunt for the major FINA events, and when Mexico pulled out of hosting the 2017 meet, USA Swimming’s president called it an “impossible” option to have the U.S. take over hosting duties, given the high price of the event.

The flip side of the coin, obviously, is the prestige of hosting a major event, which the Hungary Today piece touches on. The 2017 World Championships, which feature swimming, diving and open water swimming among other aquatic events, could draw up to 5 billion TV viewers, according to Hungary Today,  (though that seems like a very generous estimate) and the event is being considered the largest sporting event ever to take place in Hungary.

I have often wondered why the United States never seems to even be mentioned to host Long Course World Championships. You would think the Worlds #1 swimming power would want to have the meet here at least occasionally. Are they blackballed or something?

I always ask the same question and every time I’m answered here on swimswam that USA doesn’t have the facility to host that meet and that it’s too expensive.
I also asked the same question about track and field. USA has never hosted the outdoor world championships while also being the world best track and field power. But miracle. Eugene, Oregon, will host the world championships in August 2021!
So don’t despair! It will happen one day! 🙂

The USA bid for the 2005 World Aquatics Championships, but Long Beach, CA finished runner up to Montreal in the final vote. Then Montreal realized it really couldn’t afford the event (the original head of their organizing committee sadly committed suicide over what he saw as a great failure) and at one point FINA was talking about pulling the event from Canada, but Montreal got the event back when FINA rebid the event a few months before it was scheduled. Long Beach, seeing just how insane the costs were even then, later said they were glad they hadn’t gotten the meet because the city would have been paying off the debt from it for a couple of decades, and apparently… Read more »

why dont we just drop the corrupt FINA and start from scratch with a new governing body?

Someone needs to educate FINA and warn Hungary about the difference between a BILLION and a MILLION, as well as share some real-world statistics on television viewing habits. There is no way that ~70% (e.g., 5 BILLION) of the entire world’s population (e.g., 7.2B according to http://www.census.gov/popclock/) is going to tune in the swimming championships.

I hope no one in Hungary has built any economic impact forecasts using these outlandish assumptions.

If I’ve well understood, that’s a cumulative audience.
An estimation of 4,5 billion people watched the last world championships in Barcelona 2 years ago.
They count the live, the delayed, the highlights, the news, the sport magazines….
So if you have watched 2 seconds of a race by accident during the TV news, you are counted as a viewer. I don’t know how they count that. 🙂