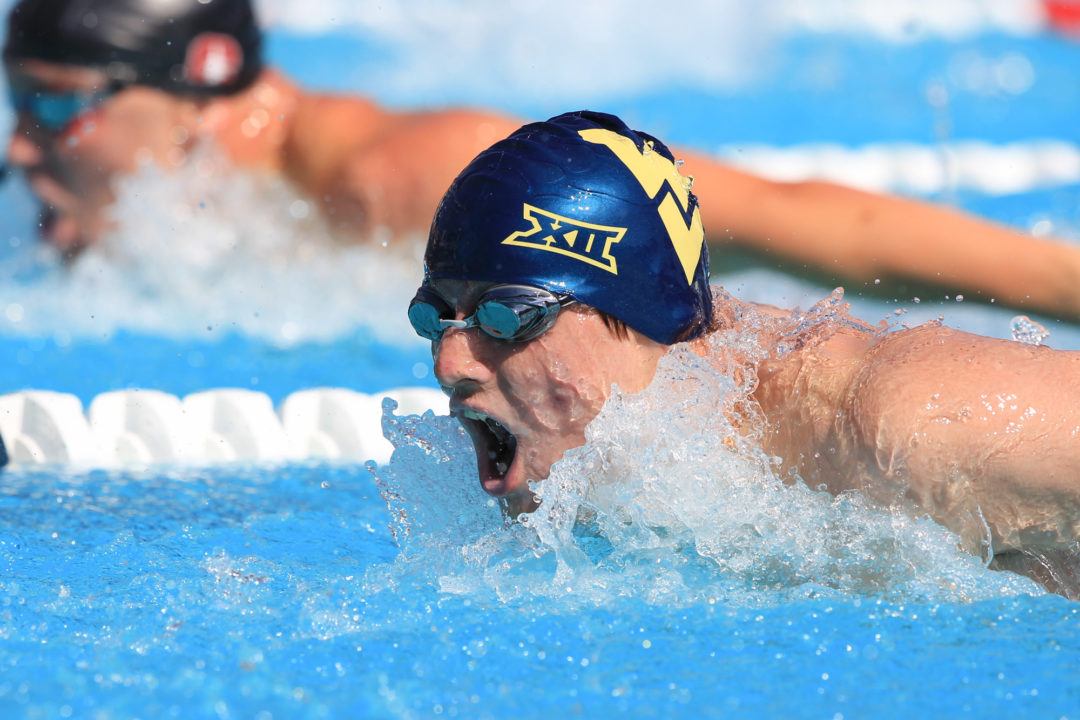 MORGANTOWN, W.Va. – The West Virginia University men’s and women’s swimming and diving teams swept George Washington in the Mountaineers’ final dual meet of the regular season on Saturday, at the Aquatic Center at Mylan Park in Morgantown.

The men’s team topped George Washington, 178-118, while the women grabbed the dual-meet win by a score of 162-138. In all, WVU tallied 23-of-32 event wins on the afternoon, as 13 different Mountaineers tallied victories in the win.

“I’m very proud of the seniors, and it was awesome to share today with all of them,” Mountaineer coach Vic Riggs said. “They will be missed, and it was great to send them out with a win. I thought the women’s team responded well from Thursday’s loss and fought hard for the win, which was great to see. Once again, our divers did a great job to help us secure the wins. The men competed well, and to finish the season with just one loss is great to see,”

In the first event, the 200 medley relay, the women’s team of junior Ally VanNetta, freshman Mathilde Kaelbel, Bullock and senior Julia Nilton finished in second with a time of 1:45.52. For the men, junior Angelo Russo, sophomore Fausto Huerta, junior David Dixon and freshman Hunter Armstrong grabbed a win in 1:29.33.

Junior Ally VanNetta then grabbed a second-place finish in the 100 backstroke, finishing in 57.32. Russo and senior Austin Hartke finished first (48.75) and second (50.63), respectively, in the men’s event. Huerta tacked on another victory for the men in the 100 breaststroke in 55.36, while Kaelbel placed second for the women (1:06.56).

Two more Mountaineer victories were added just before the first break in the 50 free. Haimes finished first for the women in 23.61, while Nilton finished second (23.79). Armstrong collected the men’s event victory in 20.49, and senior Sam Neaveill took second place (21.08).

For the men, senior Austin Smith led the way in the Mountaineer sweep, posting a mark of 307.35 on 1-meter. Sophomore PJ Lenz finished in second place with a score of 305.55, and classmate Nick Cover followed in third place (289.50).

“Today was a very good day for the divers, and I’m thrilled with the performances by our seniors,” diving coach Michael Grapner said. “Senior day is always one of my favorite days, and I’m incredibly proud of Brooke (Zedar) and Austin for their successes during their careers. I sincerely thank them for their contributions to the team.”

Following the swimming break, the Mountaineers returned to the competition pool to pick up two more wins in the 100 free. Haimes secured the victory for the women (51.43), while Armstrong grabbed it for the men (44.84). In the 200 back, VanNetta again led the women’s team, taking second place with a time of 2:05.61. Russo notched a victory for the men, touching the pad in 1:51.58. Junior Philip Kay was close behind in third place (1:53.79).

Next, Kaelbel and senior Jack Portmann tallied a pair of second-place finishes in the 200 breast, as Kaelbel finished in 2:22.05 for the women and Portmann touched the wall in 2:06.04 for the men. West Virginia’s long-distance specialists showed off in the 500 free, adding another pair of wins. Gursoy finished in 5:03.62 for the ladies, and junior Max Gustafson tallied a time of 4:34.25 to take the win for the men.

The 400 freestyle relay closed the meet, as the women’s team of Haimes, Nilton, freshman Harna Minezawa and Gursoy combined to post a time of 3:29.18 for first place. Then, the all-senior team of Neaveill, Hartke, senior Trayton Saladin and Frazier finished in second place with a time of 3:05.89.

With the victory, the women’s team moves to 3-3 in dual meets and 2-0 in the Big 12 to close the regular season. The men enter the postseason with a 5-1 dual-meet record, while they are 1-0 in Big 12 competition.

Next up for the Mountaineers is the Big 12 Swimming and Diving Championship, held from Feb. 26-29, at the Aquatic Center at Mylan Park. West Virginia is set to host the conference meet for the first time in program history.

The Mountaineers claimed a 178-118 victory at the Aquatic Center at Mylan Park.

The Buff and Blue team of Chen, Moritz Fath, Max Forstenhaeusler and Dylan Arzoni also posted a victory in the 400-yard freestyle relay (3:04.02).

UP NEXT: GW now gears up for the A-10 Championships, which run Feb. 19-22 at the SPIRE Institute in Geneva, Ohio.

MORGANTOWN, W. Va. – Andrea Ho and Stine Omdahl Petersen claimed two event wins apiece for GW women’s swimming and diving, but West Virginia came out on top in the team race, 162-138, on a competitive afternoon at the Aquatic Center at Mylan Park.

In the Colonials’ final dual meet of the season, Ho earned wins in both backstroke races, while Omdahl Petersen ruled in the breaststroke. Both swimmers, along with Meghan Burton and Becca Brown, were part of GW’s win in the 200-yard medley relay in 1:44.44.

UP NEXT: GW has a little more than two weeks to make final preparations for the A-10 Championships, which run Feb. 19-22 at the SPIRE Institute in Geneva, Ohio.