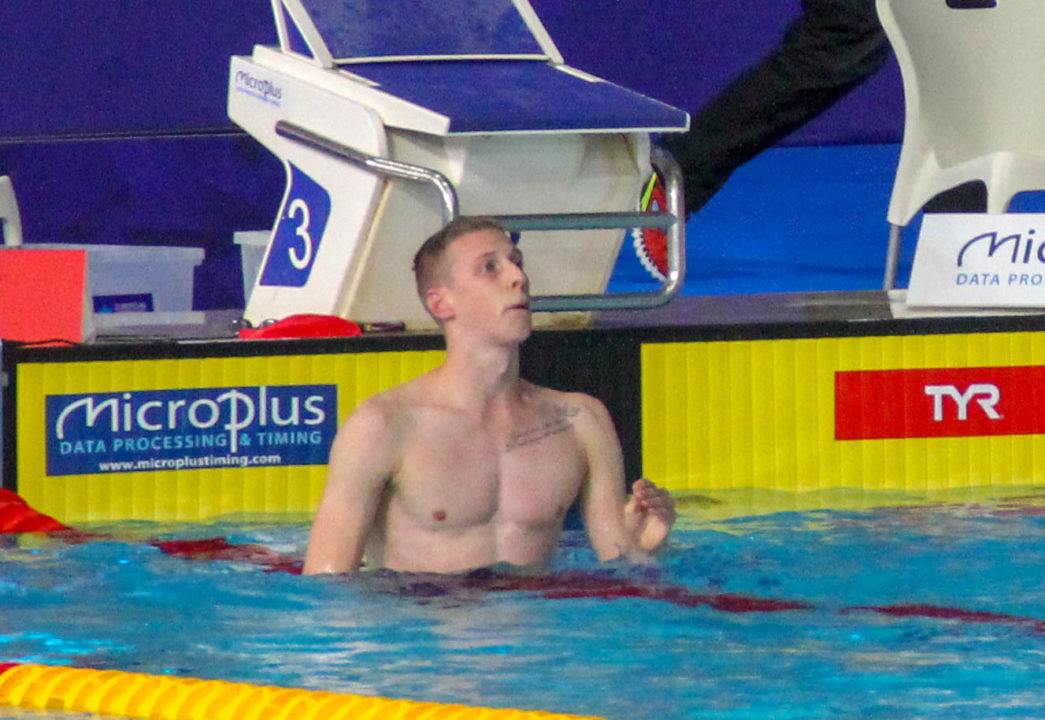 Competing on day 2 of the German Swimming Championships, Florian Wellbrock posted an 800m free time that would have finished 8th in the final in Gwangju. Archive photo via Giusy Cisale

Although American Kathleen Baker swam a lead-off leg on the SG Essen women’s 4x100m medley relay last night at the German Swimming Championships, the former Cal Bear opted out of the women’s 100m back individual event on night 2 here in Berlin.

Last night Baker produced a conservative 1:01.06 lead-off, the fastest of the field by .10, to help her temporary team of SG Essen take gold in an overall time of 4:07.41 in the medley relay. In Baker’s absence in the 100m back event today, however, it was Laura Riedemann who topped the podium, with the 21-year-old World Championships swimmer posting a winning effort of 1:00.22

Baker finished 6th in the women’s 100m back in Gwangju in a time of 59.03, while Riedemann clocked a time of 59.82 to finish 10th overall. For Baker, her 100m back in Korea represented her return to the pool in her first race in 4th months. The Team Elite start suffered a rib injury while sick in April.

The men’s 100m back saw Ole Braunschweig win the final in a time of 54.79, with Christian Diener right behind in 54.92. The pair represented the only swimmers to delve under the 55-second threshold in the event. Diener won the 200m back last night in a mark of 1:57.39.

Another repeat winner was Sarah Kohler, the 1500m freestyle silver medalist in Gwangju. She took that grueling event win last night at this meet but added another gold with a 400m victory this evening. Kohler hit the wall in a time of 4:07.16 to win by 8 seconds. She holds a personal best of 4:0396 from when she won gold at the 2017 World University Games.

Two German Age Records bit the dust tonight, compliments of Anna Elendt in the 100m breast and Silas Beth in the men’s 800m free. For the former, Elendt produced a lifetime best of 1:08.06 to win the women’s 100m breaststroke. That sliced .39 off of her prvoius pB of 1:08.45 from 3 years ago.

Fabian Schwingenschlogl was tonight’s 100m breaststroke winner in a time of 1:00.44, finishing just .24 ahead of Marco Koch.

Florian Wellbrock, the man who made World Championships history by winning both the 10k open water swim, as well as winning the men’s 1500m pool swim, posted a winning time of 7:47.69 to win the 800m free. He holds the German National Record with his lifetime best of 7:43.03 notched this year.

Wellbrock’s time tonight would have finished 8th in the 800m free final at the World Championships.