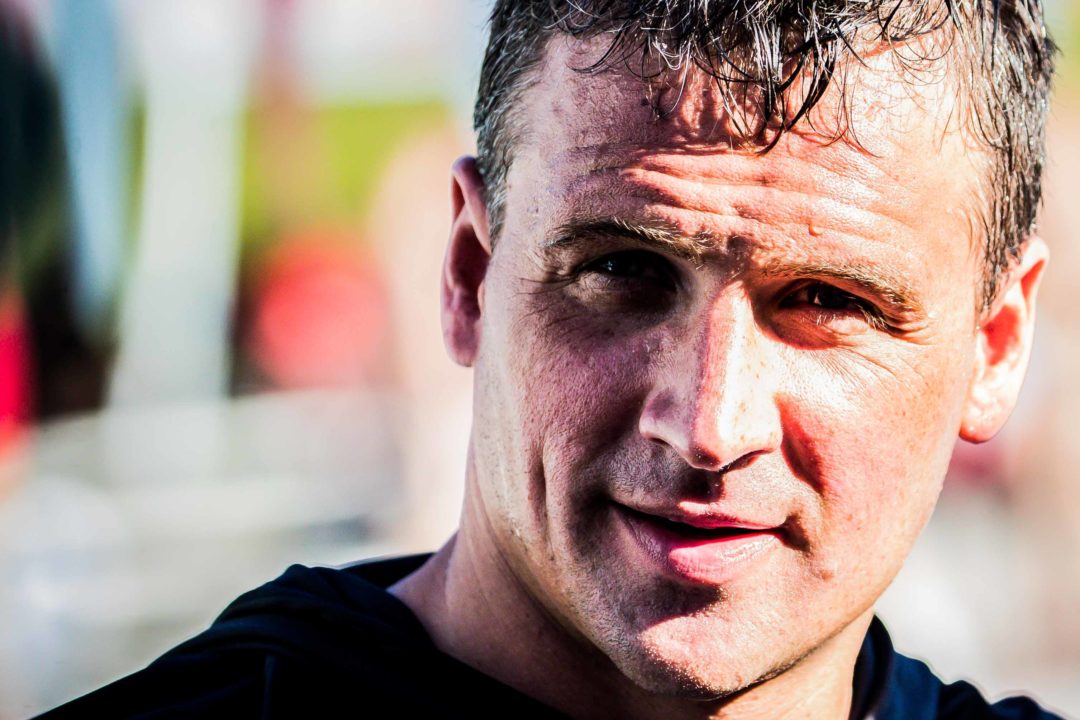 "This is the most pressure I've ever had in my life," Lochte says. "If I don't make the Olympic team, they won't see the change that I've made." Archive photo via Jack Spitser/Spitser Photography

Peacock, the forthcoming streaming service from NBCUniversal, has released the first trailer for the original documentary “In Deep with Ryan Lochte” that will premiere with the services’ launch on July 15.

The documentary chronicles Lochte’s reinvention as a family man, now married with two children, after the post-Rio Olympic Games gas station debacle that made international headlines.

NBC’s description of the documentary

At the 2016 Rio Olympics Ryan Lochte (Celebrity Big Brother, Dancing with the Stars) was at the center of a scandal that has since overshadowed a decorated swimming career that includes 12 Olympic medals. Now a 35-year-old husband and father of two young children, Lochte is hoping for one more chance to make Team USA and prove he’s not the same man he was four years ago.

In Deep with Ryan Lochte is produced by Peacock and NBC Sports Films.

The trailer features sound and footage from the Rio incident, including the voice of Rowdy Gaines explaining what went down. It also includes clips from Lochte’s infamous first foray into television, “What Would Ryan Lochte Do?”, and new interviews and footage of him spending time with his wife and two children.

“I went from making millions to zero,” Lochte, 35, says. “This is the most pressure I’ve ever had in my life. If I don’t make the Olympic team, they won’t see the change that I’ve made.”

Lochte, with 12 Olympic medals, is tied with Jenny Thompson, Dara Torres, and Natalie Coughlin as the second-most awarded Olympic swimmer in history. If he qualified for the Tokyo Olympic Games, which have been pushed from 2020 to 2021, it would be his fifth Olympic Games.

Based on early results last summer in his return from a one-year suspension for a violation of anti-doping rules, Lochte’s best shot at an individual swim is in the 200 IM. His time of 1:57.76 at the U.S. National Championships ranked him 12th in the world and made him the third-best American. With a group of young up-and-coming swimmers like Michael Andrew, Carson Foster, and Shaine Casas all focusing on this 200 IM, though, the extra year could be one year too long for Lochte to earn a top-two spot.

“If I don’t make the team, they won’t see the change that I’ve made.”

Ryan, the changes you needed to make were for you and your family, not the fans and the gossips. Becoming a better person is the important thing, not making the Olympic team. With that said, good luck with everything.

that’s but but something that’s clear is that Lochte cares a lot about his fans and people that look up him. it’s a legacy thing

I have a feeling that the Lochte story may have a sad ending similar to that of many other professional athletes. He made and blew through millions and now has to focus on what he’s going to do after swimming to provide a living for his family. I agree with the other comment in that redemption at this point is for he and his family. The public redemption isn’t going to do much for him at this point.

I don’t know if he is swimming because he wants to at this point. It seems like the only way he can earn a living. He could probabaly get into coaching/being a trainer but it think he’s chasing one possible Olympic payday.

I’m pretty certain he has redemption from his family regardless of making an Olympic Team or not. This is about legacy and being a role model who can come back against all the odds. If that nets him endorsement deals, great for him and his family. But rest assured he’s not trying to earn anything of the sort from the folks who know and love him best.

i love you ryan. #JEAH