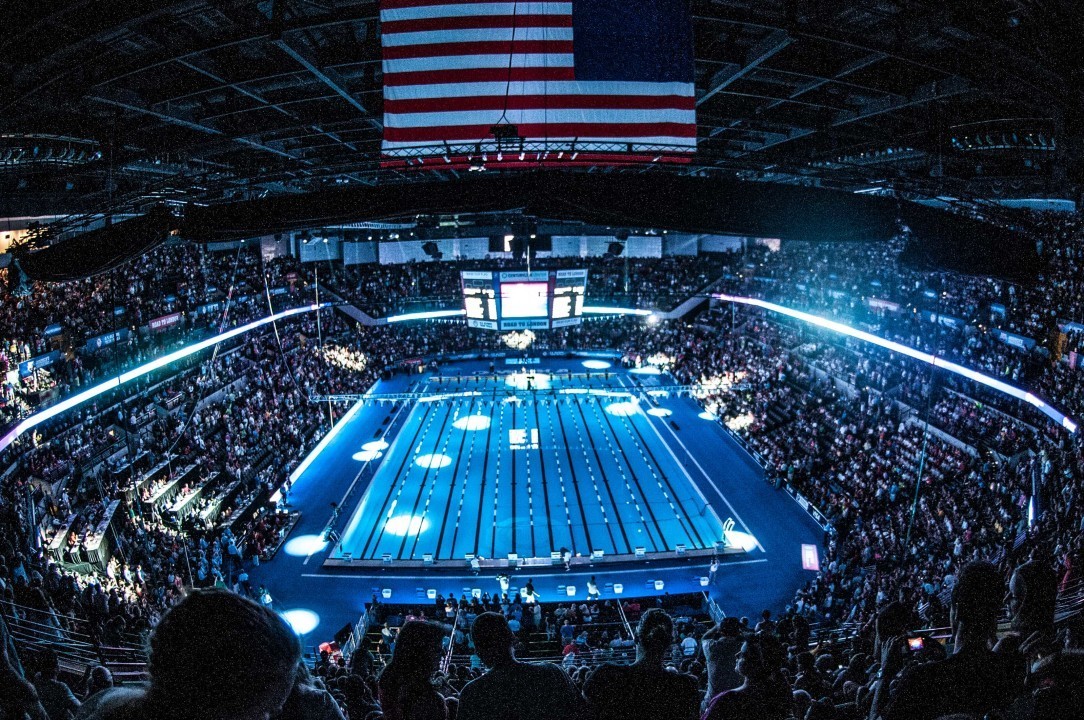 The first drops (and sprays) were cast into the temporary pool at the CenturyLink Center in Omaha, Nebraska, with less... Stock photo via Mike Lewis/Ola Vista Photography

The first drops (and sprays) were cast into the temporary pool at the CenturyLink Center in Omaha, Nebraska, with less than three weeks before the U.S. Olympic Trials – Swimming.

Check out the video below, courtesy of the USA Swimming Facebook page.

Using a hook and ladder fire truck, the pool began filling in preparation for the Olympic Trials.

There have been more than 1600 USA Swimming members who have trained hard and qualified to swim in Omaha at these Trials. More information about Trials qualifiers can be found here. In that vein, the main website for the Trials is here.

This will be the 3rd time that the U.S. Olympic Trials are to be held in Omaha. After they were held in Long Beach, California, in 2004, USA Swimming made the location switch to the CenturyLink Center in Omaha.

According to the USA Swimming website, “In 2008, the Trials were recognized by SportsTravel Magazine as the Best Amateur Multi-Sport or Multi-Discipline Event. The event was nominated for the award again in 2012 and was also a finalist for the Sports Event of the Year by the Sports Business Journal in 2012.”

June 26th will be the first day of competition in Omaha.

how is this the 4th time? Pretty cool how fast the construction went

It says…”This will be the 3rd time that the U.S. Olympic Trials are to be held in Omaha”

Hi jesse – we corrected after Derek caught the error.

Isn’t there a more efficient way to do this? It looks like a lot of that water doesn’t even make it in the pool

It’s just your angle. They are aiming it directly into the center of the pool. It’s not going over to the other side on the deck.

I’d just use my garden hose.

It might fill up by the 26th if you do that.