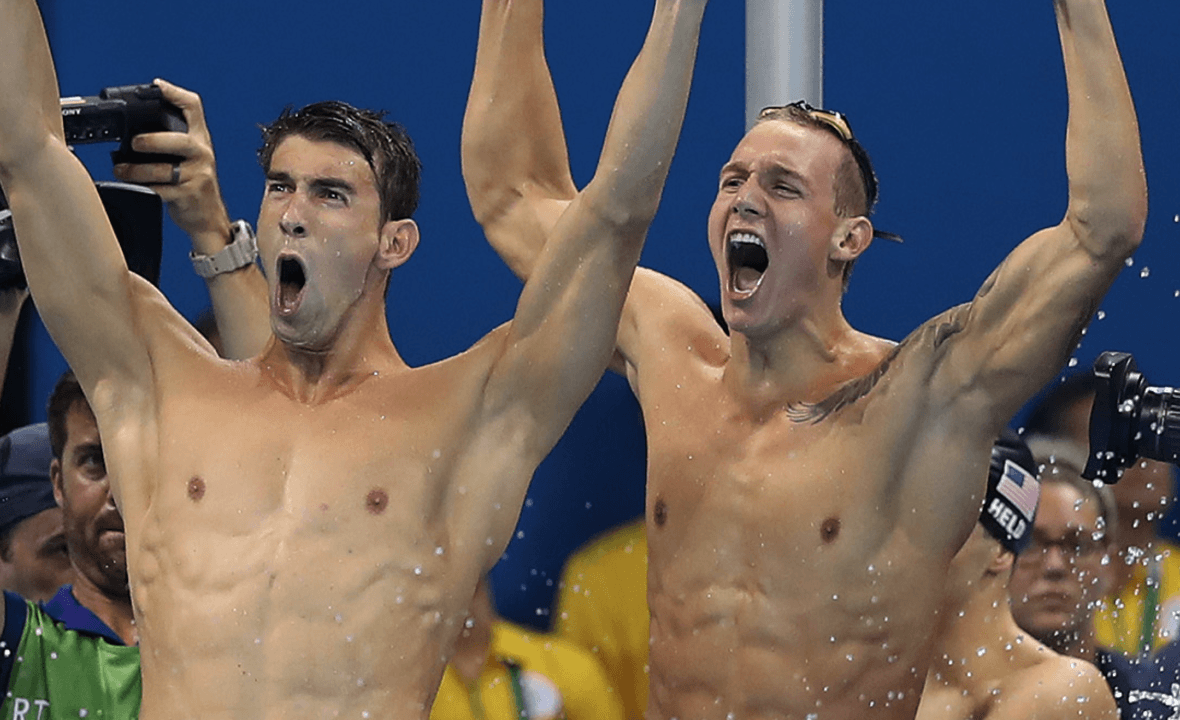 Bob Bowman, Head Coach of the U.S. men's squad and long-time coach of Michael Phelps, called what the 23-time Olympic medalist produced off the wall, 'a serious turn.' Current photo via Simone Castrovillari

To watch the men’s 4×100 freestyle relay, click the links below:

The squad proved to be just the right combination for the stars n’ stripes to hold off the likes of archrival France and ever-present competitor Australia, finally stopping the clock in 3:09.92 to stand atop the podium. The splits for each of the instrumental Americans are below.

Of note for Phelps in particular, the man threw down his fastest split ever. At 31 years of age and the fact that he’s at his 5th Olympic Games speaks to what kind of statement swim the most decorated Olympian of all time threw down last night.

Within that statement swim was a monster turn, one that saw him enter the wall slightly behind France’s Fabien Gilot, but resulted in the ‘GOAT’ well out in front due to his perfectly-timed flip, powerful push and enormous underwater.

Catch Michael Phelps in action today as he swims his first individual event, prelims of the men’s 200m butterfly.

Doesn’t work in Belgium !!! just saying that they blocked the rights to be seen around here

The last turn of the 400 IM finals at 2008 Olympic Trials was his best turn ever.

Wrong that was his best turn ever.

Don’t forget the last turn of the 200 free at the 2008 Olympics, he’s said it himself arguably one of his best races ever

It is even more impressive to see the turn from above the water as was on NBC last night. Anyone have that?

This Phelps maybe could win 200 free if was in the contest. I expect monster time in the relay

Samuel was on fire as well – what a fan

Thanks for the links!

Although, all these regional restrictions are getting so old. Even using a VPN, it still bugs me. NBC – you don’t own me just because I happen to live in a specific location. Offer a good product – and I’ll choose to purchase my feed through you. Offer a poor product, and I’ll choose a competitor.

Ok, rant off. Time to re-watch some relays =)