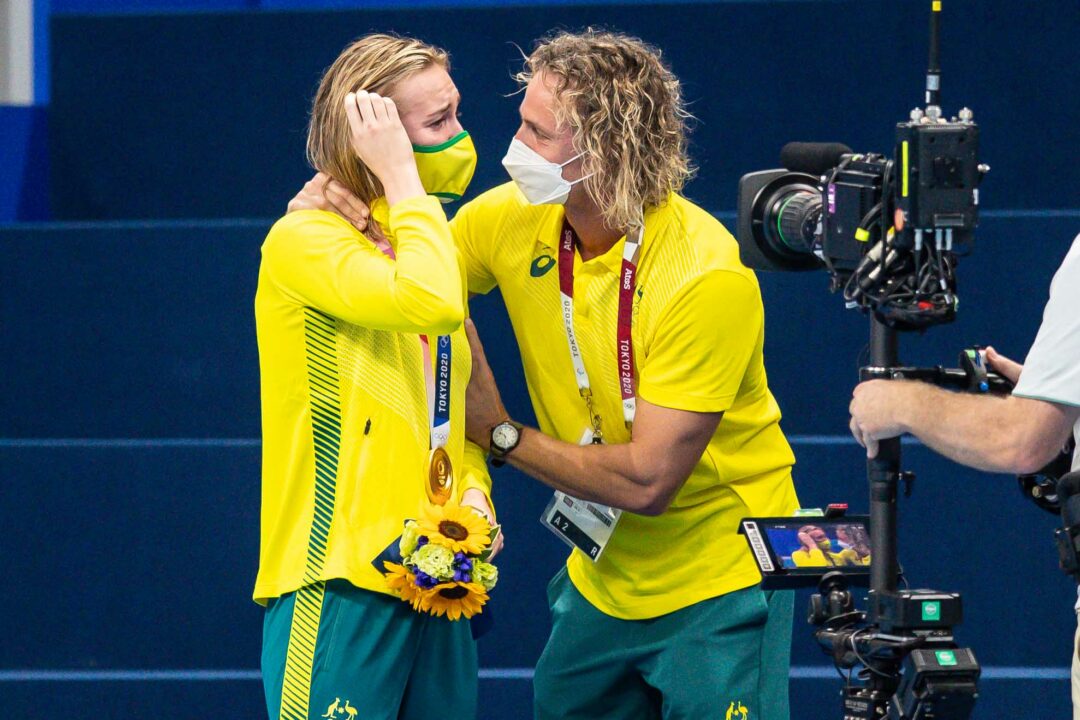 Ariarne Titmus' coach Dean Boxall went viral last summer because of his celebration of Ariarne Titmus' 400 free gold medal. See what he did when she broke the World Record. Archive photo via Jack Spitser/Spitser Photography

Boxall’s celebration in the stands, which included infamous hip thrusts and various gyrations against a railing, went viral around the world with opinions ranging from those who loved it to those who abhorred it.

This week in South Australia at the Australian National Championships then, cameras were fixated on Boxall as Titmus swam the 400 free again.

His celebration was wild. With the freedom to roam the entire side of the pool deck, Boxall chased his swimmer up and down the pool, almost obliterating an official, urging his swimmer on to the finish.

While still carrying the same intensity and animation, Boxall seemed to have less of a pressure release at the finish when he realized his swimmer had broken the record. He was still excited and intense and emotional, but it did feel more under control than last summer in Tokyo.

After last year’s Olympic celebration, Titmus shrugged off the criticism lobbed at her coach.

“That’s just the way Dean is,” she explained. “He’s very passionate about what he does – he really becomes quite animated,” she said at the time.

“This is just as much for him as it is for me,” she said. “He has sacrificed a lot in his family life, his kids and his wife, for his job. He puts 100% into being a swimming coach. I would not be here without him.”

I read this in a recent interview with him…..

“Some people think it’s a job. It’s not a job. A job is you get up and you go, ‘oh I have Mondayitis’. I don’t have Mondayitis, I actually look forward to coming in and seeing the guys, being around them.

I think they’re a great group. I believe in them. They believe in me.”

Why aren’t the orderlies keeping all of these fanatical downvoters out of the rec room? It’s medication time!

He has similar passion and energy as Lawrie Lawrence rip who actually slapped someone nearby after Duncan Amtrong won, beating Anders Holmertz and Biondi.

And that’s a positive? I suppose you feel he ought to get with it and add slapping people to his antics. Disagree that he gets the job done regardless. Could name many swimmers, elite and non-elite, who have not thrived in his system, don’t want to embarrass them by listing names.

His passion is genuine and nothing but good for the sport of swimming.

That passion almost certainly translates to his swimmers… which is a good thing for those of you keeping track at home!

He really is a special one isn’t he.

He is, I don’t understand the hate, imagine having someone like that in your corner, just WOW!!!!

I’d love to have a coach that passionate

For some of us, the first video is quite traumatic and triggers PTSD.

I’m in favor of the policy change at this meet that allows men like him to roam the deck openly, without my kind in the way.

I’ve seen you make similar comments in below other articles too. Quit this sarcastic trolling. This is not Twitter

Oh, thank you for informing everyone you’ve seen multiple comments.

Nope, will continue. Was told comments were for fun. Not familiar with Twitter behavior.

hes got so much needed excitement from coaches that I love to see. over the top? sure… but love it. lol

also that WR really started to catch her! that was intense. I for one am excited she is at this level now, great rivalry in the making.