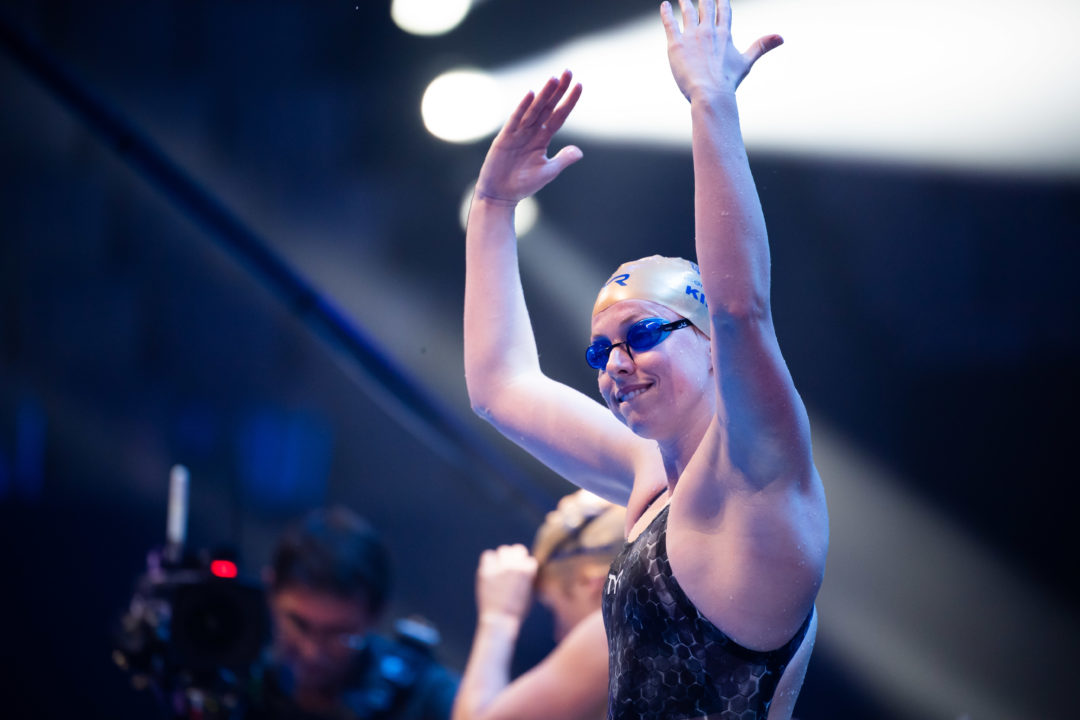 The Cali Condors quartet of Olivia Smoliga, Lilly King, Kelsi Dahlia and Erika Brown combined to set a new world record in the women’s 400 medley relay during the 2020 ISL Finals, producing a time of 3:44.52 to lower the previous mark of 3:45.20 established by the U.S. team at the 2015 Duel in the Pool.

Smoliga led off in 55.60, missing her American Record in the 100 back by just .13 (she would lower it to 55.04 the following day), King unleashed the fastest breaststroke leg in history in 1:02.40, Dahlia uncorked the second-fastest fly split ever in 54.79, and then Brown, as she’s done all season, reliably anchored the team home in 51.73.

While Energy Standard’s winning relays in the women’s 4×100 free, men’s 4×100 free and men’s 4×100 medley also went under the world record, the Condor women’s mark is the only that will hold up due to the fact that all four swimmers represent the same country internationally (USA).

You can read more on the record here.

Watch the race video below:

Question if a team had 4 swimmers from different nations and they swam faster then the world record what would this be called?

I can see this happening in ISL.

It would be called a fast relay

This happened in the other three relays on day 1 of the finals. It’s not any officially maintained record, but it’s often called a WBT (world best time). There are a handful of other relays that fall into this category for different reasons – such as the French 4×50 free relay from the end of ’08, which is the fastest time ever (1:20.7) but not the WR because (I believe I recall) one of the members’ suits wasn’t certified yet.

If the meet is on US soil, it has historically counted as a US Open record. The NCAA had their championship meet in SCM a few times, I think 2000 and 2004, and teams like Auburn would put together ‘international’ relays that made the US Open record way faster than the recognized world record.