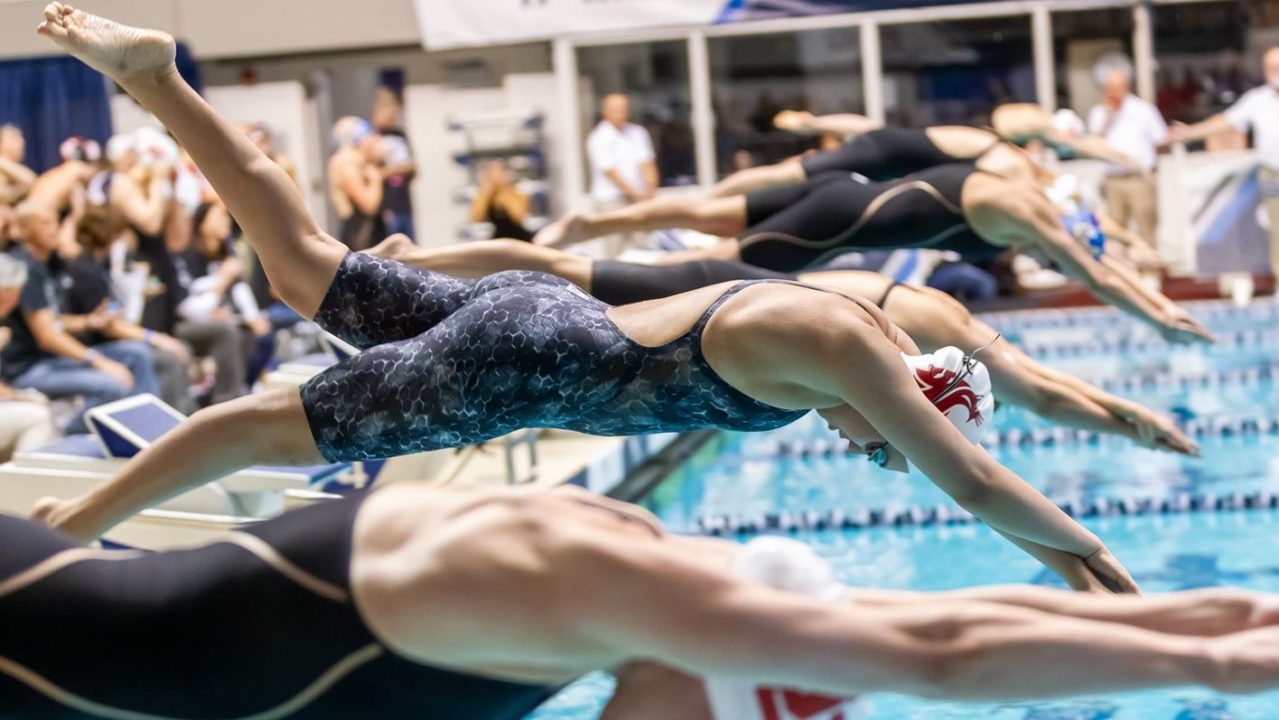 Larson put on a show in the 50 free, finishing in 22.70, well ahead of the runner-up, Woznick, who touched in 23.23. Stock photo via Washington State Athletics

The Utah Utes traveled to Pullman, WA to face off against conference opponent Washington State on Friday, January 15th. The Utes and Cougars each had 7 event wins apiece, but Utah won both relays, giving them an edge. In the process, the Gibb Pool record book was rewritten, with 5 pool records falling. 3 records came at the hands of the Utes, and the other 2 were broken by Washington State swimmers.

After leading off that record-breaking relay, Emma Broome went on to break the pool record in the 100 back. Broome swam a 54.37, edging out teammate Audrey Reimer (54.78). Broome came in .14 seconds under the previous pool record, which was held by Washington State’s Emily Cook from 2018.

Washington State senior Chloe Larson also took part in the record-breaking party. Larson put on a show in the 50 free, finishing in 22.70, well ahead of the runner-up, Woznick, who touched in 23.23. With a personal best of 22.63, Larson nearly posted a personal record. She did, however, blow away the previous pool record in the event, which was a 23.04 from Taylor Ruck during her freshman campaign at Stanford.

Cougar Michee Van Rooyen posted a pair of dominant wins. Van Rooyen kicked off her meet with a 1:50.64 to win the 200 free, getting her hand on the wall first by over 4 seconds. She was also just off her personal best of 1:49.38. In the 500 free, Michee went on to clock a 4:55.54, besting the field by over 8 seconds. She also provided a 51.19 split on the 2nd leg of the Cougar 400 free relay, marking Washington State’s 2nd-fastest split, only behind Larson’s lead-off.

PULLMAN, Wash.- The Utah swim and dive team began the weekend with the women’s swim team breaking three pool records at Washington State en route to defeating the Cougars 140-118 in the first dual meet of the season. Meanwhile in Los Angeles at the UCLA Diving Invitational, Tony Chen continued his winning streak after claiming the 3m title.

Utah’s women’s swim team came up on top in Pullman, beating Washington State in the first team scored dual of the year. The Utes started off the meet by breaking the Gibb Pool record in the 200 medley relay, raced by Emma Broome, Sadie Edwards, Emma Lawless, and Maddie Woznick with a time of 1:41.20. Broome also broke the pool record in the 100 back after finishing with a time of 54.37. The Utes weren’t finished just yet as the 400 free relay team broke another pool record to close out the meet. The Ute 400 free relay team was comprised of Woznick, Kayla Miller, Lawless, and Audrey Reimer (3:24.33).

“Just so proud of the girls and the way they competed tonight” said head coach Joe Dykstra. “We came up here and raced with a shorthanded roster, traveled all day right before the meet, but still managed to put up a few best times and broke three WSU pool records. I couldn’t be prouder of the resiliency of this group.”

Behind Broome’s record time in the 100 back were Reimer (54.78) in second place and Lawless (55.53) in third. Woznick and Miller posted second and third place finishes, respectively, in both the 50 free and 100 free.

For full results from the dual meet between Utah and Washington State, click here (PDF).

The Cougars (2-1) received a pair of wins for Michee Van Rooyen in the 200 Free and 500 Free while Larson posted wins in the 50 Free and 100 Free. Larson, a senior from Rapid City, S.D., put her name atop the Gibb Pool record book with a 22.70 time to win the 50 free, breaking Canadian Olympian Taylor Ruck’s mark she set while competing for Stanford in 2018.

Washington State also received wins from freshman Kiana Swain in the 200 Fly, senior Mackenzie Duarte in the 200 Breast and senior Taylor McCoy in the 200 IM. Van Rooyen and Larson each tied for the meet-high in points scored with (18) while Swain’s win was the eighth-fastest 200 fly time in program-history (2:03.74).

The Cougars will head to Seattle U next Saturday before returning home to host Idaho Jan. 29.