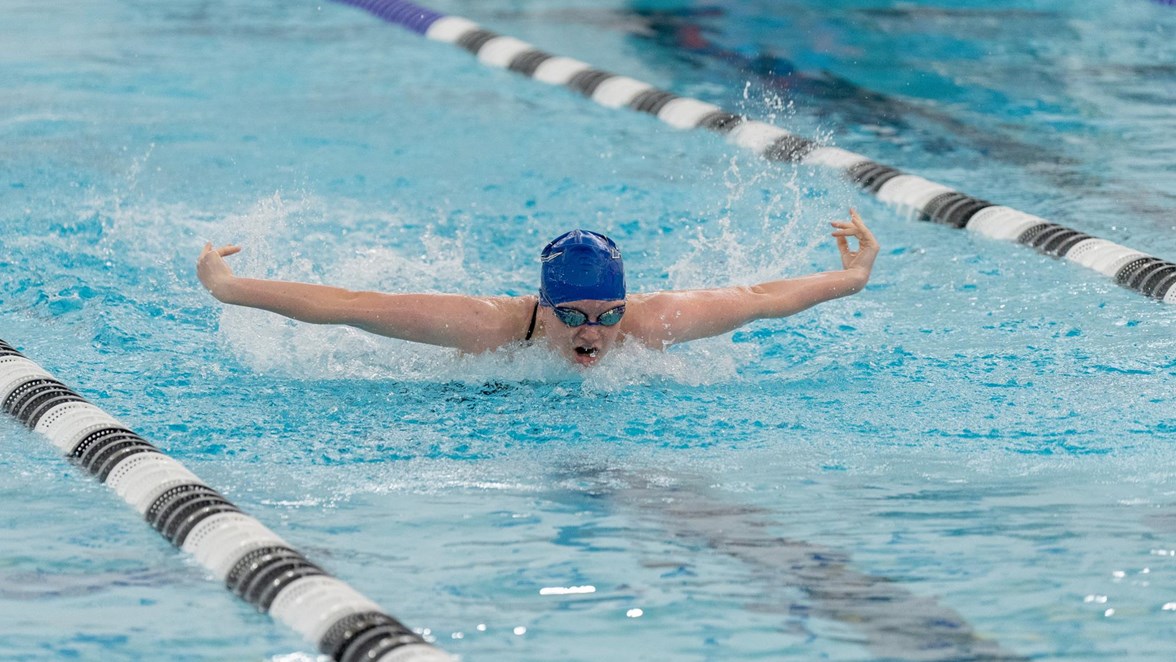 Over the course of the two days, the Bulldogs won 14 of the 26 events, earning a 274.5-207.5 victory in Statesboro. Archive photo via UNC Asheville Athletics

STATESBORO, Ga. – The UNC Asheville swimming and diving team picked up a 274.5-207.5 victory over Georgia Southern on Sunday afternoon. Over the course of the last two days, the Bulldogs won 14 of the 26 events. Highlighting the Sunday’s action was freshman Jade Canady breaking the program’s 3-meter diving record not once but twice with point totals of 198.30 in the prelims and 203.03 in the finals.

“The team did a great job on day two,” said senior Aleta Jewell. “We kept our energy up and encouraged our teammates to perform to the best of our ability. I am really proud of the teams’ accomplishments on the boards and in the water.”

Asheville had success throughout the day with eight event victories. The Bulldogs logged the top spot on eight occasions and finished first and second in three contests.

Much like Saturday, the individual events began with a long-distance swim in the 1000-yard freestyle. The tandem of Kylie Johnson (10:57.04) and Jewell (10:57.40) repeated their finishes from a day ago and placed first and second in the field of five swimmers. Johnson was not through as she also logged the top mark in the 500-yard freestyle, clocking in at 5:18.28.

Like was mentioned earlier, Canady’s attempts led the way for the Bulldog diving team. Canady has set either a new school record or freshman record in each meet she has competed in this season. Senior Megan Almond also set a new personal-best for Asheville notching a point total of 147.45.

Asheville also capped out the weekend by claiming the top time in the 400-yard freestyle relay as the foursome of Bela Stuart, Abby Parks, Jessie Frank, and Carlton clocked in at 3:33.16.

The Bulldogs will be back in the pool next weekend as it hosts Converse next Saturday at the Justice Center Pool at 11 a.m. The meet, which will serve as the team’s senior day, can be watched on ESPN+. Additionally, the team’s senior diving members will be honored at the Jewish Community Center in Asheville at 4 p.m. Friday.

STATESBORO, Ga. – Georgia Southern Swim & Dive competed for the second consecutive day against UNC Asheville. In the second meet of the season, the Eagles had another impressive day of competition, collected four first place finishes and racing very hard against the Bulldogs.

The Eagles 200 Yard Medley Relay team kicked off the afternoon taking home a first place finish. The team of Emma Scruggs, Courtney Niemann, Tori Rucker and Melissa Cox posted a time of 1:48.82 to take home the top spot in the event.

Scruggs continued her successful day in the pool with a second place finish in the 200 Yard Freestyle. Scruggs posted a time of 1:57.26 in the event, while Jessica Ware finished fifth. Melissa Cox added to the list of Eagles that took home a first place finish, with a time of 24.36 in the 50 Yard Freestyle.

Isabelle Bray and Courtney Niemann finished first and second in the 400 Yard IM for the Eagles, posting times of 4:37.66 and 4:40.88. Scruggs added another second place finish in the 100 Yard Backstroke, posting a time of 58.76.

Katie Knight had another great day on the diving board, taking home first place in the 3 Meter Dive Finals with a combined score of 229.43.

QUOTING COACH CALDWELL
“The beginning of the season our women’s had the vision of being “All In” for the year. From midseason on every woman that has been training here has been living that vision. I could not be more proud of this team for the way they stepped up and competed this weekend and the energy they brought both days. Hard to highlight just a few women as everyone really brought it today. We are grateful for the opportunity to race this semester at home. We could not do that without the help of Jared Benko, Brandy Clouse and may other at the RAC. We could not be doing any of this without you all. Thank you!”