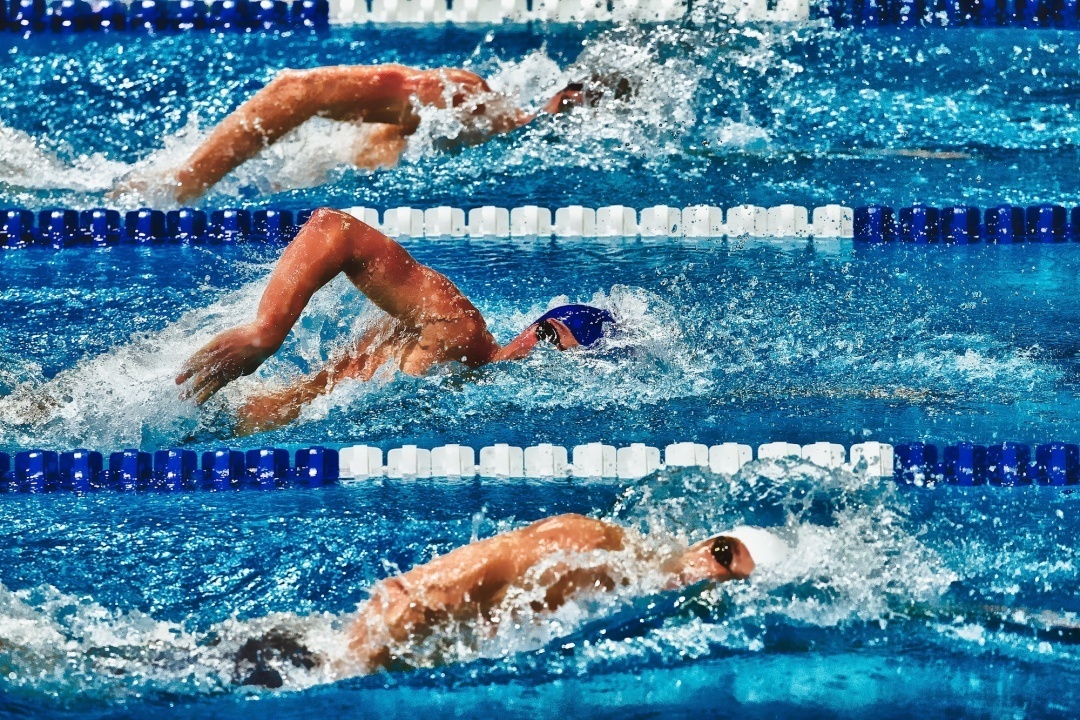 With school starting up many swimmers will be waging the familiar battle of swimming, studying, and also trying to get sleep. Here is why you should make sleep a priority this season. Current photo via Tim Binning/TheSwimPictures.com

Michael Jordan was there. At least I think it was him. Maybe it was Magic. Or Larry.

There was only a few seconds left on the clock, and I was streaking up the side of the court. Without even having to look he lasered over a pass.

I charged down the lane, around two defenders, planted my feet and—

I jolted upright, and looked around.

20 sets of eyes, including those belonging to my 9th grade teacher, were focused on me. Silence for a moment as my eyes adjusted, I wiped the corner of my mouth, and then Mrs. Bell continued her biology lecture.

The top of my knees were stinging, and undoubtedly there were a couple fresh indentations on the bottom of my desk.

During heavy bouts of training there were times that I would nod off sitting up, for fear of putting my head on the desk would arouse the ire of the teacher. I’d doze off in the car from school to practice, and there were even times where I would pass out on the metal bleachers at the pool if I was early.

But jumping while sitting in a desk was certainly new.

How Much Sleep Do Swimmers Need?

Swimmers push themselves hard in the pool. They try to make healthy life decisions when it comes hydration and nutrition. But where many begin to cut corners is on their sleep.

Not getting enough sleep goes beyond just doing the occasional head-bob-and-jerk in class or in public. Or feeling a little groggy and yawning repeatedly while coach writes up a workout on the whiteboard.

At the Stanford Sleep Disorders Clinic and Research Laboratory Cheri Mah has been tracking and studying the sleeping habits of Stanford athletes, among them members of the men’s and women’s swim team, as well as the tennis and basketball teams.

Consistently across all sports she has found that performance, alertness and mood have been positively impacted when athletes invest in an extra 1-2 hours of sleep per night.

In the case of the swimmers, their performance was measured for two weeks using their traditional sleeping patterns, and then again after extending their sleep to 10 hours per night for 6-7 weeks.

Alrighty, so I guess we can safely say that sleep matters. A lot.

Here are some sleep strategies for making rest a part of your success equation this season:

The first step is making sleep a priority.

The life of a swimmer that is in school is a profoundly busy one. Juggling homework and two-a-days is tough stuff. When those assignments start to catch up on us we begin cutting corners on our sleep.

Understanding that getting adequate rest is a priority of your training and recovery is critical. Make sleep a priority by creating a bed-time ritual and by making your room dark and cool.

If you are running on less than optimal amount of sleep, and you have time between your AM and PM practice, take a nap.

Researchers (Waterhouse et al. 2007) found that just a 30 minute nap was enough to increase alertness, decrease sleepiness, and in comparison to the athletes who did not nap following a 4 hour night of rest, improved their sprint performance.

Wake up at the same time every day.

Instead of forcing yourself to go to bed at a specific time — which often only induces sleep-stress (“Okay, okay, if I fall asleep right now I can still get 5.5 hours of sleep…“) wake up at the same time each day.

Do this for a little while and you will find that your body will tell you when it is time to go to bed, instead of you having to force sleep on yourself when you aren’t necessarily primed for it.

Sounds obvious, but I have been guilty of this as well – there is work/homework to be done, and having some coffee or an energy drink is ingested in order to ward off the fatigue and retain some level of focus and concentration.

Depending on your tolerance to caffeine, try to avoid it 4-6 hours before bed.

Don’t freak out about one bad night of sleep.

There will always be nights where you just can’t fall asleep. You are stressed about a big test, a big race, or a big blow-out you had with your boyfriend/girlfriend.

The effects of having one bad night of sleep are fairly limited in terms of straight physical performance; a group of 8 swimmers were tracked after only sleeping for 2.5 hours for 4 consecutive nights (Sinnerton & Reilly, 1992).

Back and grip strength, lung capacity and swimming performance were not affected.

However, the psychological effects were profound; the swimmers experienced increased depression, tension and fatigue. Most notably, while they were performing the same, perceived effort was much higher. In fact, it only took one bad night of sleep to significantly impair  psychomotor function.

Get more carbs to get through the sleep deprived days.

If you need to power your way through a day where you didn’t sleep great the night before, ingest more carbohydrates (Reilly & Edwards, 2007).

Battling fatigue requires extra energy, and those carbs will help you stay functioning at a reasonable level until you can make up the sleep deficit.

I would love to print out your articles but there is not easy way. Can you put this is document form so I can print and post these on my pool deck?

Getting enough sleep is MUCH easier said than done- I think we all realize that. I get 5-7 hours of sleep then wake up for 4:00 practice each morning. Not healthy…

I’m not so lucky on sleep. With school and swimming, I usually get 6.5 hours of sleep. For me, that’s not so great.

Interesting article, but it never says explicitly how much sleep swimmers should get, just that they should extend it a couple hours. So 8 hours? 9? 10?

I started getting the 9 hours of sleep my mind and body needs after watching Anthony Ervin speak to an exercise physiology class at Drury University about sleep & recovery for training. It has completely changed my life personally and professionally. Highly recommend for all active and hardworking swimmers as well as the rest of us!