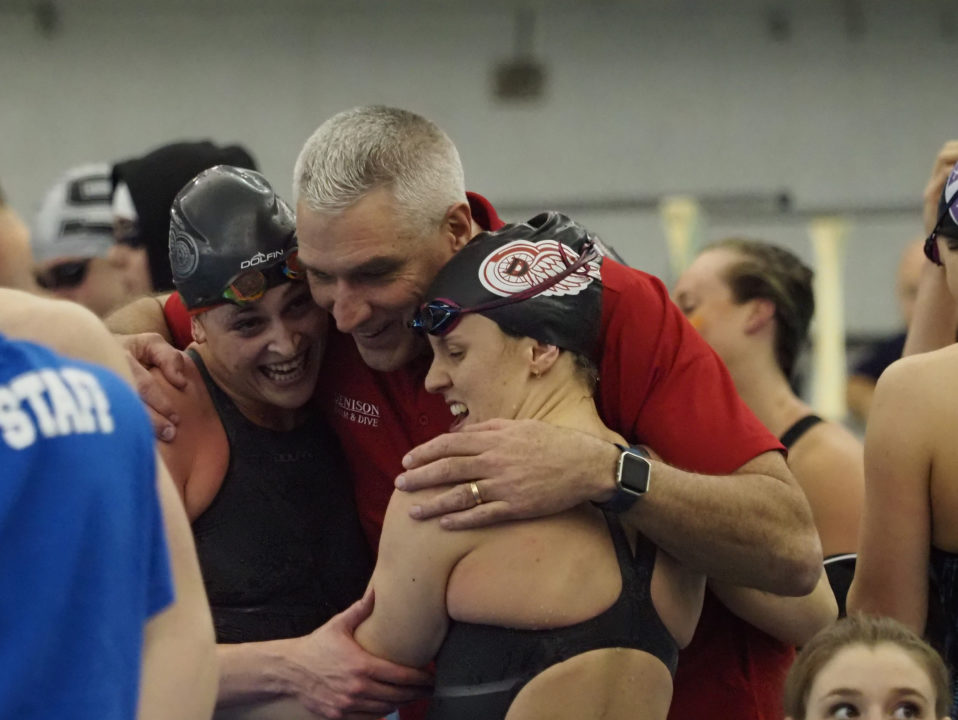 The two seniors received conference honors after competing in dual meets over the weekend. Archive photo via Linda Striggo

At the 2020 UAA Championships, where NYU placed third as a team, Vera would’ve been .02 off of making the 50 free A-final.

Wheaton freshman Anthony Fitzgerald set a school record in the men’s 100-yard breaststroke with a time of 55.56.

Ohio Wesleyan sophomore Grant Spicer (Cincinnati, OH/Lakota East) helped the Battling Bishops to a pair of victories over Wittenberg last week. In Thursday’s 66-53 win, Spicer collected 16 points, while also adding eight rebounds, an assist and a steal. He followed that with 14 points, nine rebounds, a steal and a block in a 58-48 victory on Saturday.

Denison sophomore Mikaila Carpenter (Orrville, OH/Orrville) averaged 14 points and 10 rebounds per game in a pair of wins over Wooster last week. On Friday, Carpenter posted a double-double with 16 points and 11 rebounds, while shooting 8-of-14 from the field and collecting two assists and one steal. On Saturday, she posted 12 points, nine rebounds, three steals and an assist. Carpenter is leading the Big Red in scoring with 13.7 ppg.

Wittenberg sophomore Zeke Bennett (Hilliard, OH/Hilliard Bradley) was part of three victories in Saturday’s dual meet against Ohio Wesleyan. Individually, he broke the tape in the 400-meter dash with a time of 50.63, the fastest time in the conference so far this season. He also ran legs of the Tigers winning 4×200- (1:33.52) and 4×400- (3:26.25) relay teams. The 4×400 relay time is currently the fastest among conference teams this season.

DePauw sophomore Ford Baker (Winnetka, IL/New Trier) won the 5,000-meter run at the Tiger’s tri-meet with Centre and St. Mary’s of the Woods. Baker crossed the line in 15:08.71, beating five other competitors and recording the fastest time among conference athletes so far this season.

Denison freshman Jacob Brown (Dover, MA/Dover-Sherborn) recorded a trio of top-two finishes in Saturday’s dual meet with Wabash. In the triple jump, Brown registered a winning leap of 12.86 meters, while finishing second in the long jump with a mark of 6.07 meters. He also ran a leg of the Big Red’s runner-up 4×400 relay (3:35.36).

Denison sophomore Erin Anderson (Elmhurst, IL/Culver Academies) recorded a trio of top-two finishes in a dual meet against Robert Morris. In the 400-meter dash, Anderson recorded a winning time of 1:01.22, a new personal best and fastest among conference athletes so far this season. She also posted a runner-up finish in the 200-meter dash (28.31) and helped Denison’s 4×400 relay team to a second-place finish (4:26.44).

Wittenberg senior Alexis Gray (Washington Courthouse, OH/Washington Courthouse) posted a pair of victories in Saturday’s dual meet with Ohio Wesleyan. In the mile run, Gray crossed the stripe in 5:14.32, beating out six other competitors while recording the fastest among conference athletes so far this season. She also ran a leg of the Tigers winning 4×400 relay, which combined for a time of 4:17.59.

Ohio Wesleyan senior Ari McPheters (Reynoldsburg, OH/Bishop Hartley) won the women’s shot-put event in Saturday’s dual meet with Wittenberg. McPheters posted a throw of 12.61 meters, the best NCAC mark so far this season. She also finished runner-up in the women’s weight throw, notching a throw of 13.74 meters. Her weight throw mark ranks second-best in the conference so far this season.

DePauw freshman Paige Bennett (Terre Haute, IN/South Vigo) recorded a pair of victories last week for the Tigers. In Saturday’s 7-2 victory over Rose-Hulman, Bennett won at number four singles, 6-0, 6-0, over the Engineers’ Ella Dorfmueller. She also teamed up with junior Erin Friedrich to win at number one doubles, 8-2, over Rose-Hulman.