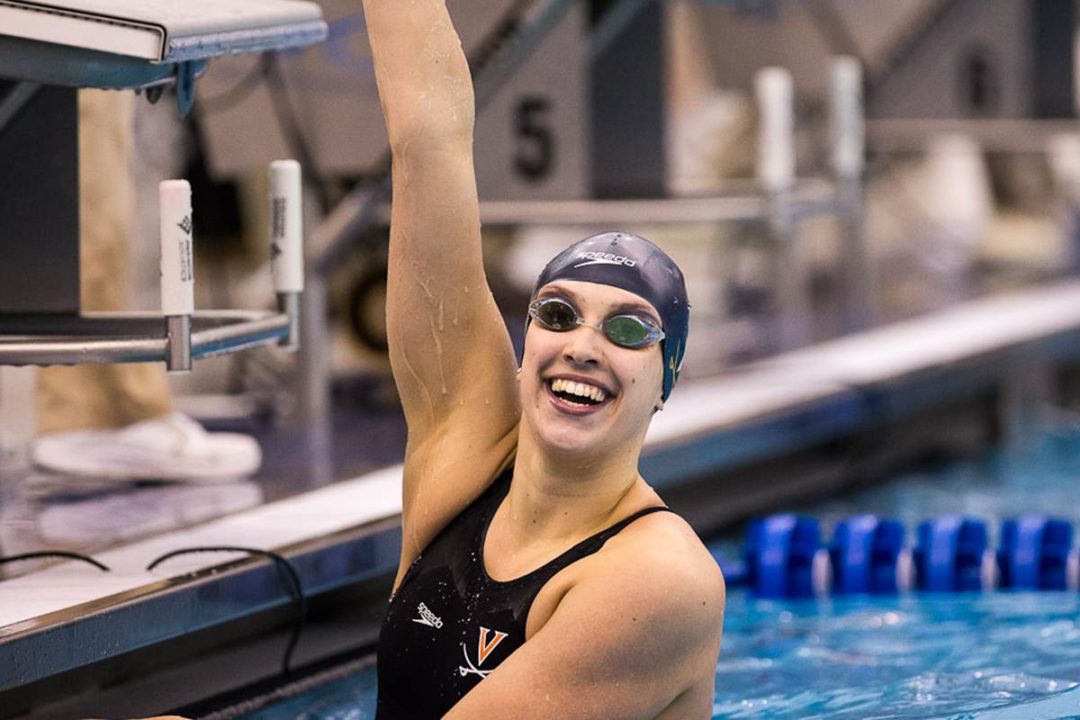 The women of UVA and men of Virginia Tech take the reigns on day one. Archive photo via Tim Binning/TheSwimPictures.com

The Cavaliers opened their 2014 season in winning fashion while competing at a two day quad meet at Virginia Tech.  In addition to the two ACC foes, the Harvard men, Miami women, and Wisconsin program traveled to Blacksburg to race.  Today’s action featured the mile, 200 back, 100 free, 200 breast, 200 fly, 400 medley relay, and the 1 and 3 meter diving events.

Ivy Martin of Wisconsin was able to put the Cavaliers on hold, winning the 100 free in 49.54, a whole second and a half in front of the rest of the field.  The Lady Badgers would get another top three finish from Anna Meinholz in the 200 breast (2:18.54) and Dana Grindall in the 200 fly (2:02.07).  The women of Wisconsin would finish the night on a high note with a win in the 400 free relay (3:21.90), hopefully giving them some momentum going into day two tomorrow.

The Hokies had somewhat of a quiet night, only to make some noise when Weronika Paluszek had the race of the night in the 200 breast.  Battling for the first place finish with Laura Simon of Virginia, Paluszek was able to get to the wall first in 2:14.76, winning by only .03.  Kaylea Arnett was able to add valuable points by placing first in the women’s 1 meter with a score of 318.75.  Miami was even quieter than the rest, only clinging to life by going 2-4 on the women’s 1 meter.

The meet on the men’s side spread the wealth with the first place finishes with all four teams claiming one.  The Cavaliers depth helped keep them afloat through the meet and have them leading three of the four teams at the end of day one.  JB Kolod was able to grab first place on the men’s 3 meter while Luke Papendick battled for second in the 200 back in a time of 1:45.35.  Taylor Grey and David Ingraham picked up third place finishes in the 200 breast (2:01.25) and 200 fly (1:49.90), respectively.

Wisconsin and Harvard held their own with the ACC’s best, both claiming first place finishes.  Drew Teduits out of Wisconsin got his hand on the wall first in the 200 back (1:45.31), touching just .04 ahead of Papendick.  Nick Schafer added to the win total by being the only swimmer to get under two minutes in the 200 breast, winning in a time of 1:59.91.  Harvard was able to sneak away with two wins on the night: the 100 free tie from Griffin Schumacher (44.84) and the 400 free relay (2:59.47).

The racing continues tomorrow with the morning session beginning at 9 AM and the afternoon session commencing at 1:30 PM.