Funk 52.3, Michigan in control after day 1 of SMU Classic 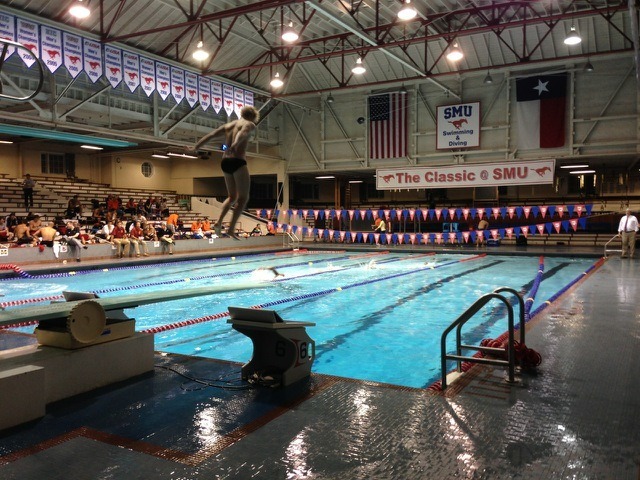 Richard Funk put up the second-fastest 100 breast in the NCAA this season in helping Michigan build a 21-point lead over Florida on day 1. Current photo via Catherine Lee

The Classic at SMU brings together 6 teams with an interesting format twist – each “team” is made up of 8 swimmers and 1 diver. Each event runs an A final and a B final, with each team allowed to enter one swimmer in each final.

This year’s Men’s Classic features a whole host of highly-ranked teams from our most recent power rankings – #3 Florida, #4 Michigan, #6 USC, #10 Louisville, #18 Purdue and the hosting SMU Mustangs round out the 6-team field for the two-day meet, which the Wolverines currently lead by 21.

Michigan opened up day 1 with a 400 medley relay win in 3:07.76. That’s a season-best, about a half-second faster than the Wolverines were at Winter Nationals. This was the same relay on three legs – John Wojciechowski swimming back, Richard Funk on breast, and Bruno Ortiz anchoring with freestyle. This relay swapped out Dylan Bosch, who’s really more of a distance butterflyer, for Pete Brumm.

Florida was second in 3:09.75, about a half-second off a season-best. Louisville took third, just ahead of USC.

Dan Wallace went 3:42.11 to win the 400 IM for Florida, a season-best by .07. That was enough to best Michigan’s Kyle Whitaker in the A final. Whitaker went 3:43.51, and Purdue’s Guillermo Blanco was third in 3:44.32. Wallace’s swim beat Tyler Clary’s old Pool Record, one of a handful of really impressive names who were taken off the board on this night.

Defending NCAA champ Joao de Lucca was on his game again for Louisville, winning the top heat of the 200 free in 1:33.66 – bettering Matt Grevers’ Pool Record. Michigan’s Michael Wynalda took second with a 1:34.18 and USC’s Dimitri Colupaev was third. Cristian Quintero won the B heat for the Trojans with a 1:34.57, beating out Connor Jaeger of Michigan.

The 50 free was a huge showdown and an incredibly tight race between Florida’s Bradley de Borde and Bruno Ortiz of Michigan. Both men got under 20 seconds, with de Borde winning in 19.83 to Ortiz’s 19.89. Santo Condorelli was third for USC, and Trojan freshman Dylan Carter won the B heat with a 20.28.

Marcin Cieslak won the 100 fly for Florida in yet another Gator-Wolverine head-to-head. Cieslak’s 46.73 was enough to beat Dylan Bosch, who went 47.00 for Michigan. Freshman Michael Domagala was 47.97 for USC, just a hundredth ahead of Louisville’s Pedro Coutinho.

A pair of freshmen battled it out for the 100 back win – Grigory Terasevich won for Louisville, going 47.41. Trojan rookie Dylan Carter was just behind in 47.72, and Florida’s Corey Main went 47.85 for third. Michigan took 7th, winning the B final with Pete Brumm. Florida’s Sebastien Rousseau was just behind Brumm for 8th.

It always amazes me how incredibly fast most of these guys go at this meet in that pool at this point in the season.

I’m still trying to determine the most impressive swim/race, and the 400 IM might be it–fast and deep; 5th place was a 3:44–doesn’t that make it back at NCAAs.

They were fully shaved and suited up. They should go fast.

Florida should make it a close meet tomorrow with stroke 200s. Dan Wallace broke the pool record in the 400 IM, and that’s easily the fastest he’s ever been in-season. He went 3:41.9 at SECs last year before going 3:39 at NCAAs. They also got Connor Signorin almost assuredly qualified for NCAAs tonight in that same race with that 3:44.