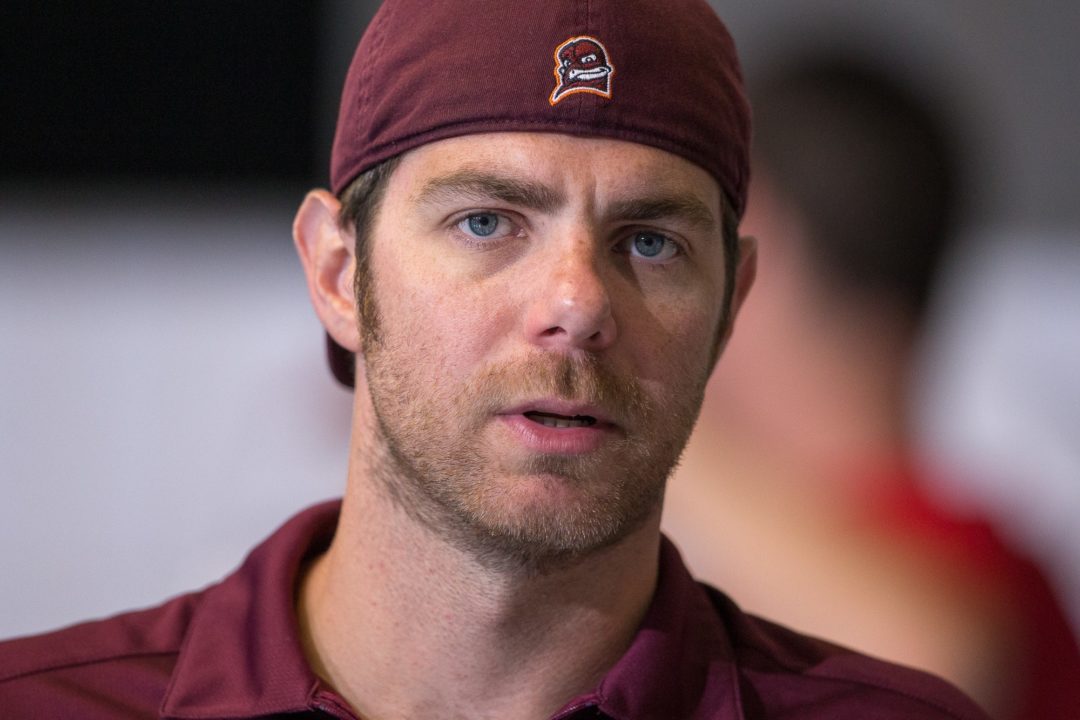 On Friday Night at the Christiansburg Aquatic Center, home of the Virginia Tech Hokies, a tri/quint meet raged, and brought some very interesting early-season results in the ACC. The meet was designated a “breast cancer awareness meet,” so all teams involved donned pink in honor of the cause.

On the women’s side, with five teams, there were 10 meet results, listed below:

The men’s meet saw a huge swing thanks in part to diving points – where in both events the Virginia Tech took five of the top six spots (three of the top four scoring spots). That swung the pendulum in favor of the Hokies for their first win in program history against North Carolina: a noteworthy benchmark for a rising program.

The Hokies set the tone early in this meet with a 3:17.16 to win the men’s 400 medley relay, coming to the wall over two seconds ahead of North Carolina. The big difference-making leg in the race was the butterfly, where junior Morgan Latimer split an astounding 47.26 to take a narrow lead and blow it wide open. Then Owen Burns came home with a 44.61 to JT Stilley’s 44.93 to seal things for the Hokies.

That Virginia Tech medley isn’t a lot of household names, but that relay, very early in the year, is the second-best in the season coming into this weekend. There’s a lot of excitement building about this program.

There is also excitement, though, about the North Carolina men, who took some big shots of their own. Freshman Eugene Tee won the 1000 free in 9:18.63, which included a gutsy finish to pull away from Virginia Tech’s Michael Szuba (9:19.98), who was an NCAA qualifier last year.

The Tar Heels also picked up a win in the next event, with sophomore Logan Heck winning in 20.37, ahead of Virginia Tech sophomore Joe Bonk in 20.47. That’s what was really striking about the men’s version of this meet: there was a ton of youth at the top of the pile for both teams.

Dominik Glavich took the men’s 200 fly title in 1:47.03 – a good result for his first swim back for the Tar Heels after missing last year with injury. Though Latimer well outsplit him in the relay, Glavich won this race, his specialty, by half-a-second ahead of his Virginia Tech rival.

After Virginia Tech ripped the lead back with the diving, the 200 medley relay was up next on the schedule, and this time the Tar Heels took the win. Every relay at this meet seemed to step up bigger-and-bigger as the score continued to stay tight, and again we got a pair of great anchors: Logan Heck for UNC anchoring in 19.90 en route to a 1:29.94 (their entire relay was sophomores) and Bonk for Virginia Tech anchoring in 19.97 en route to a 1:30.21.

Virginia Tech looked like they might start to pull away in the 100 free, the next race, when the freshman Switowski won the 100 free in 45.27 ahead of UNC’s Brad Dillon in 45.57. With a nearly full NCAA schedule at this meet, depth loomed huge at this meet. North Carolina had a chance to salvage this event, but the DQ of Logan Heck prevented that.

In the closest race of the night, Virginia Tech got another win (and three of the top four spots) in the 200 back, led by junior Collin Higgins in 1:47.72. North Carolina only broke that up with a 1:47.73 for 2nd. That’s a good result for the Hokies considering that they graduated their best backstroker, Zach McGinnis, at the end of last season.

Though the meet was out of reach by the time the 400 free relay rolled around, North Carolina had their’s stacked and won in 3:00.23 (roughly what Cal went in their meet against Indiana on the other coast) for the last victory of the meet. Virginia Tech took 2nd in 3:01.28, with Burns again standing tall in 44.39.

The women’s meet had a very different feel than the men’s meet did. The Hokie women did dominate the diving as well, but North Carolina’s team, which is loaded with talented seniors, took the field to task in the lanes.

Liberty’s relay was really interesting. Their backstroker was only a 58.42, but they were right in the thick of the race halfway with a 1:01.64 breaststroke leg from senior Emilie Kaufman. Nobody else in the race was better than 1:04.

Stephanie Peacock topped the 1000 free handily in 9:48; that’s a race in which she’s the NCAA Record holder. This time was about eight seconds slower than what she was going in early October last year, but the closest competitor was 29 seconds back, so she was largely swimming alone.

Hannah Lincoln took the 50 free title in 23.64, with James Madison’s Susanne Gingher taking 2nd in 23.69. Gingher, who had a great taper last year, looks like she’s already feeling the effects of her programs new head coach Richard Long who came over from one of the country’s top sprint programs at Auburn this summer.

The 200 free was all Tar Heels. They took the top four spots in the race, including a trio of 1:48’s from Danielle Siverling (1:48.09), Stephanie Peacock (1:48.24), and Ally Hardesty (1:48.91). The Tar Heels were 14th at NCAA’s last year in the 800 free relay, and only graduated their slowest leg from that relay, and were without Peacock, who missed NCAA’s with an undisclosed health issue. They should be a top-8 relay at this year’s meet.

Liberty’s Kaufman backed-up her breaststroke leg from the medley (which we’ve confirmed is a good split) with a 28.49 to win the 50 breaststroke easily in 28.49. Virginia Tech’s Taylor Ellis was 2nd in 29.28, and James Madison junior Sin Hye Won was 3rd in 29.73. North Carolina’s highest finisher was 4th-place senior Danielle Jansen in 30.02; this team is really good in a lot of places, but will really look for one of their sprint breaststrokers to step up this year and fill what appears to be the team’s biggest void.

Back into the official NCAA championship events, North Carolina was back to their dominant ways. Emma Nunn took the win in 1:59.67, which placed her ahead of North Carolina’s two NCAA A-finalists in the race, seniors Cari Blalock (2:00.80) and Meredith Hoover (2:01.13). UNC has 200 butterfliers in spades, and that will be a big event for them at both the conference and national level. Coming into the weekend, nobody had been faster than Nunn’s time (though Tanja Kylliainen of Louisville was better at their meet on Friday).

I was Liberty that broke through in the women’s 200 medley relay, swimming a 1:42.95 to win by over a second. That included a 28.16 breaststroke split from Kaufman and a 24.84 fly leg from Jess Reinhardt.

Virginia Tech and UNC tied for 2nd in 1:44.25; freshman Taylor Ellis was a 28.92 on their breaststroke leg to pull Virginia Tech ahead, but North Carolina fought back on the last two legs to get the tie.

Again, though North Carolina remained in control of the meet. Peacock won the 500 free in 4:49.75, followed by her teammate Siverling in 4:56.4. Hardesty, who had a great meet overall, won the 100 free in 50.46, followed by her fellow Carolina sophomore Lauren Earp in 51.27. Most of the youth at UNC is wrapped up in those sprinters, and that’s where they’ll see a lot of their buildup in the future come from.

Annie Harrison’s named was called for the first time in the 200 backstroke, which she won in 1:59.82, two seconds better than teammate and runner-up Carly Smith who was a 2:02.0.

Virginia Tech sophomore Weronika Paluszek, the defending ACC Champion in the race, won the 200 breast in 2:16.71. The sprinter Kaufman from Liberty got out to a big lead halfway, held it through the 3rd 50, but Paluszek had an amazing last 50 (splitting 34.89) to take a relatively handy win.