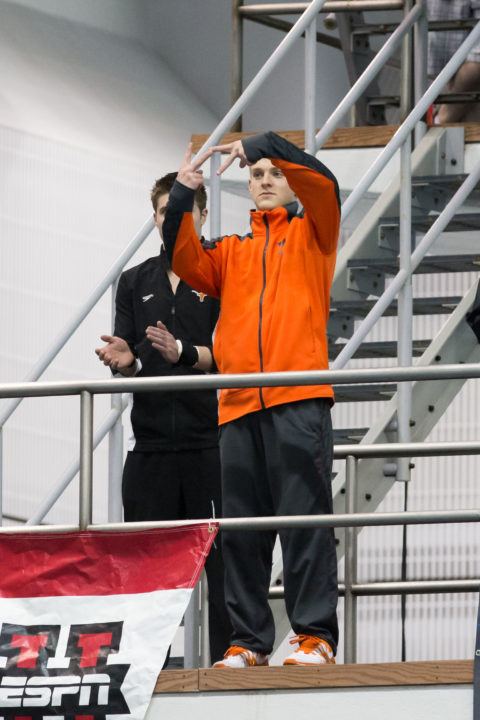 Thanks to Thomas Shinholser and the rest of the Hokie diving crew, Virginia Tech will again hold a lead when swimming begins at the ACC men's championships. Archive photo via Tim Binning/TheSwimPictures.com

After the completion of the men’s diving events at the 2017 ACC Championships, the Virginia Tech Hokies once again hold a big lead on the rest of the field, scoring 194 points. While this is a familiar position for the men’s team, the margin isn’t nearly as big as its been in the past – last year, they were almost 100 points ahead before the swimming begins, while this year, they’ve only got a 41-point lead.

The Florida State men put up a big performance on the platform with 2 divers, Dylan Grisell and Aidan Faminoff, qualifying for the A-final, part of a 66-point run for the Seminoles in the final diving discipline. While Florida State is still unlikely to contend for the team title, their swimming group is expected to be better than last year, and will be boosted by the big diving output.

NC State wandered into unfamiliar territory when freshman James Brady finished 7th on the platform. Last year, NC State didn’t score a single diving point, and while that side of the program is still building, they don’t have nearly the same deficit to make up as they have in seasons past.

Miami’s David Dinsmore won the platform event in a new pool record of 517.65 at the Georgia Tech Aquatic Center. Miami will still (probably) finish in last place thanks to not entering a single relay, but their point total was 16 points higher this year than last year.

The men’s championship meet will be beginning on February 27th at the Georgia Tech Aquatic Center.

The ACC (along with, notably, the Pac-12) have separate competitions for swimming, but combined competitions for diving. That is to say, while the ACC men won’t swim for 2 week still, their divers are in Atlanta this week competing in conjunction with the women’s meet. That means that early team scores are already available for the men’s competition.

The diving scores have to be taken with some perspective, in that some teams have 4 or more divers entered (UNC, Virginia Tech); some have 3 divers entered (Duke, Georgia Tech); and some have 2 (Virginia and NC State) (or even fewer). That’s important, because these diving spots count against the team’s roster total and for some teams reduce the number of scoring swimmers they can have on their roster. Each diver counts as 1/2 of a roster spot, regardless of how many events they compete in.

It would be nice to see how the Women’s ACC meet would have ended without diving. How much did diving affect overall team scores?

ACCFan – that comparison wouldn’t be apples to apples. If a school has spent 2 scholarships and 5 ACC roster spots on diving, because those are the rules of the game, a comparison to a school who has spent all of their scholarships on swimming and 0 ACC roster sports on diving wouldn’t be meaningful or answer the question you’re hoping to answer, especially when C finals are scored.

I’m thinking that I was wondering what just the team scores would be with no diving in consideration? Just the swim scores?

You can certainly do that on your own if you are curious… Here are the steps to do so:
1. Go to the official meet results
2. Take a look at diving results
3. Take away diving scores