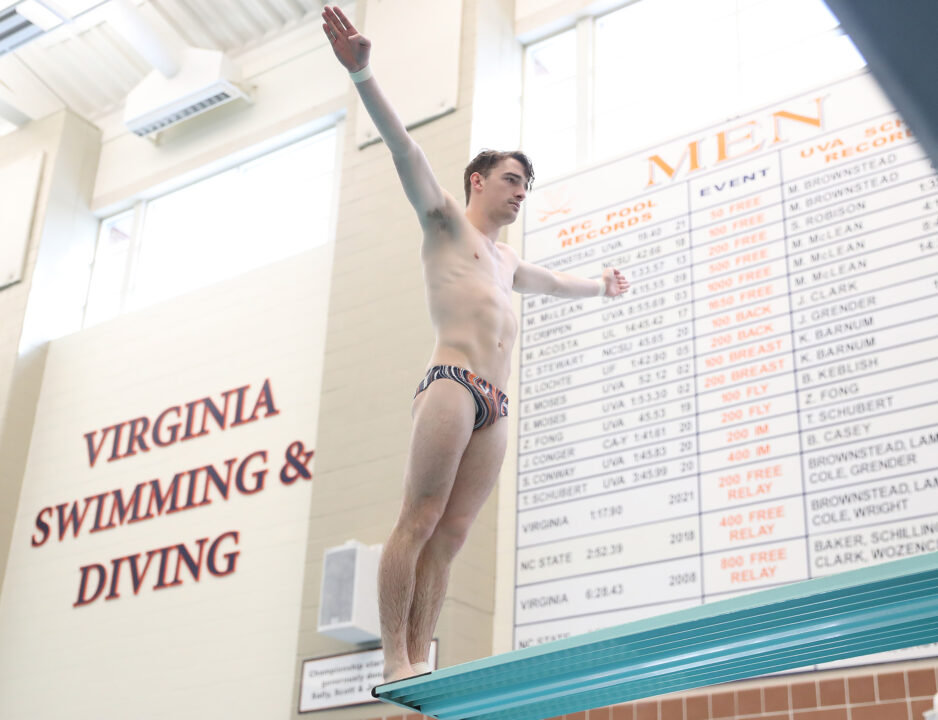 Arndt joins the Cavaliers after serving as the head diving coach at UConn for the past three seasons. Archive photo via Matt Riley – UVA Communications

“We are excited to welcome Josh to our coaching staff,” DeSorbo said. “He is one of the brightest up-and-coming young diving coaches in the country. We are looking forward to supporting him and bringing our diving program to the next level. Josh has had success at all levels, as an athlete as well as a coach, and we know he is going to do some amazing things with our diving program here.”

Arndt joins the Cavaliers after serving as the head diving coach at UConn for the past three seasons. He was named Big East Women’s Diving Coach of the Year two of his three seasons at UConn. In 2021-22, he guided Julia Pioso to conference titles in the 1-meter and 3-meter dives and the Big East Women’s Diver of the Year. He coached UConn’s Elizabeth Drab to the 3-meter diving title and runner-up in the 1-meter at the 2020-21 Big East Championships to earn Most Outstanding Women’s Diver.

Arndt takes over after the departure of former UVA diving coach Drew Livingston to LSU.

During Livingston’s four seasons at Virginia, the team improved substantially in springboard performance, and the Cavalier women set new school records in all three events under his watch. He also qualified 8 divers to the NCAA Championships.

“I couldn’t be more excited to join the UVA swimming & diving staff,” Arndt said. “The passion for this program that everyone has is clear, and the standard that the staff, team and university operate at is beyond impressive. I’m looking forward to getting to Charlottesville and the opportunity to be a part of this program’s continued excellence.”

Prior to his time at UConn, Arndt spent two years with UMass as the head diving coach. Both seasons he was in Amherst, Arndt took home Atlantic 10 Women’s Diving Coach of the Year honors while sending a qualifier to the NCAA’s. His diver’s produced two school records, one Atlantic 10 Conference record and took home four Atlantic 10 Championships.

Arndt graduated from one of the top diving schools in the country, Indiana University, in 2017. While diving as a Hoosier, he earned All-American status in 2016 with a fourth-place finish in the 3-meter and was a 2016 Olympic Trails Diving Qualifier. He secured sixth place in the 2015 USA Diving Nationals 1-meter event and was a two-time US National Championship finalist.