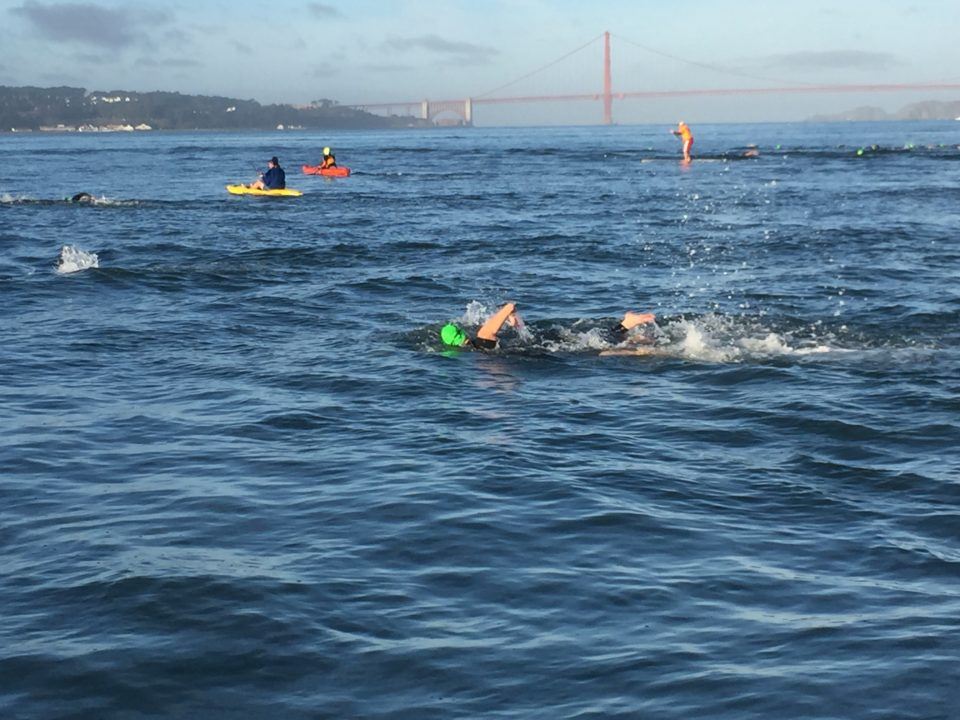 Video highlights courtesy of The Foundation For A Better Life, video edit courtesy of Coleman Hodges: The following is a press... Current photo via The Factory Agency

Video highlights courtesy of The Foundation For A Better Life, video edit courtesy of Coleman Hodges:

The following is a press release courtesy of The Factory Agency:

OCTOBER 23, 2016 – Just a month after winning three gold medals and breaking a 30-year-old world record at the 2016 Paralympic Games in Rio Brad Snyder, a Navy veteran who was blinded while serving in Afghanistan, completed a 2-mile open water swim from Alcatraz to the San Francisco Bay. Snyder, who swam with guide, Jill Dahle, participated with about 100 other swimmers to raise awareness for vision research.

Snyder has not slowed down one bit since the Games. He has co-written a book called Fire In My Eyes which was published in September, visited The White House, and was honored by the U.S. Olympic Committee as Team USA’s Best Male Paralympic Athlete from the Games in Rio.

The 5th Annual Alcatraz Swim For Sight event was especially exciting for Snyder since it is a cause dear to his heart. All of the proceeds from this event support vision research. More than 10 million Americans suffer vision loss from incurable eye diseases such as retinitis pigmentosa, Usher syndrome and macular degeneration.

“The whole idea is to raise awareness of visual impairments,” Snyder told SwimSwam in an interview before the event. “While my blindness isn’t curable, I can speak to the struggles visually impaired people face.”

“We were thrilled to have Brad participate in this year’s swim,” said Lorie Hirson, co-founder of Alcatraz Swim for Sight and who is going blind from retinitis pigmentosa.  “Brad is a true inspiration and helped us motivate swimmers to reach our fundraising goal of $150,000, which means the event has raised a total of $500,000 in five years to support vision research at University of California, San Francisco’s Department of Ophthalmology.”

For Snyder, this was a great opportunity to literally test the waters for possible triathlon events down the road. He enjoyed everything about participating in this event, including riding aboard a Zodiac boat to the start of the event – something that he has not done since his days in the Navy.

For more information about this event, click here: http://thatmanmaysee.org/Alcatraz/

About The Factory Agency

About Alcatraz Swim for Sight

Alcatraz Swim for Sight was started in 2012 by husband and wife duo, Lorie and Ron Hirson, to raise awareness and funds to eliminate eye disease and blindness worldwide. The event has grown into a coveted, community-based swim that attracts awe-inspiring men and women fighting to live in a world where they will one day see again.  All proceeds from the Alcatraz Swim for Sight benefit That Man May See, the support foundation of UCSF Ophthalmology Department.  After the 5th Annual Alcatraz Swim for Sight, the event will have raised $500,000 supporting vision research at UCSF to save and restore sight.  (http://thatmanmaysee.org/Alcatraz/)

About That Man May See (TMMS)

That Man May See was founded as a 501(c)(3) public charity more than 40 years ago.  Contributions to TMMS help to eliminate eye diseases and blindness; attract and retain world-class clinicians and researchers; ensure the finest education for future ophthalmologists at the University of California, San Francisco; and increase public understanding of eye health.  The foundation focuses its fundraising efforts on patient care, research, education and community service. (http://thatmanmaysee.org)

Photos courtesy of The Factory Agency: