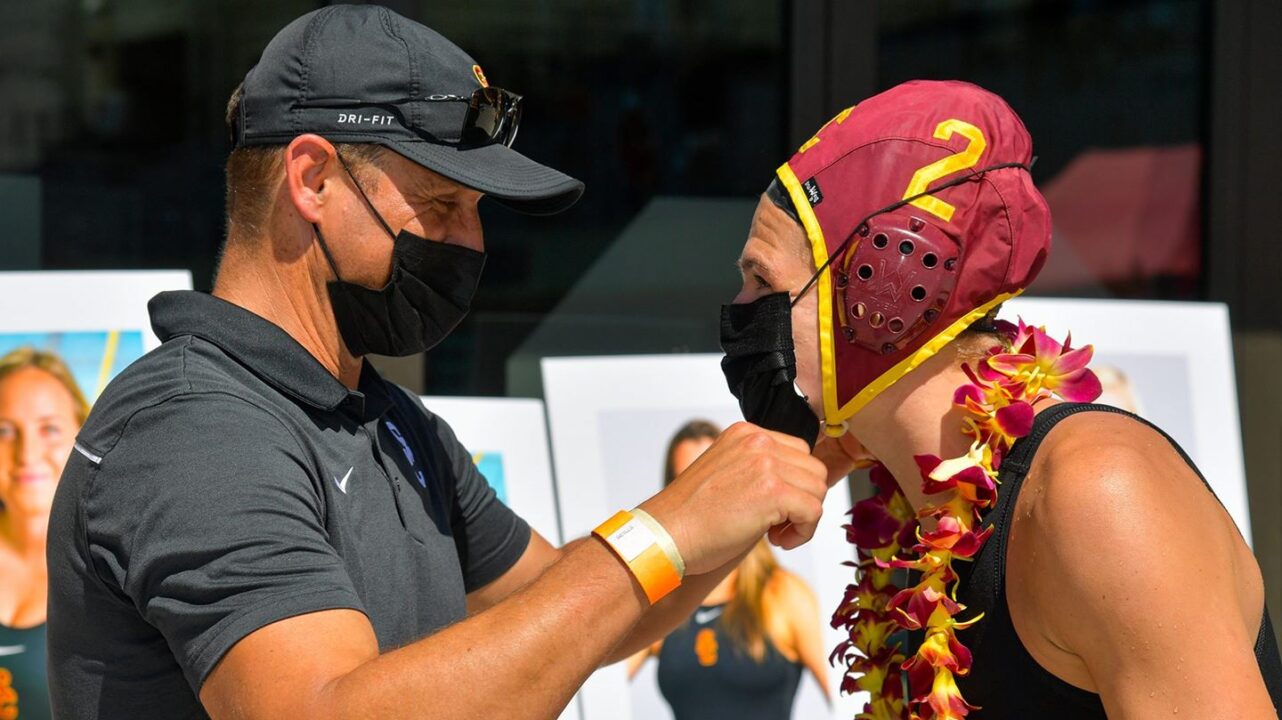 Maud Megens was named the ACWPC Division I Player of the Year, while USC head coach Marko Pintaric takes accolades as the Division I Coach of the Year. Archive photo via John McGillen

Maud Megens of 2021 National Collegiate Athletic Association (NCAA) Champion the University of Southern California leads the team as the ACWPC Division I Player of the Year, while USC head coach Marko Pintaric takes accolades as the Division I Coach of the Year.  The awards mark the inaugural Player and Coach of the Years honors since the conclusion of the 2019 season as the accolades were not presented following the COVID-19 pandemic abbreviated 2020 season.

The ACWPC All-America teams are selected based on nominations and voting by the head coaches of each varsity program.

Since 2005, the mission of the ACWPC is to promote the development and advancement of collegiate water polo.  This shall be accomplished by providing its membership with professional education, services, training and a united voice.

After a record-setting win in the 2021 NCAA Championship game, the USC women’s water polo team has matched its record of eight All-Americans on the Association of Collegiate Water Polo Coaches honor roll while also sweeping the top honors of National Coach and Player of the Year. It is the fifth sweep for USC and the first under head coach Marko Pintaric, who has his first National Coach of the Year award while Maud Megens secures her first National Player of the Year selection, becoming the fifth Trojan to earn that honor. Now a four-time All-American, Megens is joined on the All-America First Team by fellow seniors Denise Mammolito and Holly Parker. Junior Bayley Weber has Second Team status, and senior Kelsey McIntosh is a Third Team pick. And earning All-America Honorable Mention are Verica Bakoc, Mireia Guiral and Grace Tehaney.
In his second year at the helm of the USC water polo program, head coach Marko Pintaric guided the Trojans to their seventh national championship in this 2021 journey to the title. USC had been No. 1 in the nation when competition was brought to a halt in 2020 due to the coronavirus pandemic, and Pintaric helped keep his Trojans on track in 2021. USC was the nation’s top team throughout, accumulating a 22-1 overall record that was capped off by a dominant 18-9 win over rival UCLA in the NCAA championship game. That win not only avenged USC’s only loss of the year, it marked the most goals scored and largest margin of victory in an NCAA title. USC’s 18 goals also was the most the Trojans have ever scored against the Bruins. In all, Pintaric’s 2021 NCAA Champions averaged 12.7 goals per game and gave up just 7.2 per game.
Redshirt senior Maud Megens scored six of those 18 goals for USC in the final, a fitting finish to her Trojan career as she now looks to lead the Dutch National Team into the Tokyo Olympic Games. With her 50 goals scored  in 2021, Megens wraps her time at Troy ranked No. 6 all-time in scoring with 213 career goals. Just the fifth Trojan to be named ACWPC National Player of the Year, Megens is now a four-time All-American with First Team honors in 2018, 2019 and 2021 and a Second Team selection in her freshman 2017 season. Megens also was named MPSF Player of the Year and NCAA and MPSF Tournament MVP in  2021.
Another four-time All-American, super senior Denise Mammolito now has her second First Team pick to go along with Honorable Mention earned in 2018 and 2019. This 2021 season was her fifth with the Trojans, as the captain had her eligibility extended with the cancellation of 2020 competition. Her fifth year at USC was arguably her best, as she was USC’s top scorer with 51 goals and led the team with 13 multiple-goal outings, including a seven-goal outburst in an overtime win over Stanford. With this year’s efforts, Mammolito cracked the USC’s career top-10, ranked No. 10 with 174 career goals as a Trojan.
Redshirt senior goalie Holly Parker packed a serious punch in the cage for the Trojans in her final season, averaging 8.4 saves per game and recording five games with 10 or more saves . She capped off her USC career by setting a new career high for herself with 13 saves in the NCAA Championship game. An All-America Honorable Mention pick in 2020, Parker’s performances in 2021 locked her in with First Team honors as the top goalie in the nation. She rounds out her time at Troy as USC’s No. 8 all-time goalie with her 307 career saves. Parker joins the ranks of five other USC goalies to earn All-America First Team accolades: Amanda Longan, Flora Bolonyai, Tumua Anae, Kelly Graff and Bernice Orwig — all also national champions.
A junior, Bayley Weber punched up 14 goals during USC’s postseason push to MPSF and NCAA titles and finished with a personal best 35 on the year to help her to All-America Second Team status this season. It’s her second such selection and goes along with this year’s All-MPSF Honorable Mention. Weber was one of USC’s leaders in drawing exclusions as well as in field blocks.
Super senior captain Kelsey McIntosh returned for her fifth year as a Trojan and generated 20 goals while fighting through injury. A savvy provider of assists as well, McIntosh wraps her USC career as a three-time All-American with this year’s Third Team honor. She was an Honorable Mention recipient in 2019 and earned First Team status in 2020. Her career scoring tally pulled her into the record books this seas as she finishes up ranked No. 22 all-time with 123 career goals.
Among USC’s trio of All-America Honorable Mention recipients, senior Verica Bakoc has claimed the first All-America status of her career after emerging as USC’s third leading scorer in 2021. She nailed 43 goals — more than her freshman, sophomore and junior seasons combined — including nine scored during the NCAA Tournament. Bakoc topped out with a career-high seven goals in a win at Cal and wound up second on the team with 12 multiple-goal efforts this year.
Juniors Mireia Guiral and Grace Tehaney are getting to be regulars on the All-America honor roll now. Both have added 2021 Honorable Mention status to their resumes after again proving integral to the USC gameplay. Guiral now has her second Honorable Mention accolades, and Tehaney adds this year’s honor to her Third Team selection as a sophomore. A force a two-meters, Guiral earned countless exclusions for the Trojans while scoring 24 goals in her junior season. A crafty lefty, Tehaney tallied 34 goals in 2021, having also matched her career high of five goals scored in a win over San José State this year.
USC also planted eight Trojans on All-America lists after its runs to the 2004 and 2010 NCAA titles.
USC’S 2021 ACWPC ALL-AMERICANS
National Player of the Year
Maud Megens
National Coach of the Year
Marko Pintaric
All-America First Team
Denise Mammolito
Maud Megens
Holly Parker
All-America Second Team
Bayley Weber
All-America Third Team
Kelsey McIntosh
All-America Honorable Mention
Verica Bakoc
Mireia Guiral
Grace Tehaney

Pintaric was Jovan Vavic’s protege and hand-picked successor who had to step in after Vavic’s sudden departure following the Varsity Blues scandal. It’s always a challenge to follow a coaching legend and produce a similar level of results. Ask UCLA basketball fans what happened after John Wooden retired.
Perhaps Pentaric’s best coaching was not with the USC women whose roster is loaded with elite level American and International players including a number of red shirt seniors. That would allow Pintaric just to “out-talent” competitors. It was with the USC Men who started the season #1 assuming supers Vavic, Daube and Molthen would be on the squad. But once they left to go to Europe with the USA WP Senior… Read more »