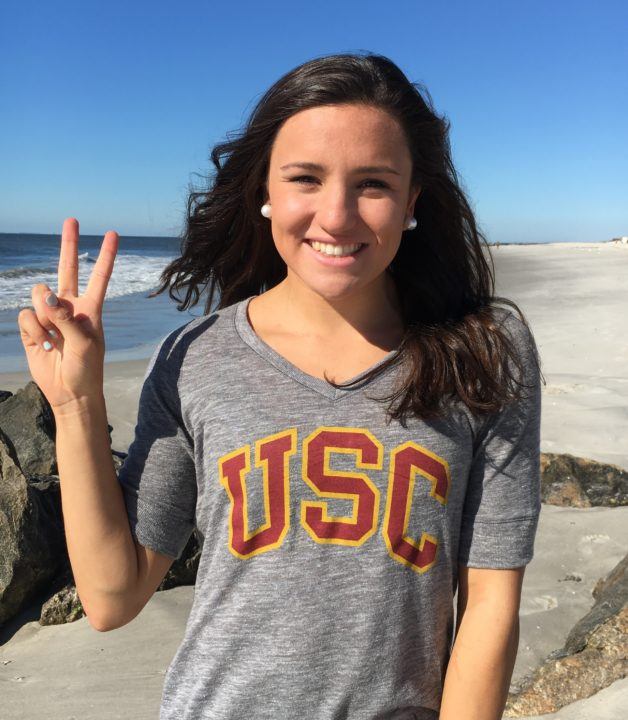 Maggie Aroesty, the number 3 recruit on our top-20 list for the high school class of 2017, has made a verbal commitment to swim for the University of Southern California beginning next fall.

“I chose USC because I know I will have the best opportunity to grow in the classroom, in the pool and as a person. I’m so excited to become a Trojan. Fight On!”

Aroesty is the national age group record-holder in the 100 yard breaststroke for 15-16 girls; she has the distinction of being the youngest American woman in history to break 59 seconds with her 58.98 NAG. She is a senior at Long Beach Senior High School in Long Beach, New York, and trains year-round with Long Island Aquatic Club. A member of the U.S. National Junior Team for 2016-17 (100 breast/200 IM/400 IM), Aroesty represented Team USA at the 2016 Junior Pan Pacific Championships in Maui in August, where she swam lifetime-bests in the 100 breast, 200 IM, and 400 IM.

Aroesty is a big pick-up for the Trojans. She will join a breaststroke group that includes now-sophomores Riley Scott and Kirsten Vose. Aroesty’s 100 breast time would already score in the A final at NCAAs, and she’s not far away from scoring in the 200 breast and 200 IM. She will also impact the Trojans’ standing in the Pac-12 Championships, which they won last year for the first time in program history. USC has also received a verbal commitment from Nation’s Capital Swim Club’s Isabella Rongione for 2017-18.

Been watching her swim for 5 years. An incredibly impressive competitor, who hates to lose. The Trojans captured a gem.