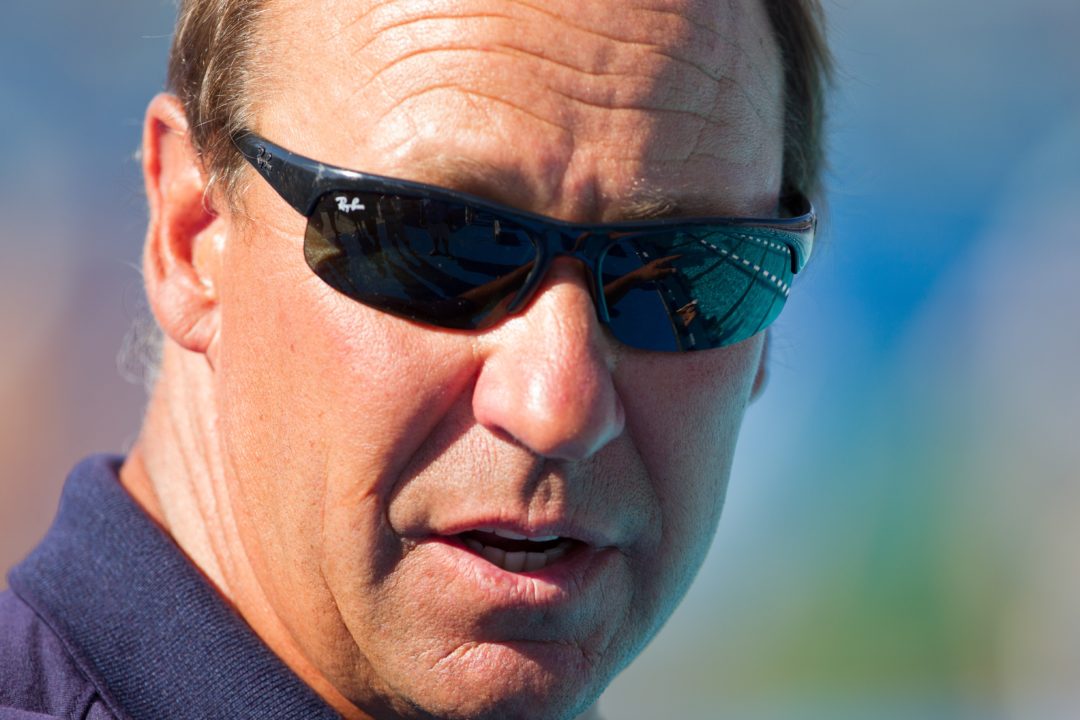 USC's Kendyl Stewart split a 22.8 on the fly leg of the Trojans' medley relay as they posted the fastest time in the country this season. Current photo via Tim Binning/TheSwimPictures.com

The USC vs. UCLA dual meet started off as a rather heated cross-town affair, with the host Bruins actually leading USC going into first diving break by four points.

By the end of the meet, though, both teams were wearing racing suits, and the Trojans swam their way to safety with a 165-135 margin. Almost every Pool Record was broken in the process.

Things started off well for both teams, with both A relays breaking the Spieker Aquatics Center pool record in the 200 yard medley relay. USC’s combination of Henriette Stenkvist, Kasey Carlson, Kendyl Stewart, and Kasia Wilk (that’s three sophomores and the senior Carlson) winning in 1:36.29. UCLA took 2nd in 1:38.38.

That relay was actually USC’s fastest of the season, and the fastest in the country so far this season. That’s despite using a different lineup than they’ve used all year, shifting Stewart to the fly leg and using Stenkvist on the backstroke leg. While they still gave up quite a bit of ground to UCLA and their backstroker Linnea Mack on that leg, an amazing 22.88 fly split from Stewart more-than-made-up for that.

UCLA took the 1st and 2nd place positions in the 1000 yard freestyles with a 9:42.97 from senior Lauren Baker and a 9:46.23 from sophomore Katy Campbell, both of which were under the old Pool Record. That swim from Baker pushes her into the 8th-best in the country this season.

UCLA pushed their lead further with a win in the 200 free from their best swimmer Ting Quah. She swam a 1:46.11 that broke Lindsey DePaul’s Pool Record, and was also the fastest time in the history of the UCLA – USC series. Kendyl Stewart took 2nd in 1:47.12, but UCLA earned 3 of the top 4 spots in that event.

USC got back into the win column with Kasey Carlson swimming a 59.28. As an indication of how good she’s been this season, that breaks her 2012 Meet Record by over a second-and-a-half as compared to her swim here in 2012, and also broke Rebecca Soni’s record for the fastest swim in this series by almost the same amount.

The Bruins were back on top of the podium in the women’s 200 fly with yet another 1-2 finish. This time, it was junior Noelle Tarazona winning in 1:56.50, and her teammate Anna Senko taking 2nd in 1:56.85. That was Senko’s season-best time, and both times were very impressive for the Bruins in an event that they’ve been very good in recently as a program.

USC’s Chelsea Chenault, more typically a 200 freestyler, was 3rd in 1:57.01. As an indication of where she’s at, though not her primary event, that is a lifetime best for her (and she did swim that event at the Trojans’ mid-season invite, so it could be on her championship schedule.)

The two teams would trade wins through the first diving break, with USC sophomore Kasia Wilk putting up a season-best 22.24 in to win the 50 free, and UCLA senior Paulina Guzman besting Haley Ishimatsu on the 1-meter springboard.

Coming out of that break, USC took command of he meet once again. That started with another amazing swim and pool record from USC senior Kasey Carlson (47.78), followed by her teammate Wilk in 48.80. They were able to beat out UCLA’s Quah (49.44), with Carlson sprinting out to a big early lead and not looking back.

Next up, Stewart was a 1:53.54 in the 200 back. That’s an event in which she placed 4th at last year’s NCAA Championships, but with only one swimmer out of last year’s top eleven graduating, it will be a dogfight to maintain that spot this year.

She beat UCLA freshman Madison White soundly in that race; she was a 1:56.22 for 2nd.

USC won another race in the next event, event 11, the women’s 200 breaststroke, with a 2:09.86 from junior Andrea Kropp. That matches her mid-season swim from the UT Invite, and she was followed by teammate Meghan Hawthorne in 2nd with a 2:11.66.

Both teams will springboard off of this meet into the Pac-12 Championships with a lot of confidence. With still a month left until NCAA’s, however, it will take a deft touch by both coaches to maintain this speed through the end of the season.

I hate to ask, but I have to. Were both teams suited for this meet? These ladies put down some really impressive times no matter the time of the season, and if they weren’t suited Kendyl Stewart’s 100 fly would probably one of the fastest, if not the fastest, non-suited 100 flys.

You don’t have to ask. All you have to do is read the first couple of paragraphs.

That’s like a swimmer asking the interval when a workout is posted in front of his/her face!

As noted above, several Trojans did not swim all their best events.
Regardless, this was indeed a fast meet.

I meant to say “specialty” events.

Can anyone offer any insight on what is going on with jasmine tosky? How can it be that arguably the most versitile swimmer to ever come out of US high schools is only improving in her 200 fly? All her other times are not even close to her high school bests. A 1:49 for a swimmer who can go a 1:43.2 in the 200 free is very concerning . Hopefully something gives at PAC-12 or NCAAs so that she is back to her old self..