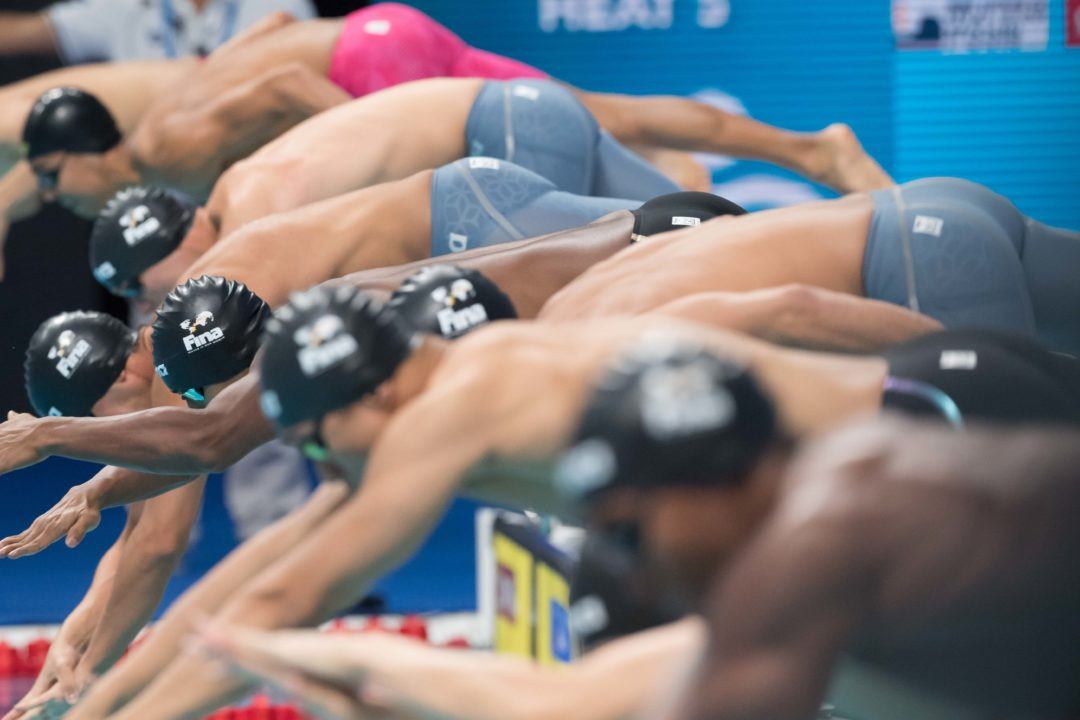 While USA Swimming has not formally released the contents of the Stu-Isaac-led review of technical racing suits for USA Swimming’s... Stock photo via Mike Lewis/Ola Vista Photography

While USA Swimming has not formally released the contents of the Stu-Isaac-led review of technical racing suits for USA Swimming’s youngest swimmers, a draft of the meeting minutes from the latest meeting of the USA Swimming Board of Directors includes the report, in its entirety, as well as the Age Group Development Committee’s reaction to it.

Specifically, Tim Bauer, USA Swimming’s Technical Vice Chair, said that the Age Group Development Committee supports banning the use of “tech suits” for 12 & unders. He also acknowledged that in spite of that general recommendation, there is still “considerable work to do” to better refine the idea, including enforcement and definition of what, exactly, a tech suit is.

Tim Bauer reported that the Age Group Development Committee is in favor of banning the 164 use of tech suits by 12 and under swimmers, but the Committee still has considerable work 165 to do before proposing a rule change, including defining what constitutes a tech suit is and 166 assessing how to enforce any such restriction (Attachment 14)

More details can be found on attachment 14, about midway through this PDF document, which includes a draft of the full report from the Isaac Sports Group, which was paid to conduct the study. The group interviewed coaches, parents, suit manufacturers, and team dealers, but not swimmers.

Among the interesting responses were that “virtually all the (suit) manufacturers agree that the high end/highest cost tech suits are not appropriate for use by younger swimmers.” Those manufacturers were generally against all restrictions, but said they “could live with” restrictions if they are included in the process of defining the rules and were given reasonable lead time to adjust their inventories and design.

The report concluded that “Based on our research, we find that the tech suit cost issue is an important issue, but not one that is driving people out of the sport or as significant an issue as initially assumed. The major concern of tech suit use is the impact on the development of young swimmers, potentially drawing focus, attention and resources away from the development priorities swimmers, coaches, and parents should be focusing on.” It also raised a series of questions that it wanted the Age Group Development Committee to consider, including whether it is in USA Swimming’s best interest to “micro-manage,” whether restrictions can be enforced fairly and consistently without overburdening officials, and whether new rules can “significantly influence” the current culture of tech suit use.

The Isaac Sports Group study indicates that the LSCs with tech suit restrictions already in place have exceptions to allow 11/12 year old swimmers to wear tech suits for championship meets and higher level prelims/finals meets (see pages 24 and 25 of the study). An exception like that already used in the other LSCs who have implemented tech suit restrictions for age group swimmers might be a beneficial common sense approach to addressing some concerns that people have with age group records not being broken as frequently following a ban as well as those who are concerned that a ban for swimmers older than 10 years of age might be an overreach.

This is needed to be consistent across states and LSCs. I have seen too many 8 and 10 year old girls in kneeskins. Unnecessary.

While I agree with what Tim and the committee are aiming to accomplish, I feel that there should be exceptions in place for those swimmers who are competitive at a higher level. While uncommon, we have all seen the occasional 12 year old at Juniors. Why should we stop a future Elizabeth Beisel, for example, from competing on a level playing field at high level meets if she earned the right to be in that level of competition in a non tech suit? I agree with the concept, but we have to have exceptions in place for the exceptions.

For the price of a parent’s monthly cigarette, alcohol, Starbucks, or weed habit you can buy an entry level tech suit. Tech suit decisions should be up to the parents, swimmers, or coaches and not in the hands of the LSC or USA swimming. In light of recent news, USA swimming needs to get it’s own house in order before they start telling others how run theirs.

While I still basically agree with you – I’m fine telling my swimmers they don’t need a tech suit until they’re teenagers, but what you do is what you do – but jeez, that’s a dickish way to get there.

People shouldn’t have to give up “vices” – read:things they like that you don’t support – for whatever dumb reason, buying a tech suit for their kids being one of them.

But, Steve, you are suggesting that swimmers give up tech suits because you don’t like them… Pot, kettle. Kettle, pot.

Although I do not disagree with banning these suits for younger kids at league meets and non championship meets, there are far more important issues that are being ignored. For example, there seems to be a general disregard for the number of young age groupers who use albuterol inhalers to enhance performance. At swim meets you can hear discussion among the parents about which doctor will prescribe higher dosages. Kids that can do a two hour practice of 7000 yards without needing a single puff of the inhaler suddenly need 6 puffs before a 50 free at a meet. This is a dangerous habit that is becoming more and more visible at meets. As we attend meets monthly we are… Read more »

lol what crooked LSC is this happening in?

And can someone else back up your claim that “more than half the kids are taking inhalers to the blocks?”

There are lots of statistics about inhaler use in youth sports. Heard a good one the other day talking about the Bradley Wiggins accusations – an athlete diagnosed with asthma does better at the Olympics, on average, than an athlete without asthma (at least, with and without being defined by whether they have a TUE for an asthma medication). Was a referendum on the abuse of the TUE system.

This became a big hullabaloo here in Houston when I was in high school. There was one club team that local media reported was basically doctor-shopping until they could get a diagnosis that gave their kid an inhaler. I think probably within the next 3 years (maybe shorter), inhaler abuse in… Read more »

I can’t wait for albuterol to turn into the new meldonium.

My daughter has asthma and couldn’t swim if it wasn’t for her inhaler. She requires her inhaler for practice as well. Albuterol is a 4 hour medicine, 2 puffs before a meet starts is all that is needed to prevent a life threatening asthma attack. We need to be careful and not punish the kids that truly need an inhaler because of the parents that feel like these children with asthma are getting an unfair advantage over their child. This is hogwash! For the record I have been in swimming for several years and have never seen a single inhaler at the blocks at any meet. Much less seen a swimmer do multiple puffs before multiple races.

Wow – I guess I’ve only once seen a kid use an inhaler suspiciously. Be careful not to judge without knowing the medical issues. There’s a kid on our team who almost died of ashrams/pneumonia when he was younger. Yes I see his mom reminding him to do his inhaler. Once should be enough though. It’s probably behind the blocks in case of an emergency. I have seen older kids drop out of the 1000 and 1500 with asthma attacks! Do you realize this can be life threatening?

Lastly the cholarmines in many… Read more »

I agree. Some children can’t breathe without their inhaler. Even with her inhaler (which is legal), my child has trouble breathing sometimes. It certainly doesn’t give her any advantages.
I am more concerned about certain swimmers possibly using testosterone or other type of anabolic substances. You get a little suspicious when you see an adolescent female with male pattern acne on their shoulders/back area and they have other signs of testosterone use. If I am correct, this is cheating and it gives them a significant advantage in strength and muscle recovery.

I do not get the ban. One report states tech suits not improve times. Okay…then it shouldn’t matter if a swimmer wears a tech suit. A report mentions cost to parents. This is like any sport. For example, baseball…not all cleats cost the same and not all bats are cheap. I don’t think cost on parents should play a factor. You don’t have to buy one. Level the playing field? I thought they proved they do not help with time?! There are things that add up in swimming such as hotel cost, gas to get to meets, coat to parents to buy a program or admission ticket to watch your kid swim. If they make finals, come back and pay… Read more »

Baseball is a team sport and kids share the bats.

Wrong SWIMFAN. My son plays baseball, he’s 9, and while there are league-supplied bats, many kids bring their own bat and some cost upwards of $400.
The best lesson those $400 bats teach kids is that THEY DO NOT HELP A KID HIT THE BALL. A ban would prevent a child from learning this valuable lesson through experience.

Goodbye national ag records you will be missed

Just like “goodbye world records” after the rubber-full-body suits were banned after 2009, right?

If I am not mistake since it was on a state by state basis. Over the summer a kid broke a NAG is a speedo.
Is that correct @brandenkeith?

Troy – it’s possible, don’t remember that off the top of my head though. If that information was shared, it was probably shared in the comments, not the article.

I think swimswam posted a video of the swim that why I remembered it.

Yeah like the 09 super suit ban was the end of world records.