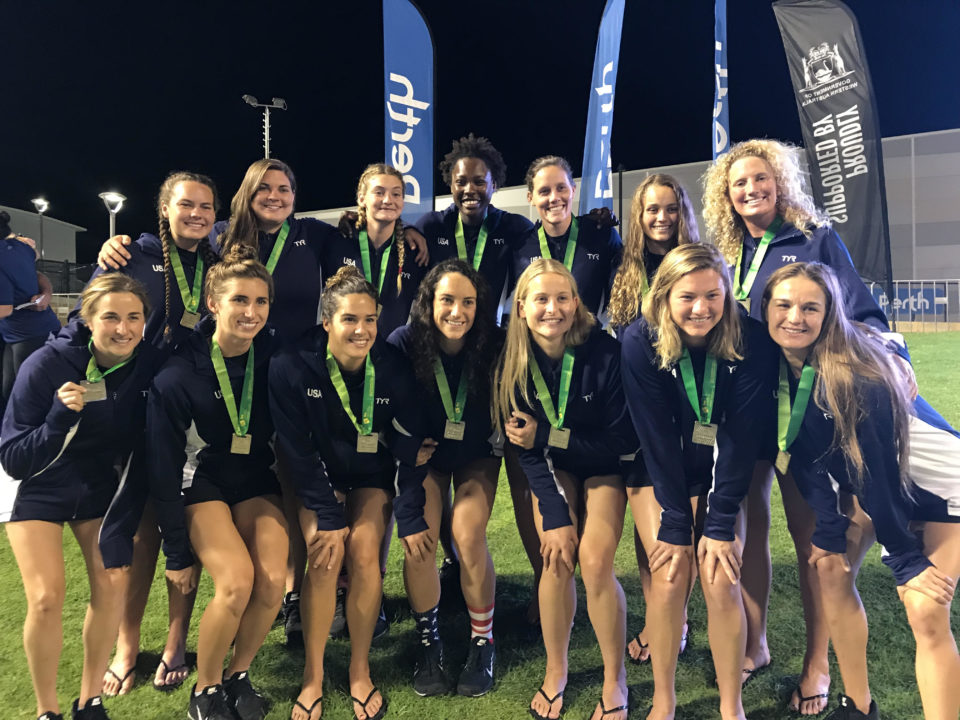 After cruising through five matches at the FINA Intercontinental Tournament with relative ease, the USA Women's National Team found themselves in a battle with longtime rival Australia in the title bout, claiming gold in a 14-12 shootout victory. Current photo via USA Water Polo, Peter Neushul

PERTH, Australia –  After cruising through five matches at the FINA Intercontinental Tournament with relative ease, the USA Women’s National Team found themselves in a battle with longtime rival Australia in the title bout. As is often the case when the two meet, it came down to the wire. This time Team USA prevailed, claiming gold in a 14-12 shootout victory in Perth. The win is Team USA’s second straight gold medal at this event and fourth title in the last five years. Stephania Haralabidis (Athens, Greece/USC/NYAC), Kiley Neushul (Isla Vista, CA/Stanford/NYAC) and Kaleigh Gilchrist (Newport Beach, CA/USC/NYAC) all scored two goals in regulation to lead Team USA with Ashleigh Johnson (Miami, FL/Princeton/NYAC) earning the win in net. All matches streamed live via subscription service FINA TV and can be accessed on-demand by clicking here. For the complete Team USA roster and schedule, click here.

Playing without captain Maggie Steffens (Danville, CA/Stanford/NYAC) who was injured during the semifinal victory over Canada, Team USA started the off the match tied at 3-3 after one. In the second quarter they surged ahead with a five goal burst to lead 8-4 at halftime. Team USA built their lead thanks to three penalty shot goals but missed out on a fourth that was disallowed due to the shooter moving forward on the release.

Facing a four-goal deficit in the second quarter, Australia battled back outscoring Team USA 2-1 in the third to inch closer at 9-6 going to the fourth. In the final period Australia held Team USA scoreless, while adding three more goals of their own to the tie the match, forcing the shootout. In the shootout, Team USA came up big hitting on their first shot, putting the pressure on Australia. Johnson followed by blocking the first attempt from Australia’s Isobel Bishop. From there Team USA made the rest of their shots leaving no need for the last Australian attempt, confirming the two-goal win.

The United States struggled on the advantage in regulation going just 1/6 but chased in on 4/5 penalty attempts while Australia was 4/7 on power plays and 1/1 on penalties. Johnson and Alys Williams (Huntington Beach, CA/UCLA/Huntington Beach WPC) were named to the all-tournament team with Head Coach Adam Krikorian named coach of the tournament.

“We are not in the best shape and we stopped attacking after halftime, but a great team like Australia, you can’t hold them down forever,” said USA Head Coach Adam Krikorian. “They were bound to score some goals. With not having Maggie Steffens on the team everyone had to play a little bit more and a little bit better, and thankfully they did.”

Simply a magnificent and continued trail of victories and unmatched water polo playing!
Brava’s to one and all!