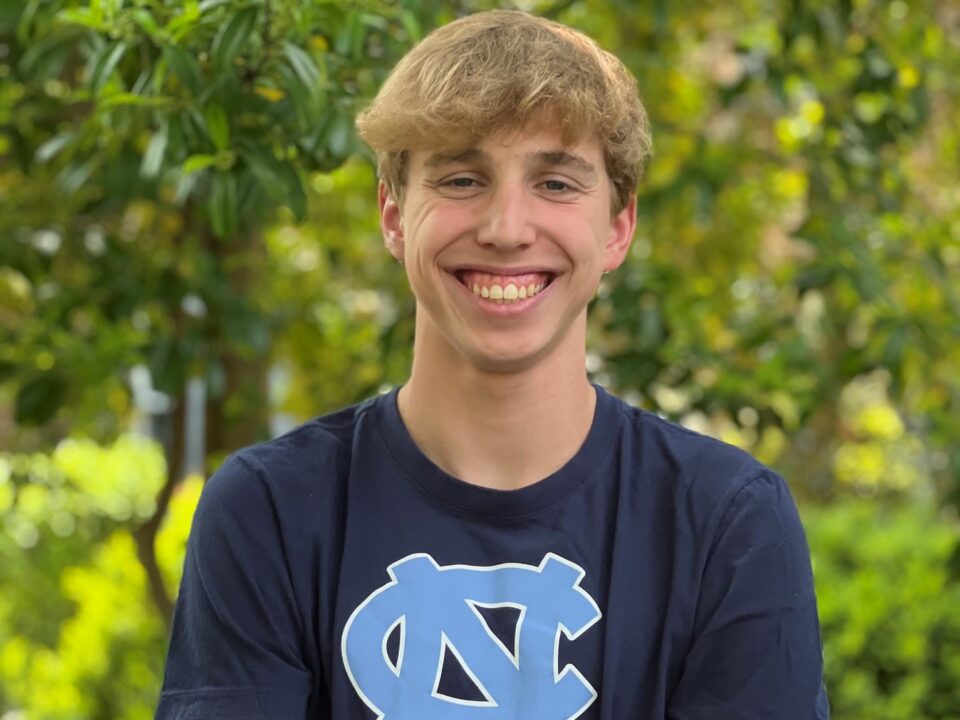 The weekend before Thanksgiving, SwimMAC Carolina held a uniquely-formatted two-day meet in Charlotte.

The result was a fun weekend of racing and new personal best times for two US Junior National Team members.

SwimMAC 15-year old Norvin Clontz won a single final in the meet, the men’s 200 yard freestyle. After a 1:53.20 in long course in prelims, Clontz swam a 1:38.79 in finals. For the high school sophomore, that took about four-tenths of a second off his previous best time in the event from March.

That first final of the meet set the stage for an exciting weekend, as he won an exciting head-to-head battle against his SwimMAC teammate Alex Ayers. Ayers was 2nd in 1:38.91.

Delmar was a relatively-late class of 2023 commit to North Carolina, not committing until April of this year. That is turning into a boon-of-a-signing for the Tar Heels: his 200 breaststroke would be the fastest on the Tar Heel team this season. His IM shift fits with what UNC is doing well right now: they have the #2 and #3 swimmers in the ACC this season in the 400 IM.

Maldari is committed to Florida, while Bartee is just a high school sophomore. Bartee is in the same class as Clontz and they both swim at rival North Carolina private schools, which led to a freshman head-to-head at last year’s North Carolina Independent School State Championships in the 200 free. Bartee won that race by two-tenths.

All of the swimmers mentioned above are racing at next weekend’s long course US Open Championships, so the split format gave them an opportunity to touch on long course racing in the middle of the traditional US short course season.

One of the most versatile swimmers in the class, Rainey is best-known as a breaststroker, but that 100 yard fly time was her best time by half-a-second. Her previous best time was done in July 2021 in her first meet back to racing after the COVID-19-pandemic-break.

In the 100 breaststroke final, she beat Nova of Virginia 15-year old Elle Scott. Scott, who is only 15, was 2nd in 1:01.17. That ties her lifetime best from October. Both swims are better than her season-ending 1:01.98 from last year’s NCSA Championships. She is currently the 3rd-ranked 15-year old nationally this season, just .05 seconds behind the national leader Raya Mellott from California.

A 1:01.66 from 15-year-old Avery Klamfoth won the B-Final. That ranks her 5th nationally at the age this season.

NOVA’s Kate Hotem, 15, and SwimMAC’s Molly Donlan, 17, had a great battle in the 200 yard backstroke final. Donlan took a big lead and was nine-tenths ahead as the two turned for the final lap. Hotem split 30.31 in the last 50, though, to close most of that gap.

4 years with Mark Gangloff & Co? Yikes. Count me out.