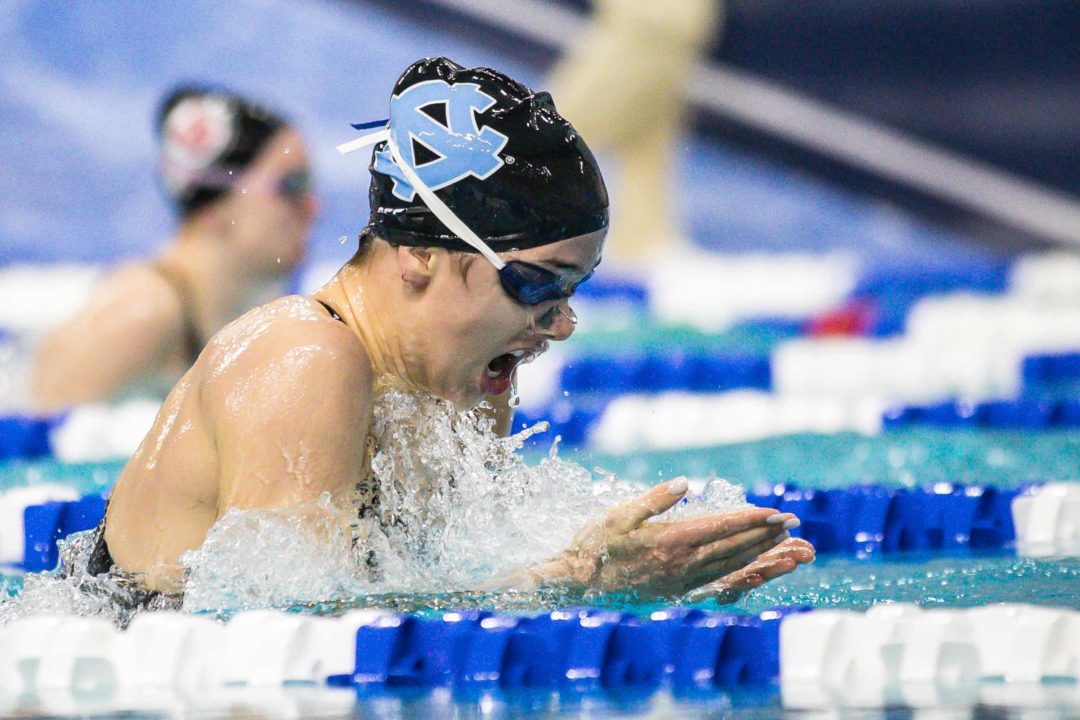 Thursday morning, UNC's Caroline Hauder went 1:55.59 in the 200 IM for third overall in prelims and her first PR in the event since freshman year. Current photo via Jack Spitser/Spitser Photography

It’s a young conference in the 200 IM – half of the A finalists are freshmen and one more a sophomore. There are also zero seniors in the top 8.

Virginia once again sits 1-2 on a morning where their top athletes are clearly showing up to compete. Kate Douglass broke the ACC meet record in a pretty casual swim for her, going 1:53.90. (Douglass was 1:52.84 earlier this season to set the conference record). Virginia junior Abigail Richter sits second; she was second in this event a year ago in 1:55.92 and was four tenths faster this morning.

Last year it was NC State going 1-2 in prelims. Defending champ Julia Poole was fourth this morning in 1:55.63, which is actually four tenths faster than she went in taking the top prelims spot a year ago. That shows how much faster the conference has gotten in this particular event.

That’s due to the influx of freshmen: Douglass, her teammate Ella Nelson (listed in results as Margaret), Notre Dame’s Coleen Gillilan and Louisville’s Abigail Hay. Nelson cut from a career-best 1:57.7 to 1:55.9 this morning. Gillilan shaved a hundredth from her high school personal best. Hay was the big dropper, going from a lifetime-best 2:00.4 out of high school to 1:59.1 in a first-chance meet last week to 1:57.28 this morning.

Even the returners are swimming much faster. UNC’s Caroline Hauder was 1:58.7 in prelims last year and took 8th in the final in 2:00. She went 1:55.59 this morning for third overall, a good early return for UNC’s new coaching staff.

Last year’s 3rd and 4th place finishers both missed the A final – that was Louisville’s Grace Oglesby and NC State’s Sophie Hansson. They’ll show down in the B final.

Once again, NC State and UVA are set up pretty well with scorers. Virginia has one more A finalist, but NC State put three into the B final and has three more scorers than Virginia in this event.