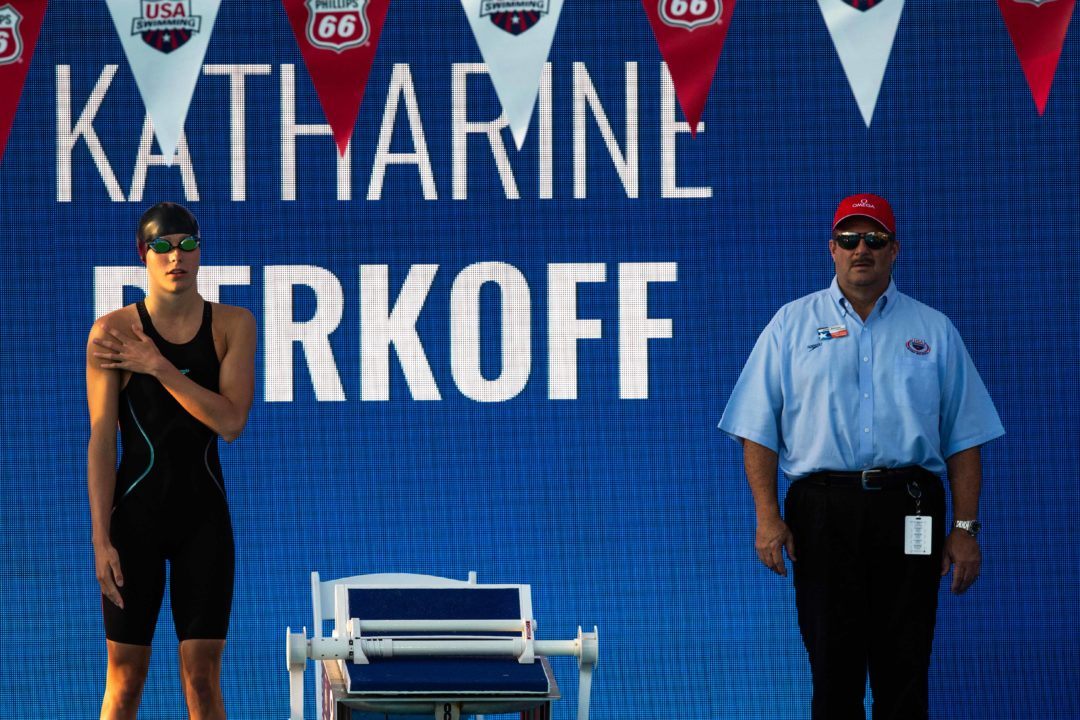 Berkoff's within a second of her lifetime best, a 1:50.13 from early 2019; that will likely go down tonight based on how she's looked this weekend. Archive photo via Mike Lewis/Ola Vista Photography

NC State sophomore Katharine Berkoff has been on fire this weekend, going one of the fastest 50 back swims ever (23.60) and popping a lifetime best and nation-leading 50.40 in the 100 back last night. This morning, she continues her lights-out weekend with a prelims top time of 1:51.11 in the 200 back. She’s within a second of her lifetime best, a 1:50.13 from early 2019 before she started her collegiate career; that will likely go down tonight, based on the way she’s been swimming, and we could see a sub-1:50 performance.

Her younger brother and NC State freshman, Mikey Moore, led the men’s 200 back prelims with a 1:42.93, his first time under 1:45. His junior teammate John Healy (1:43.29) also went a best time for second, as did another member of the Wolfpack, sophomore Kevin Childs (1:43.66). Childs was fourth, and he had a huge drop, shaving over three seconds off of his former best. UNC senior Chris Thames was sandwiched in at third this morning (1:43.63).

Pro sprinter Michael Chadwick torched the men’s 100 free field, posting a 42.00, off of his best of 40.95 from the 2017 NCAA Championships. The Mizzou alum is now attached to North Carolina Aquatic Club and is training under UNC head coach Mark Gangloff. He finished ahead of NC State sophomore Hunter Tapp, who slipped under 43 (42.94), and UNC senior Tyler Hill (43.07); both Tapp and Hill clocked best times.

Other event leaders on day 4:

Easy to forget Chadwick is in the exclusive 40 point club. Just because he finished a mile behind Dressel in that race doesn’t mean that’s not a seriously impressive PB.