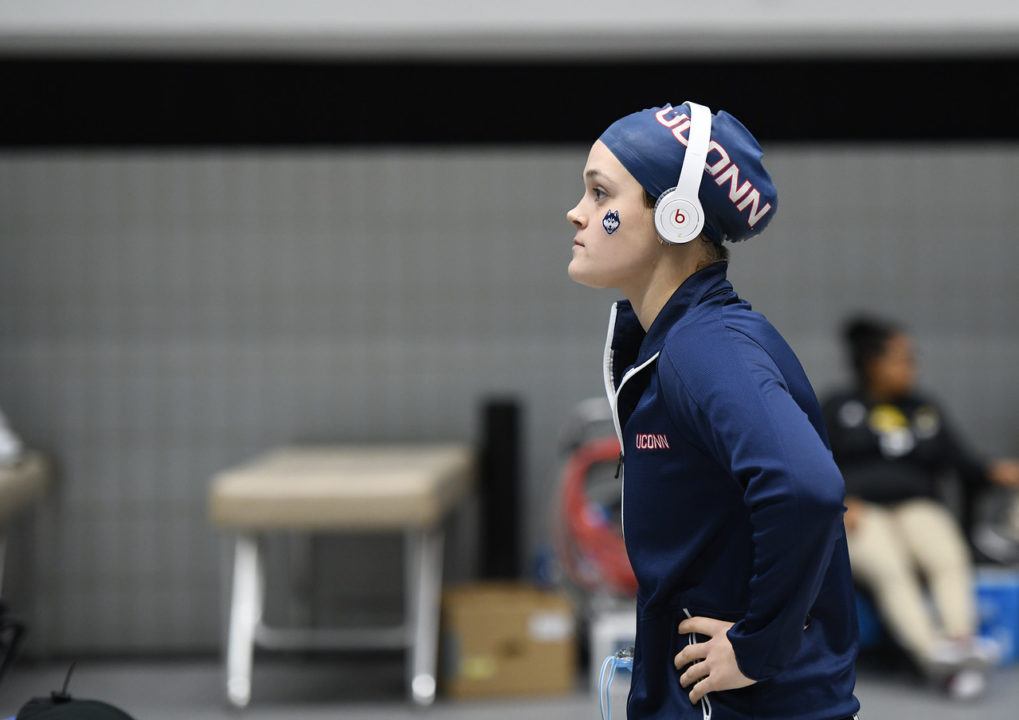 After an impressive dual meet win on Friday night against Boston College, the UConn swimming and diving team was back in the pool less than 24 hours later and put forth a solid performance en route to wins against Williams College and Boston University on Saturday afternoon at the Wolff-Zackin Natatorium. Current photo via UConn Athletics

STORRS, Conn. – After an impressive dual meet win on Friday night against Boston College, the UConn swimming and diving team was back in the pool less than 24 hours later and put forth a solid performance en route to a win against Williams College and Boston University on Saturday afternoon at the Wolff-Zackin Natatorium.

UConn was impressive in the 200 IM with David May, Markus Hunter, Matt Dagenais and Joey Homan securing the top four spots in the event.

Diver Torrington Wagner swept the diving events with a pair of victories on Saturday. The sophomore scored a 259.85 to win the 1M and a 282.05 to capture first in the 3M.

UConn was exceptional on the boards with the Huskies taking the top three spots in both the 1M and 3M Dives. Corres grabbed a runner-up finish in the 1M while Kyle Kennedy secured the runner-up spot in the 3M.

UConn secured wins in both relays, as well, with Kearsey, May, Hunter and Kyle Dunlap takin first in the 200 Medley Relay (1:31.79) that set a new pool record. Kearsey, May, Dunlap and Emils Jurcik closed out the meet with a win in the 400 Free Relay in 3:03.56.

Sophomore Ryan Dulaney and senior diving captain Monica Marcello led the way for the Huskies with a pair of wins on Saturday. The long distance swimming, Dulaney, delivered with wins in the 500 Free and the 1000 Free for the second consecutive day. The Naperville, Ill. native won the 1000 by .19 seconds with a time of 10:25.23.

UConn closes out the fall semester and resume with their Winter Training Camp on Jan. 2 before heading on the road to Hanover, N.H. to challenge Dartmouth on Jan. 12 at 4 p.m.

Trevor Winans was the top performer for the Terriers, winning both the 200 and 50 free. Adam Orringer-Hau also picked up a first-place finish, taking the 100 free. Judson Balding and Stuart Vickery also recorded strong efforts on the day, as Balding finished second in the 50 free, while Stuart Vickery posted a second-place finish in the 100 fly.

Coming off its first win at the Terrier Invitational since 2010, the Boston University women’s swimming and diving split with Williams college and UConn Saturday afternoon at Wolff-Zackin Natatorium in a double-dual meet.

Sydney Lee continued her strong sophomore season, touching the wall first in both the 200 and 100 free. Julimar Avila also topped the podium as she earned the top finish in the 100 fly. Allison Winter and Carly Soares each tabbed second-place finishes, as Winter competed in the 100 back, whereas Soares claimed the runner-up spot in the 500 free.

BU will return to the pool Saturday, Jan. 12 at Colgate.

Since there were no 200s of strokes in the meet, the Ephs tried their hand at a majority of sprinting events. In the 100 backstroke, freshmen Abby Matheny and Gabby Granata placed fourth and fifth overall, both going in season best times (1:00.46 and 1:00.75, respectively). In Molly Craig ’21 swam the 200 IM and placed second overall, going an in-season best time proving her versatility as a swimmer (2:07.07). The 100 breaststroke was won by Caroline White ’20 (1:05.23). She had a strong back half, allowing her to get her hands on the wall first.

Additionally, the Ephs swam distance events, with the 1000 freestyle controlled by Molly Craig ’21. She swam a strong race, ultimately getting outtouched by a UCONN swimmer. She placed ahead the of the remainder of the field, dropping 10 seconds from her 1000 swam previously in the season (10:25.52). In the 500 freestyle, Laura Westphal ’21 placed third, behind a UCONN and BU swimmer.

In diving, Gabriella Mercier ’21 placed seventh on both boards. She had a solid performance today and is gearing up for her upcoming meets.

On the Ephs’ performance today and the season ahead, Coach Kuster says, “I saw some very good things today and some things that we need to address in order to be where we want to as the season progresses. I thought our energy was good and in general we competed well.”

In their second meet weekend of the season, the Williams College men’s swimming team went head-to-head with two Division I teams, Boston University and the University of Connecticut. Despite losing both meets, the Ephs gained some valuable race experience, and were able to post some fast swims and season best times. UConn 174, Williams 60. BU 142, Williams 80.

In the first individual event of the afternoon, Jackson Karofsky ’21 unleashed a monster come-from-behind victory in the 1000, taking the win in a tight battle with UConn in a NESCAC-leading time of 9:37. Later, Karofsky followed up this victory with a third place finish in the 500 free, finishing in a solid time of 4:42.35.

The 50 freestyle featured the return of Zhang, who lowered his season-best time from the Union College meet to finish in a time of 21.6. His high-school teammate, Sean Tan ’22, did the same in the 200 IM right after, dropping his season best down to a 1:57, with a monster closing 50.

The 100 fly featured another season best, where sophomore David Pearcy dropped the hammer in a time of 51.40. First year Aaron Stanton unleashed a 100 freestyle only half a second off of his best time, destroying his in-season best and touching for third place in a time of 47.19. Two more Ephs, Lovette and Curtis Maher ’19 joined him under the 48-second mark.

The 100 back was another first year dual, featuring the leadoff legs from the medley relay. Ultimately, Whitcomb followed up his medley relay split with a third place finish of 53.09, featuring a tightly split back half. Leclerc had a great swim as well, touching only a hair behind in 53.26.

When asked about the meet, Head Coach Steve Kuster commented: “There were some bright spots for sure, and some things that will need to get better. It was good for us to see this kind of competition; it forced us to raise our game. I hope we can continue to find new levels as the season progresses.”