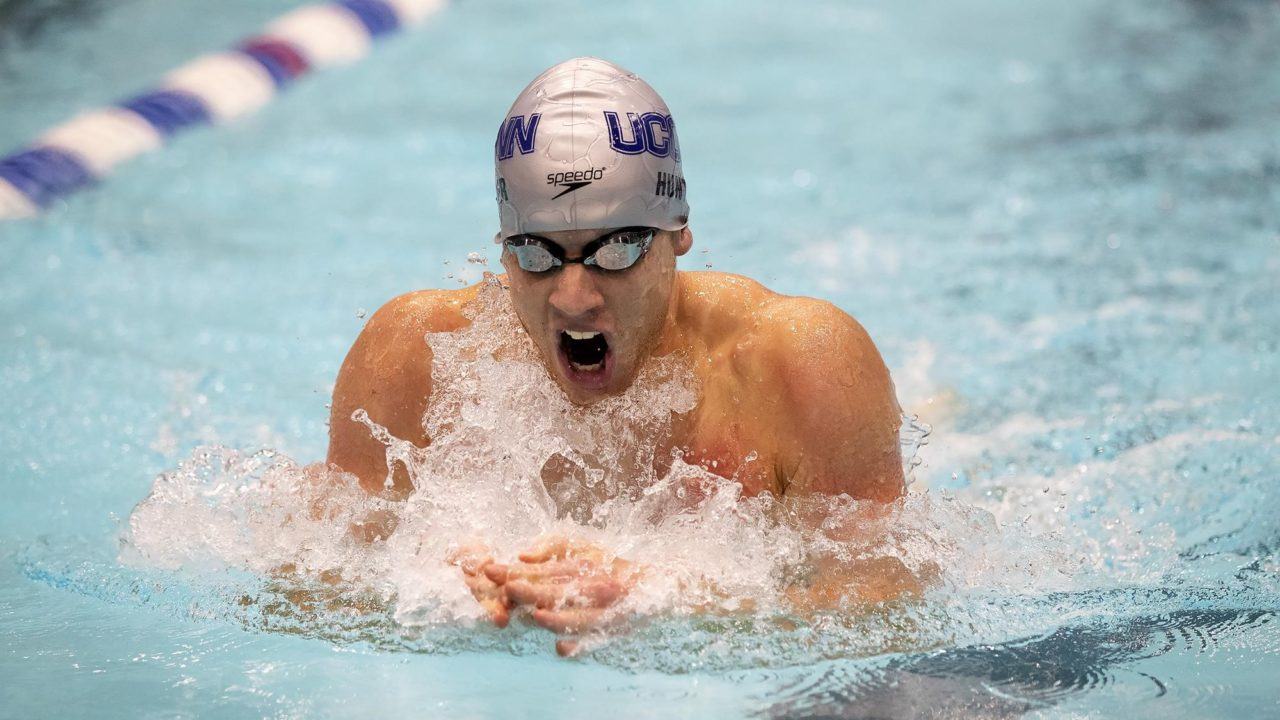 The UConn men's swimming and diving team celebrated Senior Day with a 183-106 victory against Villanova at the Wolff-Zackin Natatorium on Saturday afternoon, while the women fell to the Wildcats 168-132. Current photo via UConn Athletics

STORRS, Conn. – The UConn men’s swimming and diving team celebrated Senior Day with a 183-106 victory against Villanova at the Wolff-Zackin Natatorium on Saturday afternoon.

The Huskies honored their four seniors prior to the meet with Mark Hunter, Anthony Dell’Isola, Luke Martin and Matt Dagenais being recognized. The four seniors wrapped up their final dual meet by swimming together in the last event of the day, the 400 Free Relay.

Hunter highlighted his Senior Day with a first place finish in the 100 Breast (56.57) that capped a sweep for the Huskies in the event. Freshmen Colby Prouty and Josh Bryant grabbed second and third, respectively. Hunter raced to a top spot finish in the 200 IM with fellow senior Dagenais earning a runner-up spot in the event. The South African native also swam the second leg in the Huskies 200 IM Relay victory.

The UConn women’s swimming and diving team lost its final dual meet of the season against Villanova, 168-132, while celebrating Senior Day at the Wolff-Zackin Natatorium on Saturday afternoon.

The Huskies honored their five seniors prior to the meet with Julie Hu, Monica Marcell, Annika Grewal, Maddy Blair and Jackie Van Lew.

Diver Monica Marcello capped a memorable career with a spectacular final dual meet in Storrs. The Middletown, Conn. native won both the 1M and 3M dives and set a new pool record with a mark of 356.70 in the 3M.

“Every so often in collegiate athletics, a Coach has the good fortune to witness a superlative performance by one of his/her Student Athletes that transcends the word,” said head diving coach John Bransfield.  “In an effort to convey for the media, the fans or the casual observer, many at the Wolf Zackin Natatorium today witnessed absolute brilliance. Monica Marcello had it all working far beyond her previous best. The “heavens” were in her favor today, and she set both school and pool records while making it look easy throughout her three meter competition. In spite of having had some debilitating setbacks the past two years, she has pushed through in order to complete her career on a high note this semester.  Today, Monica simply yielded to a wiser self and stayed lighter and more fluid, allowing the springboard to do the heavy part.  Her approach worked marvelously.”

“Monica has left a mark on the UConn Diving program in ways that cannot be measured by records.  A vocal leader and an inspiration by example, Monica’s spiritual leadership will be remembered long after she is finished with tricks at the deep end of a pool.”

Jackie Van Lew wrapped up her Senior Day with a win in the 100 Freestyle and runner-up finish in the 200 Free.

Other highlights from the meet included a sweep in the 200 Breast. Freshman Katelyn Walsh captured the top spot while Julie Hu and Kiley Stolter rounded out the podium. Walsh also earned a first place finish in the 100 Breast (1:05.70). Ryan Dulaney secured a pair of runner-up finishes in the 500 and 1000 Freestyle events.

The Huskies will have their final tune up for the American Athletic Conference Championships (Feb 27-March 2) with the Husky Invite on Saturday, Feb. 2 at the Wolff-Zackin Natatorium at 1 p.m.

STORRS, Conn. – The Villanova men’s and women’s swimming and diving team competed in a dual meet against UConn in Storrs, Conn. The women walked away with a 168-132 victory over the Huskies, while the men returned to Pennsylvania shorthanded after falling 183-106.

The Wildcat women placed first in 11 of 16 events, yet again this season. Nicole Welch, Darby Goodwin, Kelly Montesi, Milly Routledge, Taylor Wilson and Alexa Fabbri all swam to at least two place finishes on the afternoon.

Fabbri and Wilson’s other top times came in the 50-yard free where they simultaneously touched the wall at 24.16, in the 200-medley relay Wilson and her squad finished in 1:45.55. Routledge, Goodwin and Rayann Jaryszak were those among the medley relay.

The 200-butterfly is also where Elise Pidutti secured a first-place spot for the Wildcats coming in at 2:04.64.

On the men’s side, there were four first place finishers. Justin Cucchi and Michael Perra were the lone ‘Cats to secure individual wins. Cucchi recorded a time of 1:56.26 in the 200-IM, Francis Prikasky (2:00.78) and Jackson Kabas (2:01.32) followed behind in first and second. Perra placed first in both the 1- and 3-meter dives for the second straight meet. On the high board he scored a 303.45 and on the low board he scored a 298.80. Joe Swindal came in second on the high board with his score of 245.18.

The Wildcat men also placed first in the 400-yard freestyle relay. Jordan Fetterman, Jesse Marsh, Steven Krecsmar and Luke Sabal clocked in at 3:12.01 for the top spot. John Davidson, Alex Klippel, Francis Garvey and Noah Chernik came in second with a time of 3:27.74.

The Wildcats compete again when they welcome Penn State for their last dual meet of the season on Friday, Feb. 1 at 4 p.m. The following day Villanova will host the Nova Sprint Festival in the Villanova Swim Complex starting at 11 a.m. and celebrate senior day.